Obama: Let's Face It, These Republicans Are Practically ISIS Recruiters 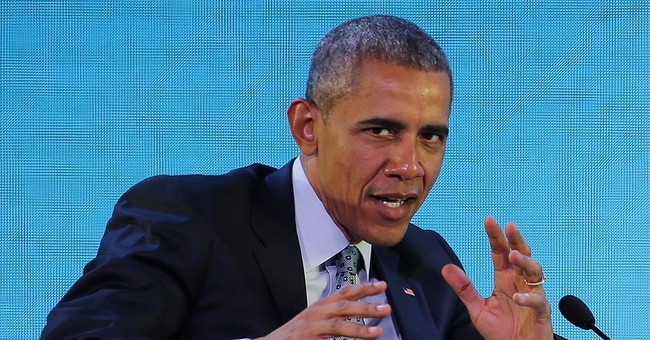 First the Kerry disgrace, then this. Our president is the world's most powerful Internet troll:

During his APEC address tonight, President Obama had some tough words for Republicans refusing to take in Syrian refugees. Yesterday he said that not taking in refugees would violate America’s values, but today he got much, much tougher in going after them. He said the “fear and panic” only serves to make the situation worse if everyone’s basing their judgments on “hysteria or an exaggeration of risks.” ..."I cannot think of a more potent recruitment tool for ISIL than some of the rhetoric that’s coming out of here during the course of this debate,” [he said].


Here we have the President of the United States demagoguing his domestic opponents, while abroad, in the wake of a devastating terrorist attack against the West.  As virtually everyone has noticed by now, Obama reserves his most impassioned denunciations for his political foes; the massacre in Paris was a "setback," but damn these Republicans and their rhetoric.  First of all, it's preposterous to suggest that a roiling debate at home over refugee vetting is ISIS' most potent recruiting tool -- but considering the source, it's not a surprising assessment.  Barack Obama has been comprehensively wrong about ISIS at virtually every turn.  He failed to anticipate their precipitous rise as a direct consequence of his reckless withdrawal from Iraq.  He failed to recognize the threat they posed when he drew and abandoned his "red line" against Assad.  As they gained force, recruits and territory, he sniffed that ISIS' potency was equivalent to that of a "javyee team," then tried to pretend he'd never said that.  And hours before they pulled off a series of sophisticated, deadly assaults in a Western capital, he described their reach as "contained."  His administration is now assuring us that the organization lacks the capacity to perpetrate an attack on US soil -- so sleep well, America.  It's the allure of toxic Islamist theology, coupled with success, that has proven to be the terrorist army's strongest recruitment asset.

Second, Obama's framing of Republicans as terrorist recruiters is just the latest iteration of the facile narrative that any proposed course of action or commentary that deviates from the Left's prevailing pieties would result in giving the terrorists "exactly what they want," or something.  The list of no-no's includes, but is not limited to: Raising concerns about admitting under-vetted refugees into the United States, tying the Islamic State's actions to Islam, detaining terrorists at Guantanamo Bay, and both bombing the terrorists and fighting them on the ground.  Interestingly, one arrow in America's national defense quiver that is regularly exploited by terrorist groups to attract new members is our drone program, which President Obama has dramatically expanded.  Should we stop raining hellfire on hardened jihadis in order to deprive them of a "recruitment tool"?  Sure, we're liquidating terrorists, but isn't that exactly what they want?  What utter, juvenile nonsense: "Shut up, you're helping the terrorists."  End of discussion.

Finally, to the shock of nobody, Obama is torching a straw man here.  Yes, he's exploiting Chris Christie's remarkably poor framing of the issue, but the idea that Republicans are "scared" of orphaned toddlers is ridiculous on its face.  (They also aren't cowering over debate moderators, just unwilling to sit idly by amid ideological hack jobs). In light of the events in Paris, and the apparent role that refugees -- or jihadis posing as refugees -- played in the plot, our government has a solemn responsibility to ensure that individuals being welcomed into the country do not pose a threat to the safety of US citizens.  Between this worrisome story from 2013 and the FBI director's admission that current vetting protocols are far from airtight, these concerns aren't the stuff of crackpot paranoia.  A new House bill that would halt the influx of refugees while tightening up the review process (screening for threat level, not religion) seems sensible.  Here's Speaker Ryan striking an adult, unifying tone, in contrast to the president:


Incidentally, Obama isn't just fending off criticism from Republicans.  Several prominent Democrats have broken with him on refugees, on the tenor and content of his post-Paris comments, and on his failed anti-ISIS strategy.  Thin-skinned people do not handle criticism well, which likely explains Obama's unseemly tirades and misplaced anger this week.  The White House briefed US governors yesterday, 31 of whom have announced opposition to settling Syrian refugees in their states under current conditions.  Administration officials reportedly stiff-armed governors' requests for more information and transparency, angering the Democratic governor of New Hampshire, and stirring frustration from California Gov. Jerry Brown (D), who's inclined to support the administration's overall policy. The Obama White House is terrible at persuasion, so motive-impugning insults rule the day.  I'll leave you with a withering critique of both Obama and Hillary Clinton from Carly Fiorina.  Her opening answer is strong, but stay tuned for her points about what we now know about the ISIS-related threat matrix, and our national security apparatus' capacity to handle it:


By the way, ISIS has explicitly stated that they intend to infiltrate the West amid the mass refugee migration, a "huge concern" acknowledged by the US Director of National Intelligence, and they're actively following through on that approach.