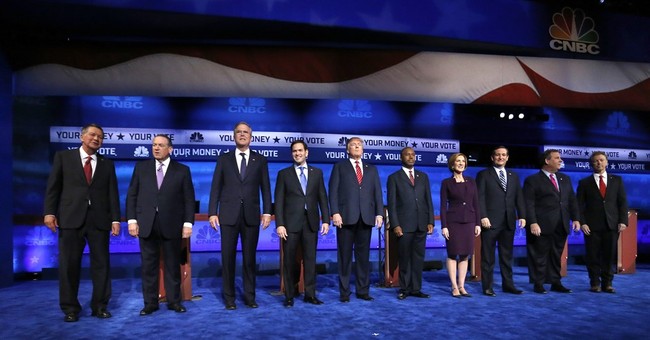 Tonight's Republican candidate forum will primarily be remembered for two things, I suspect: (1) CNBC's truly awful moderation, and (2) the beginning of the end of Jeb Bush's presidential campaign.

CNBC: Between the parade of gotcha questions, sloppy moderating, and factual errors, this was an evening to forget for the host network. Almost every single candidate on stage directly called out the slanted nature of the coverage in real time, punctuated by memorable slap-downs from Marco Rubio and Ted Cruz. Co-host John Harwood, whose inclusion on the panel irked conservatives from the moment it was announced, was especially tendentious and argumentative -- repeatedly interrupting candidates and semi-reprising a blown fact-check about Rubio's tax plan. Harwood had admitted his previous mistake on Twitter, but didn't clarify this point on the air when Rubio pushed back. The entire enterprise, from the production values, to the overall focus, to the flow of inquiries, was embarrassing. Incidentally, why was there no conservative media partner for this broadcast? Was that not a requirement this cycle?  (Update: An RNC source tells me CNBC's Rick Santelli constituted the "conservative element" of the forum).

Jeb Bush: The former Florida Governor is a decent and honorable man with some excellent ideas, and a strong record as his state's chief executive. He has underwhelmed in this campaign, fading in the polls to such an extent that tonight felt like it might represent a final opportunity to spark a comeback. He fizzled. When Bush tried to take a hard shot at Marco Rubio's missed Senate votes early in the proceedings, Rubio was prepared with a strong counter-punch. It landed. The crowd roared. And it was lights out for Jeb:


Based on the exchange above and several additional strong answers, including this stirring take-down of Hillary Clinton and her abettors in the mainstream media, Marco Rubio emerged as a clear winner of this debate. A defining moment:


He was poised. He was on-message. He was winsome. And he was granular in his policy knowledge. Another candidate whose star shone brightly was Ted Cruz. His early barrage against CNBC's coverage, listing every objectionable question that had already been asked, was perfection. He channeled every conservative sitting at home and shamed the moderators to their faces. Cruz was also strong on entitlement reform, smooth on job creation, and disciplined in introducing and hyping his new tax plan.

Chris Christie also turned in a strong performance, emphasizing necessary truth-telling on entitlements, routinely circling back to the broken promises and failures of big government, and producing this incredulous soundbyte on the unseriousness of the debate. An instant classic:

.@ChrisChristie: “We have $19 trillion in debt. We have ppl out of work. We have ISIS & Al Qaeda...& we're talking about fantasy football?!"


Carly Fiorina was very good. She didn't steal the show as she did in her previous outings, but she once again showcased her smarts and preparedness. Like Christie, she never seemed to miss an opportunity to build an ideological, big-picture case against ever-growing government. Her closing statement casting herself as Hillary Clinton's "worst nightmare" whom Republicans would love to see in a one-on-one debate setting resonated.  But was tonight enough to regain some of the polling steam she's lost since the Reagan Library debate?

The leaders of the pack, Ben Carson and Donald Trump, both had good moments. Carson parried a loaded question about homosexuality and marriage quite well (in an answer that could have served as an advertisement for End of Discussion), and Trump is a master of drawing eyeballs, attention and laughs -- important skills for any politician. But each man issued flat denials on challenges brought by moderators that turned out to be untrue; Carson on his involvement with a shady company accused of unethical practices, and Trump on statements he made about immigration policy. Not only did Trump say what he indignantly denied on air, he said it on his own website.  Oops:

Trump says he never called Mark Zuckerberg Rubio's "personal Senator." It was in his position paper on immigration. pic.twitter.com/LY5BSrIcE8


Rand Paul was principled, Mike Huckabee was glib, and John Kasich was feisty -- but I'd be surprised if any of them moved the needle much.  All told, the third GOP debate was the night CNBC humiliated itself. And it marked the point of no return for an establishment titan -- whose campaign seems to know it:


He and his SuperPAC's still have a lot of money, and he's built a formidable operation, so Bush's demise may be overstated.  But his campaign suffered a very serious blow this evening.  Quite possibly a mortal one. I'll leave you with this.  Just perfect:

Editor's note: This post was updated to more accurately reflect the history and context of the Rubio/Harwood dust-up.