Blame Game: Obama Insists He Bears No Responsibility for Chaos in Iraq 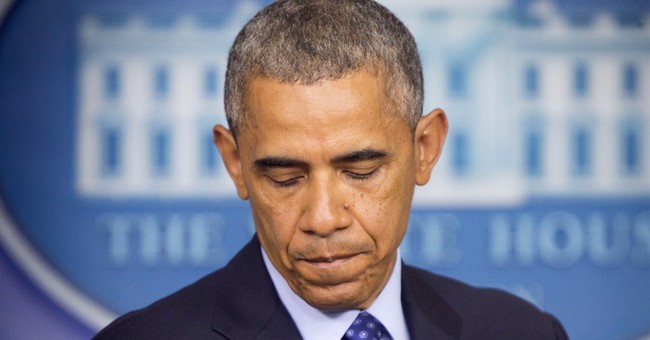 Dan covered this afternoon's presidential press conference on Iraq, with the biggest news being the announced deployment of 300 US special forces operators into the country. As expected, President Obama repeatedly stressed that these troops will fulfill an explicitly non-combat role, promising that no US forces will return to combat duty in Iraq. He did, however, say that the military is prepared to take "targeted and precise military action" of the situation warrants it. He's presumably speaking of airstrikes against ISIS targets from drones or manned aircraft. Obama placed a great deal of emphasis on Iraq finding a "political solution" to its troubles, praising the nation's multi-sectarian elections in recent years. In doing so, he nudged Iraqi President Nouri al-Maliki to step down -- a heavily hinted call for, well, regime change. A Maliki spokesman quickly shot down the implication. Obama's politically-focused message and demands for a more inclusive Iraqi government seemed wildly out of step with realities on the ground. Of course a political solution is the goal, but the country's on fire right now, with hardcore militants controlling massive swaths of land and threatening to lay siege to the capital city. Iraq's political situation isn't the issue at the moment:


If the extremists' march continues, there will be no country remaining to govern, and in its wake will be a failed state awash with anti-American, anti-West jihadists. Obama explicitly conceded this scenario poses a genuine threat to US national security, yet his solution to the urgent, full-blown crisis is to send in a few hundred troops in an advisory role...and possibly some bombing. Maybe. Administration critics have argued that the bloody chaos was predictable and avoidable. As a candidate, Obama proposed pulling American forces out of Iraq in a careful and responsible manner. Part of his stated vision included a residual pool of US troops in Iraq, whose mission would be to fortify the Iraqi military and to repel serious threats from terrorist groups. Such a force could have prevented today's disaster, but it never materialized. Asked by CNN's Jim Acosta whether he regrets the failure the secure a status of forces agreement (SOFA) needed to make that happen, Obama insisted that there's nothing to regret because it wasn't his fault:

It is true that the Maliki government tossed up roadblocks to an acceptable SOFA in 2011, a decision they likely regret. It's also true that Maliki's leadership has left much to be desired. But the United States of America was not a helpless bystander in the SOFA negotiations. The Obama administration was a derelict, disinterested actor. Despite months of efforts from some US officials, the White House pulled the plug on wrapping up a needed SOFA prior to all options being exhausted:


As recently as August, Maliki's office was discussing allowing 8,000 to 20,000 U.S. troops to remain until next year, Iraqi Ambassador Samir Sumaida'ie said in an interview with The Cable. He told us that there was widespread support in Iraq for such an extension, but the Obama administration was demanding that immunity for U.S. troops be endorsed by the Iraqi Council of Representatives, which was never really possible. Administration sources and Hill staffers also tell The Cable that the demand that the troop immunity go through the Council of Representatives was a decision made by the State Department lawyers and there were other options available to the administration, such as putting the remaining troops on the embassy's diplomatic rolls, which would automatically give them immunity.


Go back and read Josh Rogin's entire contemporaneous piece at Foreign Policy from 2011. It underscores the depressing reality that the current mess -- including Iran's exploitation of a power vacuum -- was predicted at the time. Obtaining an adequate troop agreement required American leadership. President Obama failed to provide it. And the rest is history, no matter where he tries to point the finger. To be fair, Obama and his defenders will understandably argue that he opposed the Iraq War from the beginning -- and most Americans have come around to that point of view. But being correct on that judgment (again, based on public opinion) does not absolve him of his dead-wrong assessment of the Iraq surge, nor does it let him off the hook for Iraq-related decisions he's made as Commander-in-Chief. He campaigned for that office. He promised to withdraw the US from Iraq safely, while protecting our extremely hard-fought gains there. He's failed to deliver, and the world is less safe because of it. "Bush was wrong in the first place" is a compelling political argument. But Obama took over and made decisions of his own, for which he is responsible. Don't forget that Obama inherited a relatively stable Iraq. I'll leave you with James Oliphant describing the White House's Iraq predicament as a political "nightmare:"


Already swamped by domestic and foreign crises, Obama finds that even his self-proclaimed successes are at risk. That's just about the last thing he needs now....More than anything, these events and others have served as a rebuke to Team Obama's worldview that a new generation of leadership could move on from both the Clinton-era and Bush-era policies. Both of those administrations were more hawkish and aggressive about the exercise of American power, whether it was to intercede in regional conflicts in the Balkans or take down Saddam Hussein's regime in Iraq. Disdainful of much of Washington's foreign policy establishment, Obama and his close-knit circle of advisers, on the other hand, talked about engaging Iran diplomatically, using sanctions to punish bad actors, "pivoting" to Asia, and neutralizing the threat of terrorism more bloodlessly through the use of drones. They viewed American power in terms of limits. This was a president, after all, who opposed the U.S. "surge" that arguably stabilized Iraq to the point where Obama could pull the troops out. Yet here was Obama on Thursday using the language of presidents past such as John Kennedy and George W. Bush, talking of sending "advisers" into a global hot spot and warning of the need to deny "safe haven" to terrorist groups. "Right now, this is the moment when the fate of Iraq hangs in the balance," he said—something that sounded So 10 Years Ago. That's why Obama's remarks had to have left such a bitter taste. Iraq was a box that his administration had checked. And already, the unrest there is casting fresh doubt on his decision to leave Afghanistan just a few years removed from calling for his own "surge" there.


Speaking of Afghanistan, administration officials are assuring the public that a full US pullout from that country along an announced timeline won't precipidate a violent re-run of Iraq. Because...why, exactly? A new NBC/WSJ poll measures the president's job approval on foreign policy 20 points underwater (37/57), and a fresh NPR poll of 2014 battleground states voters shows the GOP with a large advantage on foreign affairs. I'll leave you with this:


So did Obama not want a SOFA (2012)? Or did he want one, but Maliki is responsible for killing it (today)?
Grand Jury Indicts Dem Attorney in Durham Investigation
Rebecca Downs
Daughter of Marine Killed in Kabul Terrorist Attack is Born
Rebecca Downs
New Emails Show Teachers' Unions Strong-Armed Biden Administration on School Mask Policy
Matt Vespa
Sean Spicer Speaks Out on Jen Psaki's Going After His Military Record: 'The Gloves Are Off'
Rebecca Downs
Poll: What Democrats Think About Biden Serving a Full Term May Surprise You
Rebecca Downs
GOP Rep Slams Biden Administration’s Pro-Abortion Agenda: Our Laws Must Uphold the Value of Each Person’s Life
Madeline Leesman
CARTOONS | Steve Kelley
View Cartoon
Most Popular