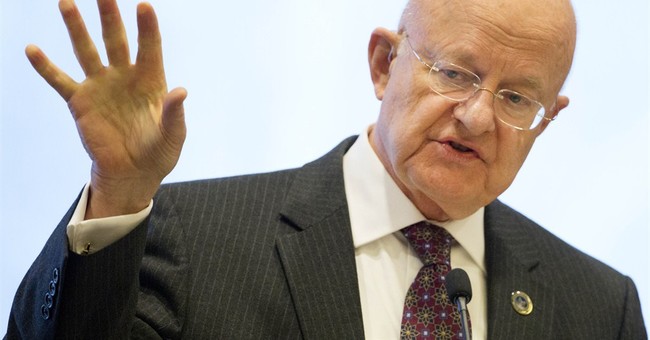 The civil war in Syria has created a refugee crisis in the millions, overwhelming a number of European nations that are struggling to cope with the influx. While critics are accusing the U.S. of being slow to respond, this may be a good thing given what James Clapper, Director of National Intelligence, had to say on Wednesday about the Islamic State’s ability to infiltrate the crisis.

“As they descend on Europe, one of the obvious issues that we worry about, and in turn as we bring refugees into this country, is exactly what’s their background?” Clapper said at an annual intelligence conference. “We don’t obviously put it past the likes of ISIL to infiltrate operatives among these refugees.”

“That is a huge concern of ours,” he added.

While he added that U.S. authorities, who have so far allowed in fewer than 2,000 of Syria’s some 4 million refugees, have a “pretty aggressive” system for screening the backgrounds of those seeking entry into the United States, Mr. Clapper said he’s not so confident about the capabilities of some European nations.

He made the remarks during a wide ranging question-and-answer session that former ambassador and U.S. intelligence chief John Negroponte moderated at Wednesday’s conference sponsored by the Intelligence and National Security Alliance and the Armed Forces Electronics Communication Association.

ISIS militants have already been caught posing as refugees so Clapper’s concern is well founded. But the issue is, of course, much larger than a handful of jihadists crossing into Europe and possibly the United States. Robert Spencer of Jihad Watch wrote in a recent article that with hundreds of thousands seeking asylum in European nations, this has stopped being a “refugee crisis” and instead turned into hijrah, which is essentially migration for the cause of Allah, considered a ‘highly meritorious act’ in Islam. It also happens to be Europe's death knell, he argues.

If you don't believe there is something more to the 'refugee crisis', or, in other words, if you've believed everything the mainstream media has told you thus far, consider these three news items from recent days.

1. According to the UNHCR, 72 percent of Mediterranean sea arrivals are men, while only 13 percent are women, and 15 percent are children. Moreover, 10 nationalities make up the 88 percent of sea arrivals--only 50 percent of which are Syrian. (H/T to WeaselZippers for pointing this out).

Spencer reminds us of the time last February when ISIS threatened to send 500,000 migrants to Europe as a 'psychological weapon.'

Evidence that this is a hijrah, not simply a humanitarian crisis, came last February, but was little noted at the time and almost immediately forgotten. The Islamic State published a document entitled, “Libya: The Strategic Gateway for the Islamic State.” Gateway into Europe, that is: the document exhorted Muslims to go to Libya and cross from there as refugees into Europe. [...]

The Islamic State did not have in mind just a few jihadis crossing from Libya: it also emerged last February that the jihadis planned to flood Europe with as many as 500,000 refugees. Now the number is shooting well beyond that in Germany alone.

3. While the death of 3-year-old Aylan Kurdi is heartbreaking, the story of him being a face of the refugee crisis has totally unraveled.

Here's to hoping the Obama administration takes note and exercises extreme caution in allowing refugees from the war torn country into the U.S.