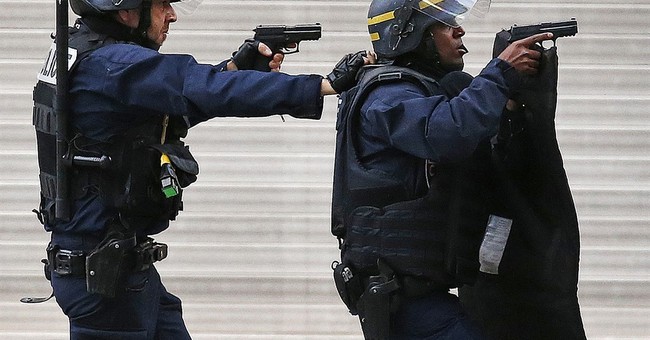 UPDATE: Earlier reports of a major terrorist attack being thwarted in Germany appear to have been a false alarm, thankfully. At least one soccer stadium was evacuated after authorities were reportedly tipped off to an alleged bomb plot. Needless to say, Europe is on edge.


Once it was quickly confirmed that the Paris attacks had been carried out by radical Islamists, the next question on many people's minds was whether any of the terrorists had entered Europe as part of the flood of refugees fleeing the hellish Syrian civil war. Early indications pointed to at least one such case: An ISIS radical posing as a refugee who entered Greece several weeks ago using a fake Syrian passport. The fingerprints on the falsified documents were a match to the suicide bomber, suggesting that EU officials were unable to identify his papers as illegitimate at the point of entry -- a deeply discomfiting thought. Now more evidence is emerging that other jihadis linked to the deadly, coordinated assaults arrived in Europe as "refugees:"

A second suspect directly involved in the Paris massacre is on the loose four days after the attacks, according to French officials, as German police revealed a third suspect in custody apparently posed as a refugee. French officials did not identify the second fugitive. Speaking to The Associated Press, they said an analysis of the series of attacks on Nov. 13 indicated that another person directly involved was unaccounted for. Meantime, police said they arrested an Algerian man linked to the attacks, at a refugee center in western Germany, Reuters reports. Police say he apparently told Syrian refugees at the center that fear and terror would be spread in the French capital. Police are looking into whether he's an accomplice or a confidante of the Paris attackers, Reuters adds. At least two other suspects reportedly entered Europe through Greece posing as refugees.


While it certainly appears that homegrown radicalization is the more urgent threat to the West's security -- thousands of European nationals have traveled to the Middle East to fight and train with ISIS -- it's becoming increasingly clear that the debate over refugees isn't a mere xenophobic distraction, as many on the politically-correct Left have argued.  These are the same tut-tutters who've similarly dismissed concerns over so-called Islamist "no go zones" in Europe as paranoid right-wing fever dreams. Reality, once again, rudely intrudes:


Back Stateside, many elected Republicans -- concerned about Americans' safety and sensing a political opportunity -- have lined up to demand a halt to the relocation of Syrian refugees onto US soil.  A handful of anxious Democrats have joined them.  The Obama White House insists that the influx of refugees will continue unabated, and Hillary Clinton has called on the government to accept tens of thousands of additional refugees.  Most Americans see the United States as a beacon of freedom and compassion.  Our instinct is to help innocent people of all faiths and background escape unimaginable violence and persecution.  But our elected officials' paramount concern must be the security of its citizens.  How can the government adequately vet thousands of (alleged) Syrians (allegedly) seeking refuge within our borders?  There is a process in place, but top US security officials have warned that the system is riddled with shortcomings.  Simple question: How can anyone conduct adequate background checks on people streaming out of a nominal "country" that's descended into smoldering chaos?  Perhaps officials could prioritize women and children, and enforce enhanced protocols for military-aged men?  Maybe Americans would have more confidence in the administration's capacity to adequately screen refugees if they hadn't consistently bungled ISIS-related policy.  President Obama had a major hand in creating the power vacuum in which ISIS metastasized (through his reckless Iraq withdrawal and Syria incoherence), foolishly dismissed the expanding force as a "jayvee squad" that merely posed a regional threat, and just last week wrongly assured Americans that the terrorist army had been "contained."  But by all means, let's trust the federal bureaucracy to vet refugees -- even though knowledgeable officials have admitted the system isn't comprehensive, and White House aides won't talk about the process:

Senior administration officials want you to know there's rigorous screening for Syrian refugees, but they won't talk about it on the record.


Incidentally, the president's approval rating on handling ISIS is (31/54) according to a fresh NYT/CBS poll taken before the Paris attacks and Obama's bloodless press conference, during which he doubled down on his failed "strategy" and directed his angriest remarks at Republicans (who would be well-served to advance a measured, sober-minded case here, while avoiding needless bombast or overreach). Hillary Clinton is going the same hyper-partisan route, personally tweeting this denunciation of the true villains in all of this:

We've seen a lot of hateful rhetoric from the GOP. But the idea that we'd turn away refugees because of religion is a new low. -H


Setting aside the richness of a lecture on "hateful" rhetoric from a woman who recently said that her Republican "enemies" remind her of "terrorist groups," here's another hate-monger who refused to rule out racial and religious profiling to combat terrorism in 2001.  "Whatever it takes:"