Iran: Death to America, We Won, and We'll Do Whatever We Want With Your Billions 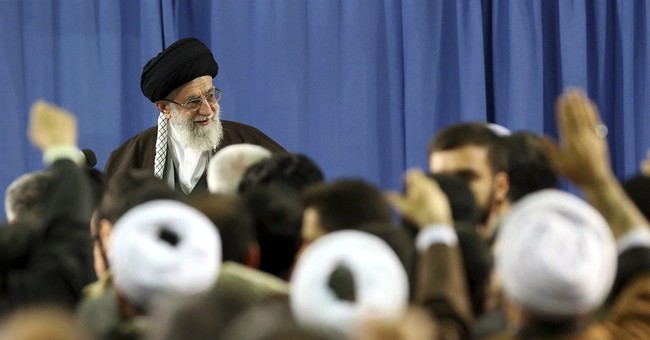 Iran is spiking the football over the slanted nuclear giveaway, as well they should be. Mission accomplished:

"Our objective was keep nuclear program and have sanctions lifted"


And now our hopelessly outmaneuvered Secretary of State is pronouncing himself very troubled indeed over the latest rhetoric from the regime's "Supreme Leader." Surprise:

U.S. Secretary of State John Kerry said a speech by Iranian Supreme Leader Ali Khamenei on Saturday vowing to defy American policies in the region despite a deal with world powers over Tehran's nuclear program was "very disturbing". "I don't know how to interpret it at this point in time, except to take it at face value, that that's his policy," he said in the interview with Saudi-owned Al Arabiya television, parts of which the network quoted on Tuesday. "But I do know that often comments are made publicly and things can evolve that are different. If it is the policy, it's very disturbing, it's very troubling," he added. Ayatollah Khamenei told supporters on Saturday that U.S. policies in the region were "180 degrees" opposed to Iran's, at a speech in a Tehran mosque punctuated by chants of "Death to America" and "Death to Israel". "Even after this deal our policy toward the arrogant U.S. will not change," Khamenei said.


Yes, how could we possibly divine the nuanced meaning of these statements?  It gets better:

According to a translation provided by the Open Source Center, last night, Iranian Deputy Foreign Minister and chief negotiator Abbas Araqchi told Iranian state TV: "[We told them] Therefore, if you want to have an agreement in which sanctions imposed on us for weapons and missiles will continue, then we will not agree. Whenever we consider it necessary for our own security, [or] to help our allies in the region we will provide weapons… We don’t feel shy. We will provide weapons to whomever and whenever we consider appropriate. And we will buy weapons from wherever we can.


Meanwhile, President Obama is busy giving campaign-style speeches attacking critics of the deal as bad faith actors spouting "sound bytes," and claiming that his administration "won't relent" in its pursuit of securing the release of four Americans held hostage in Iran. Of course, he refused to negotiate their freedom as part of his terrible deal because their fate was an "outside issue" -- which didn't stop the Iranians from winning last-minute "outside issue" concessions "thrown in as add-ons."  Because the Iranians get what they want. It's insulting to suggest that opponents of this reckless bargain are superficial blowhards. The liberal leader of the Anti-Defamation League, Abraham Foxman, has come out against the deal, making measured, substantive arguments.  His key point:

I hear the argument that Iran would be a threshold nuclear state without an agreement. But the truth is it would have been an illegitimate one that would have justified continued disapproval, sanctions and the threat of a military option against its nuclear program. That is why the original goal of dismantling Iran’s nuclear infrastructure was not wishful thinking, but a vital part of what needed to be achieved. It was necessary to deny the nuclear legitimacy of a regime that even after reaching an agreement earlier this month still calls for death to America and Israel, fosters terrorism throughout the region and the world, and is expanding its sinister deadly influence throughout the Middle East. Under this deal, either 10 or 15 years down the road, Iran will have a nuclear program legitimized by the international community with the ability to break out quickly to build a bomb. The most dangerous regime in the region should never be given such legitimacy on such a perilous project.


Even if Iran doesn't cheat (for once), they'll still emerge from this agreement as a threshold nuclearized state with Western-gifted legitimacy, an argument Obama himself has basically confirmed. Foxman urges Congress to vote down the deal, then override Obama's inevitable veto. Speaking of which, members of both parties in Congress are incensed with the White House's decision to pre-empt Congress by taking the nuclear accord to the United Nations first:

The Obama administration was forced to play defense on Monday after lawmakers in both parties criticized its decision to let the United Nations — not Congress — have the first say on the Iran nuclear deal. Republicans pounced on the decision following the U.N. Security Council’s 15-0 vote, arguing the White House was giving short shrift to congressional assent in a rush to build international support for the agreement. The White House appeared to hope that the U.N. vote would build pressure on Congress to back the deal, but the strategy risked backfiring, with some Democrats scolding the administration for the decision...Senate Foreign Relations Committee Chairman Bob Corker (R-Tenn.) — who last week sent a letter along with the committee’s top Democrat, Sen. Ben Cardin (Md.), asking President Obama to postpone the U.N. vote — also criticized Monday’s action. “It is inappropriate to commit the United States to meet certain international obligations without even knowing if Congress and the American people approve or disapprove of the Iran agreement,” he said. “During the review period, members on both sides of the aisle will evaluate the agreement carefully, press the administration for answers and then vote their conscience.” House Minority Whip Steny Hoyer (Md.), the second-ranking House Democrat, also has said that the United Nations vote should have been delayed.


The administration is counting on enough Democrats to put partisanship first to preserve Obama's myopic legacy gambit -- which is probably a safe bet.  Still, Team Smart Power is alienating enough Democrats as to make things rather dicey. The disapproval vote against this mess will be strong and bipartisan. Marco Rubio's positioning is on the mark: