Pittsburgh Penguins: We're Not Going to Skip the White House 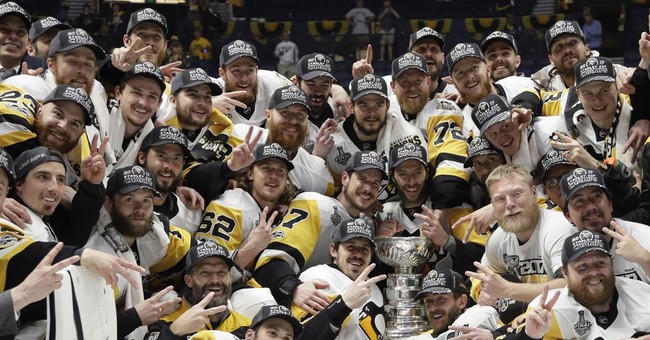 The Pittsburgh Penguins won their second Stanley Cup in two years on Sunday, and the team would like to make it clear that they would definitely visit the White House if they are invited. In a statement released by the Penguins' CEO/president David Morehouse, Moorehouse said that the organization would visit the White House "as a team" and that the Penguins "respect the office of the presidency of the United States." Morehouse is a frequent donor to Democrat candidates and used to work for Bill Clinton.

“The Pittsburgh Penguins would never turn down a visit to the White House and, if invited, we would go as a team,” team CEO/president David Morehouse said Tuesday in a prepared statement.
[...]
“We respect the office of the presidency of the United States and what it stands for,” he said. “Any opposition or disagreement with a president’s policies, or agenda, can be expressed in other ways.”

The statement was likely in response to reports that the NBA champions, the Golden State Warriors, had "unanimously decided" to skip the White House congratulatory visit. The team eventually clarified that this was not true, and that they had not even been invited to visit the White House. Several members of the New England Patriots' organization did not visit the White House, for both political and apolitical reasons.

Last year, when the Penguins met with President Obama to celebrate their championship, Obama dropped one of the smoothest burns of his presidency, poking fun at Penguins' star Phil Kessel.

Good on the Penguins. A White House visit is just that--a White House visit. Granted, a player should be free to not visit if he doesn't want to (as Tim Thomas skipped out in 2012 when the Boston Bruins won the Stanley Cup), but it's a sad state of affairs that a team feels as though it's necessary to clarify that they respect the presidency.

The Penguins' visit to the White House would likely happen in the fall.