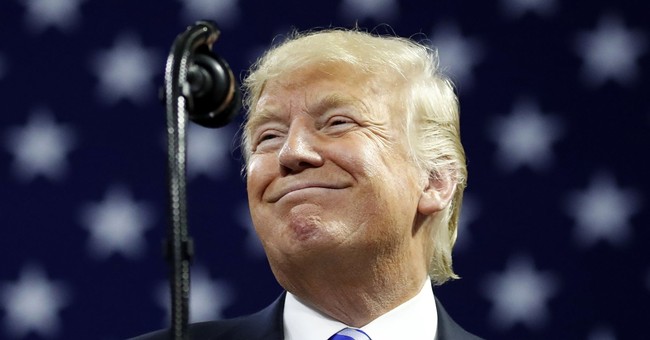 In some ways, this top line data point is truly extraordinary.  In other ways, it's what we've come to expect.  Last Tuesday, in the span of roughly one hour, President Trump's former campaign chairman was convicted on eight federal counts, and his ex-lawyer and longtime confidant entered guilty pleas on eight charges.  In the ensuing days, two other Trump-connected figures -- the chief executive of the National Enquirer's parent company and the Trump Organization's CFO -- reportedly accepted immunity deals from the feds.  Even though Trump himself may still remain above the fray for now, it was an objectively disastrous week for his inner circle, potentially portending darkness ahead for his presidency.  And yet:

Most of the original survey was in the field prior to Tuesday's avalanche of news, so NBC and the Journal's pollsters ran a separate poll conducted entirely after the negative details exploded onto front pages and newscasts from coast to coast.  The outcome?  Virtually indistinguishable from the initial sample.  In case you're curious, July's NBC/WSJ poll pegged the president's approval rating at...(45/52). "Remarkably stable," marvels one of the pollsters.  You can say that again:

Amazing stability in Trump’s job approval: For the past two months in RCP, it’s never dropped below 43 nor reached 44 https://t.co/75BiU3QRgo

That's a stunning degree of consistency in this aggregated average, especially in an era of such dramatic and fraught news cycles.  The lesson, which political commentators need to learn over and over again, is that most Americans seem to have formed solid opinions about Donald Trump -- and those opinions clearly are not easily uprooted, no matter how much noise and chatter might suggest spikes or swoons in public opinion "should" soon arrive.  People are dug in.  As for the rest of the poll, here are some of the key takeaways:

Other notes from the NBC/WSJ poll: Dems are +8 on generic ballot & enjoy a double-digit intensity advantage. GOP is +14 on the economy, also leading on taxes, guns, & illegal immigration. Dems up big on healthcare. Kavanaugh is +4, with a plurality (37%) undecided/unsure. pic.twitter.com/bQDUcmpI1Y

As for the Manafort/Cohen revelations, 40 percent of voters say their wrongdoing could ensnare Trump; 27 percent say it's limited to those two individuals, and early one-third say they don't know enough to say either way.  Count me among the latter group.  As for the midterms, the poll finds Nancy Pelosi is a drag on her party, and that Americans are roughly evenly split between those who worry that a GOP Congress won't provide a check on Trump, versus those who believe a Democratic Congress would be too obstructionist. But along with the Dems' eight-point generic ballot lead, these are the findings that are most likely to keep Republican strategists and candidates awake at night:

On those two enthusaism and intensity metrics, Democrats lead by 11 and 18 points, respectively. A complacent conservative electorate, including many who simply refuse to believe bad polls, could be a key ingredient to a blue wave.  The president's numbers aren't bad enough to guarantee a big night for Democrats. But if left-leaning and anti-Trump voters continue to swamp underwhelming Republican turnout, things could get ugly.  It's Republicans' task to fire up their voters this fall (the Supreme Court fight in September and October will help) and capitalize on their economic edge to stay competitive.