The Home Stretch: Five Big Numbers to Know From The Week in Politics -- August 24, 2018 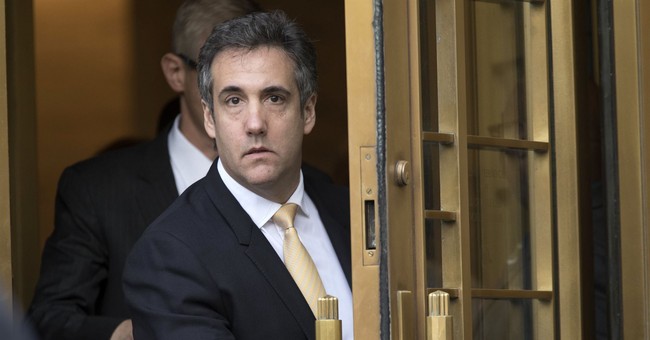 [$420,000] - According to court documents, longtime Trump lawyer and fixer Michael Cohen invoiced the Trump organization for that dollar amount last year, seeking reimbursement for "services rendered."  He got paid.  It's now alleged -- by Cohen and the feds -- that Trump approved this scheme, under which two women's silence was effectively purchased via a direct payoff and a "catch and kill" maneuver executed in coordination with Trump's allies at the National Enquirer tabloid.  Cohen facilitated both exchanges.  Now Trump's ex-attorney has pleaded guilty to eight charges, including campaign finance violations in which he's directly implicated the president.  The chief executive of the Enquirer's parent company has reportedly accepted an immunity deal, and is prepared to attest that Trump knew about the arrangement, something Team Trump has denied at various stages of this controversy.  Also granted immunity is the CFO of Trump's own firm, another significant development.  As such, an emerging, burning political question is whether all of this information, if confirmed, amounts to impeachable offenses by Trump.  Here's a useful summary of the legal issues currently in the mix.

Former federal prosecutor Andrew McCarthy told us last night on Benson and Harf that (a) he doesn't agree with those who claim the feds induced Cohen to plead to actions that aren't even crimes in order to jam up Trump (McCarthy personally worked alongside the prosecutor in the case, endorsed his professionalism and character, and insisted he wouldn't play games), (b) Trump's lack of legal knowledge and long history of NDAs and hush money could make proving criminal intent quite difficult, and (c) even if intent is established, he doesn't view the alleged campaign finance infractions as "high crimes and misdemeanors," the constitutional standard for impeachment:

Senior Fellow At National Review Institute @AndrewCMcCarthy On Cohen's Campaign Finance Charges; There Is No Way Somebody Pleads Guilty To Something That Isn't A Crime | @BensonAndHarf https://t.co/mxFqGqNiKm

For his part, Trump says "flipping" on associates should be illegal, which would basically handcuff government lawyers attempting to prosecute drug cartels, organized crime syndicates and terrorist rings -- a highly unusual stance for 2016's self-professed "law and order" candidate to espouse.  As usual, Trump's ethics are situational and his arguments are plainly myopic and self-serving.  Still, we remain a good distance away from serious impeachment talk, and we may never get there. Democrats are split on whether to openly discuss that prospect at this time, or to wait until after the midterms; but almost none of them are pretending it'll never be on the table at all. Overall, it was a bad week for the president, prompting him to take yet another frustrated shot at his Attorney General, eliciting a fairly stern retort.  Dramatic times.

[Eleven] - If just one more woman had been convinced at trial, Paul Manafort's Alexandria, Virginia jury would have convicted him on all 18 federal counts this week, according to multiple reports.  Despite the lone holdout, Manafort was found guilty on eight charges and faces significant prison time -- not to mention another federal trial in Washington, DC, slated to start soon.  One of the jurors spoke to Fox News host Shannon Bream this week, explaining how she felt compelled to convict based on the evidence, in spite of her MAGA hat-wearing support for President Trump.  She said didn't want Manafort to be guilty at the onset, but ultimately concluded it was her duty to vote to convict.  This is precisely how our jury system is supposed to work. Good for her:

Paul Manafort juror Paula Duncan: "I did not want Paul Manafort to be guilty, but he was and no one's above the law." @foxnewsnight https://t.co/IPeZ46t5Nj pic.twitter.com/0KPOlQ0e1Z

As I wrote on Wednesday, the Manafort developments mean one of three things.  Option one: He's got nothing of substance on Trump, so he'll simply go to prison for his (pre-Trump campaign) crimes.  Option two: He'll get pardoned by Trump, igniting a debate over whether the president did so because he genuinely felt Manafort was treated unfairly, or because he wanted to reward his former campaign chairman's silence. Option three: Staring down the barrel of an effective life sentence, Manafort decides to sing to a leverage-flush Robert Mueller.  Very few people in the world have any clear sense of which outcome is most likely, so cue the rampant speculation.

[23] - That's the average percentage point margin by which voters in North Dakota, West Virginia and Indiana want to see Brett Kavanaugh confirmed to the Supreme Court, according to a newly-released survey set.  These numbers broadly reflect previous polls from those three states, each of which is represented by a vulnerable Democrat who voted to approve Justice Gorsuch last year.  National polling shows the general public split on the nomination -- a Q-poll has Kavanaugh above water, a Fox News poll has him almost exactly tied -- but in key pressure-point states, incumbent Democrats' constituents break heavily toward favoring confirmation. Desperate Democrats are trying to bootstrap the news developments mentioned in my first two items into an excuse to delay or sidetrack the Kavanaugh process.  On Fox last night, I called it a transparently partisan ploy:

.@guypbenson on Dems trying to delay Kavanaugh hearing: "The fact of the matter is, [@POTUS] was duly elected, he's a legitimate president. It is his constitutional role and prerogative to fill Supreme Court vacancies." #TheStory https://t.co/S77HXQTJe1 pic.twitter.com/QBp0DOSxbl

If you're tempted to believe this is a good-faith line of argument from Schumer, look no further than this flashback reminder that the minority leader also urged postponing the Gorsuch nomination over...the Russia probe.  The Judiciary Committee Chairman has rightly rejected this unserious "demand" -- with the Majority Leader McConnell not only confidently predicting Kavanaugh's on-schedule confirmation, but also forcing the Senate to stay in session for another August week to move on a slew of other Trump nominees.  On this front, McConnell has been playing laser-focused hardball since Trump was inaugurated.

[Four-to-Seven] - The body of University of Iowa student Mollie Tibbetts was discovered a few days ago after weeks of futile searching.  She was allegedly murdered by an illegal immigrant back in July.  Federal authorities say Cristhian Rivera has been living in the United States unlawfully for between four and seven years; Rivera's lawyer has attempted to claim that his client is a legal immigrant, but both DHS and Rivera's one-time employer say otherwise.  Politicians have jumped into the fray on this tragic case, with many immigration restrictionists saying that it illustrates the need for more border control and enforcement.  Some figures on the Left have sought to downplay the story: Sen. Elizabeth Warren almost immediately pivoted to talking about family separations at the border (Tibbetts, a US citizen, was permanently separated from her family), a CNN contributor asserted that Tibbett's' death has everything to do with "toxic masculinity," and nothing to do with illegal immigration, and an MSNBC guest dismissed the story as a Fox News obsession over "some girl in Iowa."  After mass shootings, liberals often proclaim that the horrible events justify an immediate and emotional debate over gun control, while conservatives urge perspective and caution against politicizing people's deaths.  This week, those roles were largely reversed.

I grant lefties' points that evil comes in all shapes and sizes, that many statistics show immigrants are less likely to commit crimes than native-born Americans (certain data points cut in the opposite direction), and that it's unfair to blame an entire group of people for the actions of outlier monsters.  I wish they'd apply those same lessons and appeals to dispassionate data to the gun control debate.  Also, it's entirely possible to decline to smear all illegal immigrants as violent criminals while also being righteously furious that once again, an innocent American citizen has been slaughtered by someone who should never have been in our country.  We've seen numerous stories about illegal entrants, some of whom have been deported numerous times, committing brutal crimes within our borders.  That's not acceptable, full stop.  Partisans who deflect, make excuses, or lash out at the many Americans who are irate over Tibbett's' killing are contributing to the reason Trump won.

[Five-and-a-half] - Senator John McCain spent more than five years of his life in captivity, held by America's enemies after being shot down during the Vietnam War.  He was brutalized and tortured.  He also worked to keep his fellow POWs' spirits up while behind bars, even refusing an offer of early release due to his family's high profile.  Despite some ugly, false smears to the contrary, McCain is a bona fide hero and a patriot. I haven't always agreed with Arizona's senior Senator; I supported McCain for president in 2008, then criticized him aggressively as recently as last year.  But I've always respected his service to this country.  Earlier today, McCain's family released a sad statement regarding is ailing health:

I love my husband with all of my heart. God bless everyone who has cared for my husband along this journey. pic.twitter.com/v27sEbboii

The end, it appears, is near.  The thoughts and prayers of our nation go out to the McCains.

[Friday Fun] - If you're a fan of these hilarious montages of Al Sharpton's Teleprompter misadventures on MSNBC, this week's addition to the list became an instant classic: