Analysis: Clouds Darken Over Trump, But Does the Current Evidence Justify Impeachment? 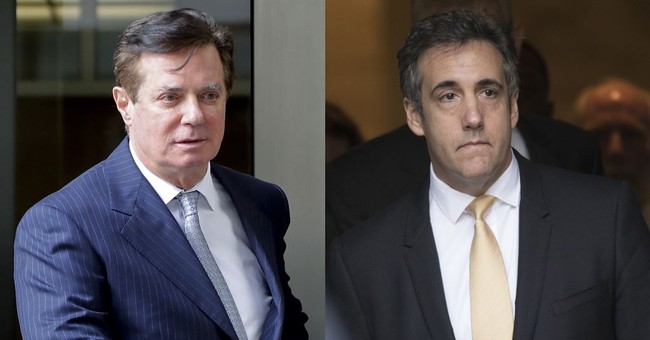 In a dramatic one-two punch Tuesday afternoon, a jury convicted former Trump campaign chairman Paul Manafort on eight of 18 federal charges (mostly related to tax evasion and bank fraud) -- and nearly simultaneously, President Trump's longtime fixer and lawyer pleaded guilty to eight federal counts (including tax evasion and campaign finance violations).  In tweets this morning, the president expressed sympathy for Manafort, again calling Robert Mueller's special counsel probe a "witch hunt," and perhaps hinting at a pardon.  He also attacked Cohen as a bad attorney, accusing him of 'making up stories.'  These developments are bad for Trump, but we don't yet know how bad.  Some thoughts:

(1) As a candidate, Trump boasted about surrounding himself with the "best people."  Neither Manafort nor Cohen ever came close to fitting that bill (nor, incidentally, did this woman); Trump's habitual consorting with shady, sleazy people is now coming back to haunt him.  The dubious cast of characters who now threaten to damage or bring down his presidency were welcomed into Trump's inner sanctum by Trump himself.  That's on him.

(2) Mueller now has all the leverage he'll ever need against Manafort, who is nearly 70 years old and is staring at the strong possibility of dying in prison, especially with yet another trial pending.  If Manafort has something damning on Trump, his incentive to spill to the special counsel just got a lot stronger.  If.  Otherwise, the crimes for which Manafort has been convicted, and is still awaiting trial, pre-date the Trump campaign.  I continue to doubt that Trump colluded with the Russians to impact the 2016 election, with these newly-reported details buttressing my opinion -- but if there were ever a moment for Manafort to produce a smoking gun, this would be it.  As I referenced earlier, it is also possible that Manafort may be holding out for a presidential pardon or commutation.  If Mueller's final report comes up empty on collusion, Trump would likely view Manafort's ordeal as brought on by a probe into a totally unrelated matter, and could very choose to vitiate his former top aide's prison sentence.  All in all, though, law professor Jonathan Turley's assessment on Special Report last evening is undoubtedly correct: Mueller strengthened his hand yesterday.  Former federal prosecutor Andrew McCarthy agrees, calling the developments "a win" for the special counsel's team. Denying that is happy talk.

This comes in addition to Cohen's claim several weeks ago that candidate Trump was aware of the infamous Trump Tower meeting with a Russian emissary in the summer of 2016 -- and the major allegations keep on rolling in: Cohen's Clintonite lawyer Lanny Davis is now suggesting that Cohen has information that Trump did, in fact, collude with the Russians:

Color me skeptical.  It's true that Cohen has been Trump's trusted (oops!) henchman for years, so he likely has knowledge of all sorts of grubby and sordid dealings.  But he's also an established liar who's in desperate self-preservation mode.  Rather than immediately dismissing or accepting his new contentions, we should wait to see what, if any, evidence he might be able to produce that backs up his claims -- which directly contradict his own previous assertions.  We know that Cohen was fond of making lots of secret recordings.  Might some proof be lurking in those, or in yet-unseen records of some sort?  We know there are some documents relating to the payments, but we don't know if they prove criminal intent (a point I'll expand on below).  For what it's worth, I'm inclined to believe that Trump ordered the payments to effectively buy the silence of those adult entertainers; it makes sense that he'd have been eager to keep past infidelities out of the headlines in advance of the presidential election.  I also wonder if a prenuptial agreement may also have factored in.  I'm more cynical about Cohen's Russia-related revelations, which seem a little too convenient.  Again, I'm open to evidence -- and, indeed, compelling evidence is required from a non-credible man with no scruples who's trying to save his own skin by advancing dramatic claims.

(4) Let's say that it becomes verifiable, beyond the mere word of Michael Cohen, that Trump conspired to evade and violate campaign finance laws.  Then what?  It's fairly well established, if still disputed, that a sitting president cannot be indicted, even though he or she could be prosecuted for crimes upon leaving office.  But the House of Representatives has the power to impeach a president for "high crimes and misdemeanors," which is effectively a political term of art.  The House gets to define it as it sees fit.  Would acts that breach federal campaign finance rise to the level of impeachable offenses?  That may well depend on which party controls the House.  At this stage, I'd be surprised to see lower chamber Republicans move on impeachment, based on the current set of circumstances -- yes, even if a clear campaign finance crime is established.  Why?  McCarthy lays out the rationale that I suspect would prevail among many GOP members:

"The conduct here is not of the egregious nature that rises to high crimes and misdemeanors — it is an infraction committed by many political candidates and often not even prosecuted. More to the point, it is remote from the core responsibilities of the presidency, implicating pre-election actions to conceal alleged indiscretions that occurred a decade earlier."

A Democratic majority, by contrast, would be much more apt to move forward with impeachment against a president of the opposite party; dozens of House Democrats were already demanding impeachment long before any of this week's events occurred.  Are more Democrats willing to stake out that political territory now, or would they prefer to remain noncommittal in order to avoid energizing Trump's base ahead of the election?  Relatedly, those on the Left and in the press who are bemoaning the GOP's partisan defenses of Trump here are being reminded of Senate Democrats' refusal to remove President Clinton from office over clearly-established crimes in the late 1990's:

In 1999, William Jefferson Clinton was acquitted by the full Senate, with every Democrat voting for acquittal, for undeniably lying under oath and obstructing justice. Save the mote-and-beam tosses for somewhere that raw partisanship doesn't apply. https://t.co/tFp2od7UDi

Of course that doesn't excuse inaction, but let's not pretend like Dems would be rushing to impeach a President from their own Party. Impeachments are political proceedings w/ political consequences. Incentives must be huge for politicians in POTUS' own party to take that path.

As an critic of reflexive tribalism, I'm not quite sure where I'd stand on the question of how to handle proven (but as of now, merely alleged) campaign finance violations by the President of the United States.  Presidents must not be above the law, but I'm not necessarily convinced that setting up unlawful non-disclosure arrangements in order to keep years-old sexual improprieties under wraps is a serious enough infraction to merit deposing a duly-elected chief executive.  Democrats used to argue that low crimes related to covering up sex wasn't a big deal.  Republicans used to argue the opposite.  Somewhat paradoxically, I'd be more willing to treat Russian collusion as impeachable (even if it's not technically a crime).  Conspiring with a hostile foreign power in an effort to influence a national election, then lying endlessly about it, would constitute a "high crime" in my book.  Let's see what Mueller finds.

(5) People attempting to diminish the seriousness of these allegations by pointing to an incident involving the Obama campaign are relying on a shaky comparison:

There’s a reason that deliberate and knowing violations of campaign finance law are a criminal matter, punishable by arrest and imprisonment, while good-faith paperwork errors are handled civilly, with fines.

Recall that conservative author Dinesh D'Souza was convicted for deliberate campaign finance crimes.  More relevant, perhaps, is the point that former Democratic presidential candidate John Edwards was prosecuted for a hush money scheme involving a mistress (but was acquitted by jurors).  I wonder if the better question is whether it can be proven that then-candidate Trump intended to break the law in this scheme.  Did he know he was circumventing election laws, or did he simply believe he was trying to keep his fingerprints off of direct payments to these women for political or personal reasons?  This is...not a great answer, but I think it goes to Ben Shapiro's point that even though it reflects quite poorly on his character, the best defense for Trump may be, "I didn't see this as a campaign expense because I've been paying women (and others) off in exchange for their silence for my whole adult life:"

Trump's best defense here is actually pretty credible: he's got a long history of finding ways to pay women to shut up, so this wasn't a campaign expenditure. I'm baffled why that isn't the first line of defense. See, e.g., this: https://t.co/BBuLhrrPsc

One counterpoint is that the timeline strongly suggests that the Stormy Daniels payment was tied into campaign optics.  But that still doesn't necessarily prove intent.  And remember, lack of criminal intent was the (flawed) rationale for letting Hillary Clinton off the hook for her incontrovertibly illegal actions related to her email scandal.  Similarly, could potential lack of proven intent be a mitigating or quasi-exculpatory factor here?  Even as someone who would still need to see more evidence, and quite possibly more crimes, to endorse Trump's impeachment at this time, this is obviously correct:

There is no universe that exists under which all the MAGA-folks wouldn’t be calling for Hillary’s impeachment or resignation under similar facts. So take that into account when you read their defenses.

In summary, Trump is in worse shape today than he was on Monday, and Robert Mueller is further empowered. Trump finds himself besieged by the consequences of his own unethical conduct and the actions of members of his hand-picked, ethically-impaired coterie.  If Paul Manafort doesn't "flip" at this point, it's probably because he doesn't have the goods.  The latest cocktail of claims from Michael Cohen, meanwhile, may end up being more dangerous for Trump -- but only if Cohen can present meaningful proof beyond his unreliable say-so.  The last 48 hours demonstrate that Trump us on shakier ground than ever, with former allies going down and cutting deals.  But whether any of that will lead to his expulsion from the Oval Office is still the subject of speculation and wish-casting on both sides.  The evidence has gotten worse for the president, with potential subpoenas and depositions quite possibly on the way -- but it does not (yet) build a credible case for impeachment, in my view.