GOP Victory in OH-12: A Win is a Win, Despite Reasons for Concern 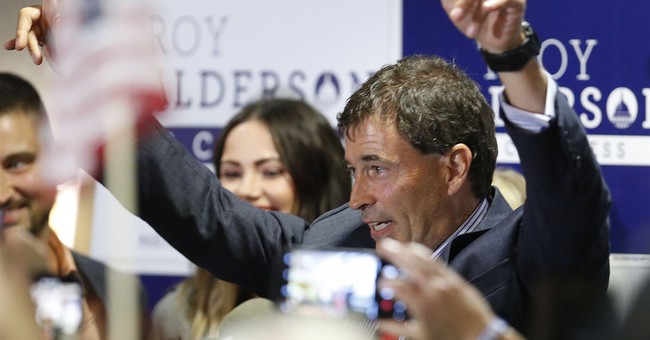 Voters in Ohio's 12th Congressional District appear to have narrowly elected Republican Troy Balderson in yesterday's special election, thwarting Democrats' hopes to flip another GOP-held seat ahead of the midterm elections.  The race came down to the wire, but the incumbent party ultimately prevailed.  There's a small chance that provisional ballots could trigger a recount, and that absentee ballots could shift votes, but left-leaning elections guru Dave Wasserman looks at the math and effectively calls the contest over, discerning that defeated Democrat Danny O'Connor would "need a miracle" to reverse the outcome.  For all intents and purposes, and barring major developments, it's over; Balderson won.  Winning is always better than losing (with very rare arguable exceptions), so the GOP has ample reason to celebrate -- but the broader picture is less rosy than they'd have you believe.  A few key takeaways, starting with the good news for Republicans:

(1) A win is a win.  I realize that's some deep and profound political analysis, but that's why they pay me the big bucks.  Seriously, though, a loss would have been so much worse than a too-close-for-comfort victory.  Sure, the House GOP conference would be down a seat, but the bigger problem would be psychological.  Notching a second consecutive special election win in a fairly heavy (+11) Trump district would have been yet another shot in the arm to national Democrats.  It would also have been a morale crusher for Republicans, whose fretting, demoralization and panic over a blue wave could at least partially spiral into a self-fulfilling prophesy.  It could also have weighed on the minds of major conservative donors, who might be more inclined to close up their wallets in a hopeless-looking cycle.  Narratives and optics matter, and Republicans seem to have averted a nightmare on both fronts by hanging on to this R+7 seat.

(2) The Trump-Kasich alliance worked.  Suffice it to say that the President of the United States and the Governor of Ohio, both Republicans, do not care for one another.  But they each strongly endorsed Balderson in this campaign, combining their efforts -- albeit indirectly -- to pull their preferred candidate over the top.  Trump juiced and energized the base, going all-in for Balderson with a rally and tweets last weekend, while Kasich helped close the sale with Trump-skeptical educated suburban voters.  I'd submit that without the assistance from both Trump and Kasich, Balderson loses.  But disparate elements of the party came together and salvaged the seat.

(3) Republicans have now gone eight for nine in special House elections during the Trump era. For all the talk of a 'blue wave' (see more context below), this statistic is accurate -- and the president made sure to highlight it on Twitter:

The Republicans have now won 8 out of 9 House Seats, yet if you listen to the Fake News Media you would think we are being clobbered. Why can’t they play it straight, so unfair to the Republican Party and in particular, your favorite President!

(4) Nancy Pelosi is still a drag on Democrats.  More than a few political pros are assessing that this MSNBC exchange (which we wrote about at the time) proved to be a decisive moment in the home stretch of the race:

Lotta what-ifs in a race this close, but I wonder how this one shakes out if Chris Matthews doesn’t wrestle O’Connor off his talking points on supporting Pelosi... https://t.co/B9OTAXZBHi

O'Connor finally admitted under pressure that he'd back Speaker Pelosi if push came to shove, and Republicans took that answer and sprinted with it toward the finish line.  The NRCC cited it as a turning point in the campaign in their post-victory talking points, emphasizing that it also presents a national lesson, too:

Via an NRCC email blast to the press, here's the official GOP line on their narrow #OH12 victory last night, fyi: pic.twitter.com/xHVSsVu1na

And now, the...less good news for the GOP:

(1) This seat shouldn't be competitive. RealClearPolitics elections expert Sean Trende is likely right about this, tweeted before anyone had declared victory last night:

I know people don't want to hear this, but at this point it doesn't really matter. OH-12 shouldn't be a nailbiter for the GOP, even with two solid candidates running.

In case you missed it, here's his detailed, pre-election explanation of why a tight win in either direction would be a worrisome sign for the Republican Party.  As I mentioned above, this is an R+7 district that Donald Trump carried easily.  It's been in the R column for the last 36 years.  The previous incumbent won with nearly 67 percent of the vote.  Yet last night was nail-biter.

(2) Democrats gained considerable ground.  In spite of the GOP's not-quite-official win, last night's vote tally represents the latest data point in a long string of 2017 and 2018 elections in which Democrats' share of the vote total has increased by double digits over 2014 and 2016.   As I alluded to in the bullet point above, the Republicans' margin of victory in OH-12 in 2016 was 37 points.  On Tuesday, it was a hair under one point.  That is not a happy trajectory for the party, as it points to strong Democratic candidate recruitment, robust Democratic enthusiasm, disillusionment among a segment of traditional Republican voters, and a hostile national climate.  If this district had been even fractionally less red, it could now be in Democratic hands.

I'll leave you with one more glimmer of decent news for Republicans, even as worrisome signs cropped up in Washington state and Kansas last night: