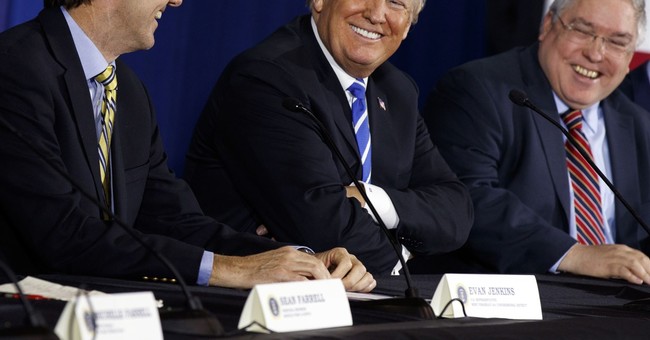 One of the most anticipated primary battles of the 2018 cycle is coming to a head tonight in West Virginia, where Republican voters will choose their US Senate candidate to challenge vulnerable Democratic incumbent Joe Manchin.  The intense GOP fight features three potential nominees: Congressman Evan Jenkins (a former Democrat), State Attorney General Patrick Morrissey (who's been accused of being a northern carpetbagger), and businessman Don Blankenship (who was recently released from prison).  During a televised primary debate that aired on Fox News last week, the two politicians sniped relentlessly at one another, while Blankenship scored with the audience by avoiding those squabbles and delivering dry one-liners.  But Democrats are licking their chops over the prospect of facing Blankenship (for whom they're actually spending money to boost), who was convicted of a crime related to a deadly mine accident, and whose embrace of "political incorrectness" has descended to new depths of self-parody.  This is real:

What in the world did I just watch pic.twitter.com/4eudpGAxp0

Republicans who are still reeling from somehow losing an Alabama Senate seat by nominating a toxic candidate (who has his eye on a new prize, incidentally) are anxiously eyeing Blankenship as another baggage-laden gift to the opposition.  Donald Trump, Jr. waded into the race last week to anti-endorse Blankenship:

Manchin remains relatively popular in a state that has turned exceptionally hostile to the national Democratic Party.  Trump carried West Virginia by more than 40 points in 2016, and the governor switched parties a number of months back, recognizing and adapting to the huge shift within his electorate.  But an April poll showed Manchin still commanding a 35 percent approval among Republican voters; for him to be ousted, many more GOP partisans will need to "come home" and vote against him.  The concern among party leaders, from the Senate to the White House, is that drawing Blankenship would allow Manchin to cruise to a relatively easy win, when he should be fighting for his political life:

For what it's worth, Jenkins has been touting his vocal early support for Donald Trump's presidential campaign, while Morrissey has highlighted his long record of fighting the Obama administration in court (which has earned him praise and endorsements from conservatives ranging from Ted Cruz to Rand Paul to the editors of National Review).  So what can we expect tonight?  Your guess is as good as mine -- and as good as any of the professionals looking at internal polling, it seems.  Wow:

Buckle up. Tomorrow’s going to be a wild primary night.

We'll see if Trump's eleventh-hour push helps tip the balance away from Blankenship, who some observers believe has built momentum down the home stretch of the contest.  It appears as though his opponents are similarly nervous.  If he goes down, the president and "Cocaine Mitch" might share a high five.  If not, I'd bet there will be a lot of smiling faces inside Team Manchin and at DSCC headquarters.  Stay tuned...