Anatomy of a Stunner: How Roy Moore Lost an Unlosable Race in Alabama 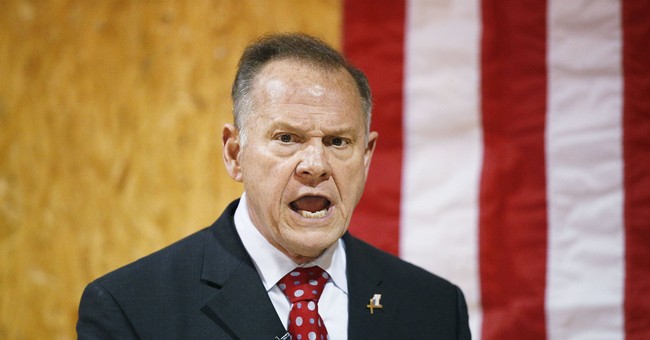 In a shocking political earthquake, the Republican Party has lost a Senate election in Alabama.  For perspective on how difficult that feat was, the closest previous Senate contest in that state over the last two decades was a...19-point GOP victory.  Just three years ago, Jeff Sessions ran unopposed.  Donald Trump carried 'Bama by 28 points last fall.  In my election preview post yesterday, I wrote that an upset by liberal Doug Jones was improbably plausible, due exclusively to the disastrously awful candidate Republicans had nominated.  Apologies for quoting myself, but here you go:

As far as predictions go, Doug Jones would need a perfect storm to pull this off: High black turnout, women turning sharply against Moore, and a sizable contingent of disgusted Republicans crossing over, writing in someone else's name, or just staying home...So while some data suggests a Jones victory as a viable outcome, I'll believe it when I see it.  Alabama is about as red and as Trumpy as it gets.  Moore mostly weathered the storm that coincided with the peak of the sexual allegations, and still has to be considered the favorite...we shouldn't overlook how extraordinary it is that we're even discussing the possibility of a Democrat capturing Jeff Sessions' old Senate seat.  Trump carried the state by nearly 30 points last year, and he maintains a healthy job approval rating there (53/44, according to Monmouth).  If the GOP were running Trump-endorsed and scandal-free Luther Strange, or virtually anyone else, this contest would be a blowout yawner.  But Alabama Republicans saw fit to nominate Roy Moore, tossing a remarkable lifeline to Democrats.

I thought the ingredients for a massive upset were all in the mix -- but I'd believe it when I saw it.  And now we've seen it.  Based on exit polls, African-American voters comprised roughly the same percentage of the Alabama electorate than they did in 2012, when Barack Obama was on the ballot. Blacks voted overwhelmingly (96/4) for Doug Jones.  That turnout data point mattered.  Moore won white college-educated women in Alabama last night, but only by 11 points.  By contrast, Mitt Romney carried that cohort by 55 points against Obama.  Romney won Alabama female voters overall by double digits (56/44); Moore lost them by 17 points. Those data points mattered.  (I've made several comparisons to 2012 here because that was the last statewide general election in which public exit polling was conducted).  Oh, and there's this.  Ahem:

Here are the adjusted exits. Moore lost women without kids by 11 points. He lost mothers by 34. You know why. https://t.co/s53zz6S0AX pic.twitter.com/xKJFeJFc0M

But the number one reason Doug Jones will be a US Senator -- hands down -- is that many traditional Republican voters either wrote in a candidate, crossed over for Jones, or (and this was the big one) sat at home.  As of midnight, with 100 percent of precincts reporting, Jones' victory margin was a hair under 21,000 votes (that number may fluctuate as tallies are finalized).  Nearly 23,000 Alabamians followed the lead of GOP Senator Richard Shelby and wrote in someone other than the two parties' nominees.  Beyond that, Republican turnout was way down: Jones came close to matching Hillary Clinton's vote total in the state, whereas Moore managed just about half of the Trump vote.  Throughout the night, election gurus kept noticing that Jones was outperforming his targets in heavily Democratic areas, while Moore was underperforming significantly in major GOP strongholds.  In short, many thousands of people who almost always vote Republican in the state of Alabama simply refused to do so for Roy Moore.  This telling tweet arrived almost exactly one hour before the race was called for Jones:

Folks, our model thinks that the GOP may have a big turnout problem.
The three, white, GOP counties have fallen far short of our turnout estimates--including two under 75% of our estimates.
That's what the big swing in our estimate is about.

Moore underperformed Romney by nearly 20 points among moderate Republicans -- and that's among those who actually bothered to show up.  How could Moore lose a seemingly unlosable race in the reddest of states?  By being so noxious and extreme on issues that many Republicans couldn't stomach him, and by being a credibly accused child molester and creep.  A majority of Alabamians (51/44) believed the sexual allegations against him were definitely or likely true -- including strong majorities of independents and women, who turned heavily against Roy Moore.  Plenty of Republicans who felt the same way didn't bother voting.  That's how you lose an Alabama Senate seat as a Republican, a nigh impossible task.  This surreal implosion had many political parents who helped cooked up this poisonous brew.  This tweetstorm by a New York Times reporter is well worth a read for a pretty complete and damning picture about how many people within the GOP helped author this defeat.

But perhaps no one should take a bigger bow than former White House aide Steve Bannon, whose loud and bitter boosterism led to the nomination and survival (until last night) of basically the only Republican in the state of Alabama who could possibly have lost this race.  Democrats must be on their knees praying that Republican voters will nominate even more of Bannon's unpalatable candidates next year.  Bannon claims to be fighting for the Trump agenda, but he endorsed the guy Trump (smartly) opposed in the primary, which ended up costing the party a precious Senate seat -- which could imperil other big ticket Trump agenda items, including tax reform, on which the party now has close to zero breathing room.  By the way, I've seen a lot of Trump critics blaming the president for Moore's loss, but that's unfair.  His last-minute appeals on Moore's behalf likely spared Moore the further humiliation of a blowout loss, with late deciders breaking Moore's way.  Trump certainly had something to do with that.  I'll leave you with a note on abortion, which was the primary reason I couldn't have brought myself to cross over and vote for Jones if I'd been an Alabama voter.  He's a far-left radical on the issue, and exit polls show that the vast majority of the state that elected him rejects his extremism:

So, question: Does Doug Jones vote like a guy who wants to have a prayer at re-election (assuming Republicans don't re-nominate Roy Moore in a few years), or will he faithfully back Chuck Schumer like the true blue liberal that he is?  My strong guess is the latter, but we'll see.  Parting thought: In 2010, Republicans won a historic landslide against an unpopular president.  An early indicator of that deluge was a Republican shocking everyone and winning Ted Kennedy's old Senate seat in Massachusetts.  Well, a Democrat just shocked everyone and won Jeff Sessions' old Senate seat in Alabama.  One political observer noted that if the GOP is vulnerable in the deep south, they can be beaten anywhere.  My reply:

Especially if they nominate credibly-accused child molesters who think gay people should be in jail. So, yeah. Perhaps try to avoid such things & ignore the advice of the people who brought about this outcome! #spitballing https://t.co/moNScsDZlV

The Alabama GOP picked Roy Moore with eyes wide open, then largely stood by him as serious allegations from nine different women surfaced.  The result was a nearly inconceivable political catastrophe.  Let the nasty recriminations begin...