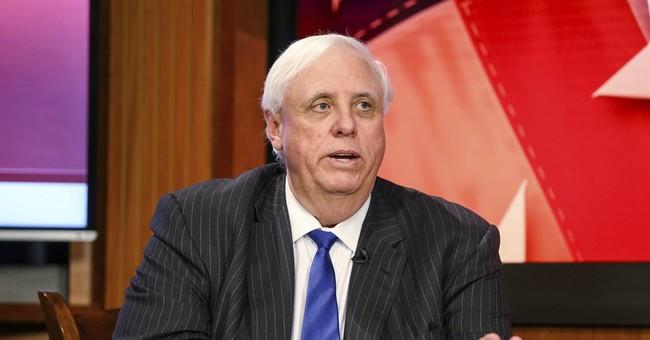 In Huntington, West Virginia, President Donald Trump talked about coal, American workers, health care, getting the country back on track, and his love for the state. There was also a surprise guest: Democratic Gov. Jim Justice.

Gov. Justice had a very important announcement, which is that today he will officially become a member of the Republican Party. West Virginia does produce Democrats of a more moderate to right-leaning mold. He declared that the current political situation didn’t afford him to serve the people of West Virginia efficiently while still being a Democrat. The transformation into a red state was pretty much complete, but this event could be the closing chapter. The state hasn’t voted Democratic since 2000 and many Democrats here voted for Trump due to the anti-coal crusade waged by liberal Democrats Barack Obama over the past eight years. For a time, it was weird in the sense that West Virginia might vote Republican in national elections, but Democratic at the state level. That’s long gone. With Justice’s defection, the GOP controls everything now.

1st time Rs have had unified control in WV since 1928.Shift is amazingly fast.When I graduated HS in 1991, there was ONE WV R state Senator.

Justice wasted no time to show he’s a team player. He knocked the media’s obsession with Russia, as it was reported that special counsel Robert Mueller has impaneled a grand jury for the Russia probe, and took a swipe at ex-White House Chief of Staff Reince Priebus’s name, saying we now have a new chief of staff in General Kelly whose name we can pronounce.

"Have we not heard enough about the Russians?" Governor Justice says.

Yet, he saw the writing on the wall politically. It’s better for governing and winning elections if you switch parties in West Virginia (via Washington Examiner):

One reason might be that West Virginia is tilting heavily Republican these days. It voted 68 to 26 percent for Donald Trump over Hillary Clinton, for example, the widest margin for a presidential candidate of either party in West Virginia history. That was also Trump's biggest percentage margin in any state.

Another possible motive: Justice may just want to get along better with a legislature long controlled by Democrats but now lopsidedly Repulican (22-12 in the Senate, 63-36-1 in the House). Another possibility: He's reputed to be a Trump pal. Like Trump, he owns a famous golf course, at the Greenbrier Hotel in West Virginia, where Sam Snead was club pro for many years.

The biggest reverberation may be on the 2018 Senate race. Joe Manchin was elected to the Senate as a Democrat in 2010 (to fill the term vacated by the death of Robert Byrd) in a 53 to 43 percent final and elected to a full term in 2012 with 61 percent. But Capito won the other seat in 2014 by a similar margin, and it would obviously be easier for Manchin to win as a Republican than a Democrat.

That may be awkward, as he's been lining up with all other Democratic senators on many issues, including healthcare. But will he want to buck Trump in a state the president carried with 68 percent of the vote (and where he's got a rally today?) I wouldn't bet too heavily on it.

So, what does that mean for GOP representation at the state level? It means that red America just got bigger. For Democrats, their journey out of the local and state level funk they’re in just got longer, as they now hold a record low number of governorships (via WaPo):

In terms of West Virginia policy, Justice's decision won't change much. Republicans control the state legislature and they could have just vetoed Justice anyway. (West Virginia is one of several states that requires a simple majority to override a governor's veto.) "It's not as though Jim Justice was holding back a tide of conservative legislation as a Democratic governor," Fiddler said.

But he may have a lasting impact on West Virginia politics. Republicans have long said that if they can turn West Virginia's governor's mansion red, they could keep it Republican for decades to come.

Obama lost the state by double digits twice, and all but one of West Virginia's five-person congressional delegation are Republicans. (And that lone Democrat, Sen. Joe Manchin, is up for reelection in 2018 and, because of the sheer dynamics of the state, is one of Democrats' most vulnerable.) The state legislature has been entirely controlled by Republicans since 2014. Neighboring Kentucky is seeing the same dynamics: In November, Republicans took control of the last state legislative chamber in the South, the Kentucky statehouse.

As we wrote back then, Democrats are basically extinct in the South. Justice may have just solidified that a little farther north, in West Virginia.

So, maybe switching parties might be a good thing concerning smoothing out some rocky relationships with the legislature. It’s not a bad move, though Carolyn Fiddler of Daily Kos, who was interviewed by the Post, disagreed.

“I'm surprised he'd opt to align himself with a party with such a damaged brand right now," she said.

Right, and Hillary Clinton’s brand was any better? The Democrats lost one of the most winnable elections in recent memory. They have no leader, they can’t raise money, they have no message, and they’re obsessed about Russia. We have an immense amount of nuance to consider with Trump as president now. The GOP remains strong in West Virginia and throughout the rest of the country. The GOP is the dominant political force in the country. They control 69/99 legislatures, two-thirds of the governorships (34 total), Congress, and the White House. You don’t get that by having a horrible brand.

All eyes will be on Sen. Joe Manchin to switch parties, though he remains a committed, albeit more conservative, member of the Democratic Party. He admits that he’s disappointed in Justice’s defection, but has vowed to work with anyone to help make his state better and to serve the people there.

Senator Joe Manchin in a statement says he is "disappointed" by Governor Jim Justice's decision to switch parties. pic.twitter.com/e1A3wAB4Jk

So far, the Democratic Party is still in the ditch and it looks like they got a bit deeper into the mud.

Share this on Facebook
Tweet
DeSantis Blasts Biden: 'Why Don’t You Do Your Job?'
Katie Pavlich
To No One's Surprise, COVID Has Returned to Wuhan...And It's Not the First Time
Matt Vespa
Psaki Again Blames Republicans for Crime Wave While Defending ATF Nominee Chipman
Spencer Brown
This Swing District Democrat Has an Uncomfortable Connection to Group Promoting Critical Race Theory
Rebecca Downs
Clown Town: COVID Experts Get Buckshot to the Face Over Latest Advice About Wearing Masks at Home
Matt Vespa
Only a Handful of Dem Governors Have Called on Andrew Cuomo to Resign
Madeline Leesman
CARTOONS | Gary Varvel
View Cartoon
Most Popular