The Cultural Cleansing of the Southern States Begins 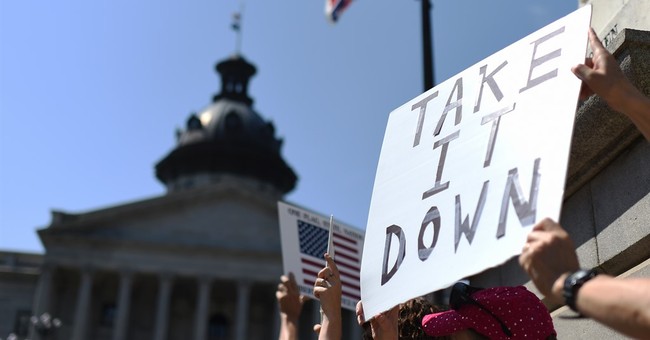 A full-fledged cultural cleansing of the Southern states is underway as lawmakers debate whether to remove Confederate flags and rename schools and parks named after Confederate war heroes.

There are also discussions in Washington, D.C. about removing Confederate-related statues from the U.S. Capitol — including a statue of Jefferson Davis, the former president of the Confederacy.

“It’s something to think about,” Sen. Harry Reid told reporters.

Republicans, meanwhile, are leading the charge in South Carolina and Mississippi to remove the Confederate flag — called a symbol of hate and racism.

Wal-Mart jumped on the band wagon, too – announcing they will remove all Confederate merchandise from its stores. EBay announced they will no longer sell Confederate flags or any other memorabilia.

Has the Department of Homeland Security classified the Sons and Daughters of the Confederacy as right-wing hate groups, yet?

Meanwhile, there are dozens of reports from around the southeast of lawmakers hoping to rename parks and schools and streets that were originally named in honor of Confederates.

*Tennessee lawmakers are demanding that a bust of Nathan Bedford Forrest be removed from the statehouse;

*St. Louis lawmakers are debating over the future of a confederate statue in a city park;

*Commissioners in Hillsborough, North Carolina are debating whether to remove the words “Confederate Memorial” from a Confederate memorial.

It won’t be too long before they start renaming cities and towns and counties named after Confederates. And I reckon it’s only a matter of time before they bulldoze the Confederate grave yards and war memorials too.

Maybe we can just pretend the Civil War never happened.

I’m assuming Hollywood will cooperate with the South’s cultural cleansing by eradicating any copies of “Gone with the Wind” and “Forrest Gump.” Forrest was named after the aforementioned Nathan Bedford Forrest.

I do wonder, though, about those good ole boys from Hazzard County. What are Bo and Luke Duke are going to do with the General Lee?

Maybe they could just paint a rainbow flag on top and call it the General Sherman.

He culturally cleansed the South, too.