Steve Buyer (pronounced Boo-yer) hails from rural Indiana, where he grew up along the banks of the Tippecanoe River. Not far from his childhood home, he resides with his wife, Joni, and their two children, Colleen and Ryan, in Monticello, Indiana.

He is a graduate of North White High School in Monon, and a distinguished military graduate with a degree in Business Administration from The Citadel in Charleston, South Carolina. Upon graduation from Valparaiso Law School, Congressman Buyer branch transferred to the Judge Advocate General Corps and was called to active duty for a period of three years. He was commissioned as a 2nd Lieutenant in the United States Army, and served his country as a Staff Judge Advocate in the Gulf War. Congressman Buyer continues his service as a Colonel in the Army Reserves.

In 1992, he was elected to represent the twenty counties of Northern Indiana. In 2002, due to congressional redistricting, Congressman Buyer ran and won election to represent Indiana's Fourth Congressional District, encompassing all or part of 12 counties in West central Indiana.

He also takes a personal and active interest in federal projects important to Indiana. He has shaped the realigned Grissom Air Reserve Base into one of the most thriving, joint use reserve military bases in the country located in north central Indiana. He played a critical role in ensuring that Crane Naval Surface Warfare Center in southern Indiana was left largely untouched in the 2005 BRAC. Congressman Buyer continues to shepherd the development of the Hoosier Heartland Industrial Corridor, funding for I-69 from Indianapolis to Evansville and to fund key segments of north-south and east-west corridors in the "doughnut counties" around Indianapolis,--effectively creating what is called the "Buyer Box" around Marion County to help move traffic safely and efficiently. He has secured critical federal funding for transportation projects in White, Tippecanoe, Clinton, Hendricks, and Johnson counties.

A man of principle, Congressman Buyer strongly believes in fulfilling his duty as an American citizen, even if it is unpopular. He closed his solo law practice in Monticello with three days notice to serve in the Gulf War; he served as a House Impeachment Manager in the prosecution of President Bill Clinton before the U.S. Senate; fought to prevent the disenfranchisement of military absentee voters during the 2000 Presidential Election Florida recount; and most recently was called to serve on the Congressional commission to assess government's reaction to Hurricane Katrina.

As Chairman of the House Armed Services Military Personnel Subcommittee during the 105th and 106th Congresses, Congressman Buyer championed the TRICARE-for-Life and the Senior Pharmacy entitlement program for Medicare-eligible military retirees-one of the most comprehensive prescription drug benefit plans in history. In fact, his effort on behalf of many of America's veterans was termed the "greatest expansion of health care benefits in a generation." Other significant accomplishments include creating a program to address soldiers on food stamps, reform the military retirement system, increase and improve military pay and benefits, led the effort to secure medical care for Reservists who suffer from Persian Gulf illnesses, and addressed recruitment and retention difficulties.

No longer a member of the House Armed Services Committee, Congressman Buyer serves as Co-Chairman of the House Guard and Reserve Components Caucus.

In January 2005, Congressman Buyer was appointed Chairman of the House Veterans' Affairs Committee. Since coming to Congress, his priorities have been to ensure that veterans with service-connected disabilities, those with special needs, and those who are indigent receive the best care. In 2005, after discovering significant shortcomings in the VA budget and its budget process, Congressman Buyer was able to quickly help provide $1.2 billion in supplemental funding. He is also committed to providing a seamless transition to soldiers as they become veterans, working on information technology services that streamline Department of Veterans Affairs (VA) healthcare system. Congressman Buyer has been a tireless advocate of giving the VA's CIO more authority which would save the Department $1.6 billion in wasteful and duplicative spending. In response to this legislation, in March 2006, Federal Computer Week named Congressman Buyer one of its "Federal 100" presented to those leaders who made a difference in the area of information technology in 2005.

Congressman Buyer is also a member of the powerful House Energy and Commerce Committee where he is using his seniority and past experience to tackle some of the most complex issues facing our country from health care to energy to telecommunications issues.

His home state of Indiana is one of the world leaders in the medical device industry and Congressman Buyer has been an advocate for years to strengthen the industry through less unnecessary regulation and unfair fees which stifle growth and innovation. His efforts have helped allow the industry to get to the market safer and in a more cost effective manner, medical instruments to improve quality of lives and save lives.

He was one of the five architects of the Medicare Prescription Drug Card which was used as a bridge from enactment of the law until the full benefit became available-providing immediate savings to seniors. He also was one of the leading proponents and creators of Health Savings Accounts (HSAs) and was instrumental in ensuring HSA's be included in the final measure which was ultimately signed into law by President Bush. Millions of seniors have saved thousands of dollars in prescription drug costs due to his work and countless families have benefited from businesses that now use HSA's to provide affordable health coverage.

In addition he has used experience as a conferee on the 1996 Telecom bill to play an important role in shaping America's telecommunications industry--working to forge the right balance between the need to encourage broadband deployment investment through deregulation and the need to have competition in the marketplace and provide consumers more choices in the marketplace.

In November 2005, Congressman Buyer was honored by The Citadel with the naming of the Buyer Auditorium, recognizing the "outstanding accomplishments of one of The Citadel's models of civic responsibility and dutiful public service." Recently, he was awarded an honorary Doctorate of Laws from The Citadel. 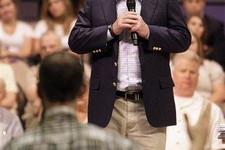