Ross Marchand
|
Posted: Jan 23, 2019 1:44 PM
Share   Tweet
The opinions expressed by columnists are their own and do not necessarily represent the views of Townhall.com. 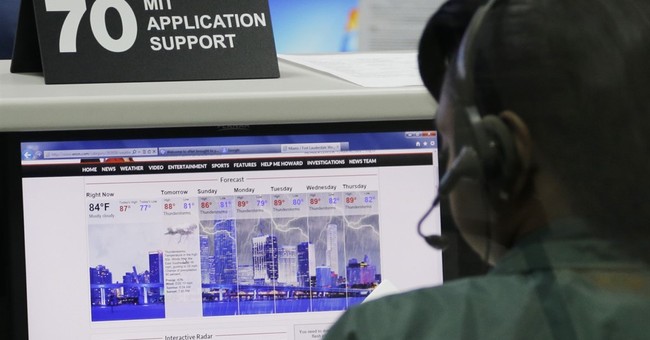 Opinion pieces have the potential to reignite much-needed conversations on reform - but not without stepping on some toes first. In response to my column on January 22 about privatizing the National Weather Service (NWS), a spokesperson for the National Oceanic and Atmospheric Administration (NOAA) issued a statement saying that the “National Weather Service has people working twenty four-seven during the shutdown to perform mission essential functions to protect lives and property.”  This includes “observations, forecasts, watches/warnings, and all of the infrastructure to support these operations,” which undoubtedly continue to be carried out in the midst of the shutdown. This point was never in dispute, as I clearly state that “weather forecasts nationwide are likely degrading in quality as many of the ‘non-essential’ workers entrusted to verify and fact-check them are not in the office.”

This is hard to dispute. The Washington Post reports that the Global Forecast System (GFS), America’s premier weather model, has seen a marked decline in accuracy due to the lack of staff currently working on the data and modeling. The NWS in State College, Pennsylvania echoed these concerns, noting that, "Global data ingest problems with GFS due to furlough make its solution dubious as performance has reportedly suffered."

Critically, the furlough of IT staff makes fixing and diagnosing any problem with the GFS far more difficult. Environmental Modeling Center union steward Suru Saha argues that, “Once the GFS scores start to go bad, it impacts everything,” ranging from national security to agriculture. This is not just a hypothetical concern, as GFS accuracy has been steadily declining for more than a week and is near monthly lows.

Before this decline in accuracy became particularly pronounced, NOAA deputy administrator Dr. Neil Jacobs said that any ebb in reliability was a regular “dropout” phenomenon, which “typically takes a day or two to return to its normal level of accuracy, as was the case with the dropout that occurred on Dec. 21.” This assertion has not aged well in the nearly two weeks since his piece.

The declining accuracy of models leads to DIY forecasting by private companies that normally rely on the accuracy of underlying NWS data to create their own customized, in-depth forecasts. If less-than-accurate GFS models ping-pong between an inch and 12-18 inches of snow in a single day, it’s up to AccuWeather and other private companies to speculate which is closer to the truth.

Instead of coming to terms with the common-sense idea that furloughs of IT staff and model analysts may be impacting forecasting, meteorologists affiliated with the NWS have taken to Twitter to dispute the accuracy of my January 22 column. One particularly strange sticking-point is my assertion that various regional offices (i.e. in Tampa Bay) have been “shuttered” due to the shutdown). Indeed, the doors are shut on public-facing activities, such as storm spotting training provided to the public as well as any educational outreach and tours. The doors are also shut to the aforementioned technical staff deemed “non-essential.”

The fact that these offices still provide (cruder-than-usual) forecasting services does not mean that the offices are not shuttered according to the way that media outlets typically use the term. Multiple news organizations, ranging from The Washington Post to CNBC to the Greater Baton Rouge Business Report correctly describe the Securities and Exchange Commission as “shuttered,” despite the fact that the staff continue to provide some essential services such as filing support and operating the Electronic Data Gathering, Analysis, and Retrieval system.

Exactly how literally words such as “shutter” should be taken effectively obscures a larger point: shutdown politics are a significant downside to the public provision of weather forecasting and shutdowns are getting far more frequent thanks to dysfunctional politics. Would more private forecasting lead to less communication/IT errors, such as the NWS’s “Biblical” flood warning that appeared to show waters about to envelop the entire Eastern US and Canada? Maybe, considering that federal technology in general seems to lag behind private industry. Whether or not privatization is the way to go, attacks and pushbacks by government agencies only succeed in promoting division and marginalizing debate. Thin-skinned attacks do nothing to stem the blizzard of problems that America presently faces.

NOAA’s reaction to my column may have been more a function of shock because not many people or news outlets question their data. I dared to present facts and ask questions – a healthy exercise for any government entity.