Ross Marchand
|
Posted: Jan 22, 2019 12:01 AM
Share   Tweet
The opinions expressed by columnists are their own and do not necessarily represent the views of Townhall.com. 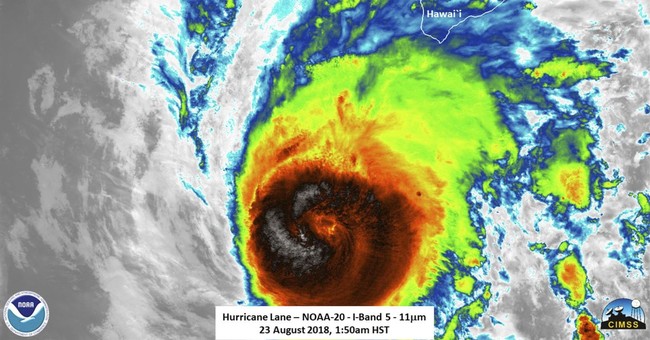 For residents of St. Louis, Missouri and Washington D.C. commuting to work surrounded by mountains of snow, it’s essential that they leave home equipped with an accurate weather forecast.   Yet, politics is rearing its ugly head and preventing Americans from getting the information they need to make safe travel choices. During the shutdown, the National Weather Service (NWS) is forcing Americans to undertake DIY forecasting. Even though the National Oceanic and Atmospheric Administration (NOAA, which oversees the NWS) has claimed that much of “operations are in excepted status and therefore remain in place to provide forecasts and warnings to protect lives and property,” compromised activities are already leaving millions in the lurch.

At least four NWS regional offices—in Tampa Bay, Florida, Springfield, Illinois, Phoenix, Arizona, and the Pacific Northwest — are likely shuttered until the shutdown ends. Meanwhile, weather forecasts nationwide are likely degrading in quality as many of the “non-essential” workers entrusted to verify and fact-check them are not in the office. This chaos sparked by the growing frequency of shutdowns raises a fundamental question of why should the government be in the weather tracking business to begin with? Given the overwhelming demand for on-time, accurate weather forecasting, it makes little sense why modeling and predicting isn’t paid for by the private sector. A little market ingenuity and competition can go a long way in making weather services better- without the shutdown drama and government ineptness.

In Back to the Future Part II, viewers see “Doc Brown” in the then-future 2015 checking his digital weather forecast to see when the rain is going to clear up. His “app” knew the exact time that the rain would stop, suggesting that weather services finally overcame their reputation of being infamously inaccurate. But in 2017, two years after this too-good-to-be-true future scenario, forecasting daily highs just 24 hours in advance typically err by three degrees. And because the NWS isn’t exactly known for talking about their errors and uncertainty in forecasting, consumers are likely to take the one reported figure as gospel truth.

But NWS errors can have far more dire consequences to consumers than causing them to over bundle or not take an umbrella.  In 2014, the NWS failed to communicate to the public and news organizations that a severe thunderstorm hurling “golf ball-size hail and winds over 60 mph” at Washington, DC, exposing millions of people to life-threatening conditions without any warning. Communication problems have gone the other way too, predicting emergencies when no danger existed, such as a “Biblical” flood warning that appeared to show waters about to envelop the entire Eastern US and Canada, despite “clear and conditions were so dry that a brush fire was burning in Edison, N.J., southwest of the city.” Similarly, for businesses, particularly in agriculture, who rely on the accuracy of weather forecasts, any errors could lead to significant financial losses.

It’s hard to know exactly how private competitors would stack up, since companies such as the Weather Channel and AccuWeather use and build on NWS raw data to produce better predictions than the government agency. Despite these companies’ reliance on the NWS for underlying information, the forecasts given by these private companies  is consistently more accurate than the federal government according to data compiled by Nate Silver. Competitive Enterprise Institute scholars Iain Murray and David Bier (now at the Cato Institute) note that, “the National Weather Service was twelve hours behind AccuWeather in predicting that New Orleans would be affected [by Hurricane Katrina].”

Private companies could go one step further and get the satellites and other equipment necessary to forecast the temperature and track storm patterns. Businesses such as SpaceX are deploying thousands of their own satellites into space, and the trend appears to be global. Even if the government wants to retain control of weather satellites, the large profit potential of private forecasting can ensure that these operations remain self-funding without the possibility of taxpayer assistance. Companies have also proven capable of having their own Doppler radar infrastructure, such as Fox 13’s SkyTower Radar.

Unfortunately, proposals to open up weather modeling and forecasting to private competition have so far failed to gain traction. In 2016, then Rep. Jim Bridenstine (R-Okla.) (now the head of NASA) introduced legislation barring NOAA from “starting new programs of record [for weather services] unless such commercial solutions have been exhausted.” It also mandated that NOAA “incorporate commercial solutions, including purchases of commercial data streams, to update, augment, or serve as a follow-on to its existing programs of record.” While this legislation didn’t go anywhere, the new Congress has an opportunity to seize the initiative and ensure a better, more reliable forecasting system.

Privatizing the NWS would ensure it was protected from the effects of any future government shutdown, and a competitive marketplace would ensure more accurate data gathering and more precise weather forecasts.

The NWS needn’t be compromised by shutdown drama and bureaucratic complacency. More competition could mean that the Back to the Future scenario could become a reality.