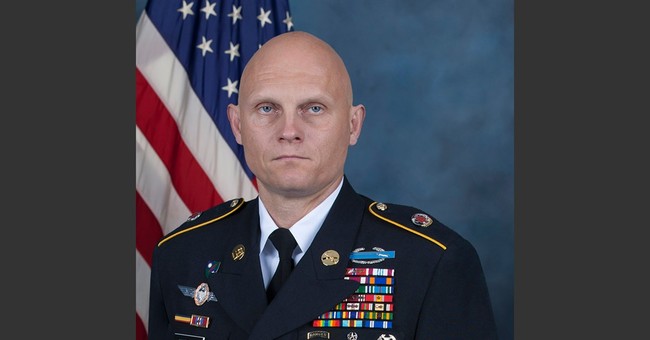 Just after dawn last Thursday, Master Sergeant Joshua Wheeler, along with his fellow soldiers in the U.S. Army’s Delta Force, rushed into a firefight to help Kurdish commandoes. The Kurdish-American mission? To rescue approximately 70 hostages held and threatened with “mass execution” at an Islamic State prison near Hawijah, Iraq.

Wheeler’s heroic actions helped save those commandoes and hostages. But the 39-year-old soldier from Roland, Oklahoma, was killed. Wheeler’s is the first American combat death in Iraq since November 2011, and the first American soldier killed by ISIS. Wheeler had 14 deployments to Iraq and Afghanistan and had earned eleven Bronze Star medals. He was a husband and father of four.
“I am immensely proud of this young man,” Defense Secretary Ash Carter told reporters the next day. Carter added that he expects “more raids of this kind” and for American soldiers to “be in harm’s way, no question about it.”
You see, explained the defense secretary, engaging in combat “represents a continuation of our advise and assist mission.”
That’s odd, because President Barack Obama presented the mission to the American people far differently, when, in June of last year, he sent 3,000 troops to Iraq. Then Mr. Obama clearly pledged, “We will not be sending U.S. troops back into combat in Iraq.” A month later the commander-in-chief reiterated unequivocally that, “American combat troops will not be returning to fight in Iraq.”
CARTOONS | Al Goodwyn
View Cartoon
Nonetheless, Americans are fighting and dying in Iraqi combat.
And without any declaration of war or even a legal authorization of force from Congress. The Obama Administration simply pretends the conflict can be lawfully waged under the 2001 AUMF, which specifically authorized actions only “against those responsible for the recent [9/11] attacks launched against the United States.” And Congress lets the administration fudge it.
Also last Thursday, thanks to the Benghazi hearings, we learned (without even a smidgen of doubt) that Hillary Clinton and the Obama White House indeed “knew” in real time that the 2012 attack on the U.S. consulate in Benghazi was planned and likely executed by an al-Qaeda offshoot, and not the spontaneous result of anger over a YouTube video.
Yet, Mrs. Clinton chose days later to mislead the families of the four Americans murdered in that raid by telling them an American video-maker was to blame. Moreover, she did not lift a finger to set the record straight when she knew the Administration was flat-out telling the public the same epic whopper.
Today, after the Clinton-Obama policy of leading from behind to achieve regime-change, Libya has disintegrated into chaos and civil war. No, Libya isn’t the sort of success story the administration claims for its foreign policy in Yemen and Somalia . . . which are also marked by chaos and civil war.
President Obama pledged we’d be out of Afghanistan by 2016, but recently announced a “modest but meaningful extension of our presence” — keeping the 10,000 troops currently stationed there for all of 2016, and then, in perpetuity, maintaining a force five times larger than previously planned.
Why? Because, after 14 years of conflict and nation-building, Afghanistan is still neck-deep in violence. Last month, the Taliban briefly captured Kunduz, a city of over 250,000 people. Going forward, Obama admitted, “There will continue to be contested areas.”
The Afghan government (like the Iraqi government) is not self-sustainable; nobody seems to know how many years or decades or centuries it would take to achieve anything like political autonomy.
Meanwhile, over in Syria, the U.S. — after much bluster and promise — cannot train more than four or five moderate soldiers, even after splurging a cool $500 million on the project.
The U.S. invaded and “regime-changed” Iraq, helping shape a new government and national army. With all that effort — and at a cost of thousands of lives — once our soldiers were no longer doing the daily fighting to tamp down the bloody sectarian unrest, ISIS formed, the Iraqi army ran away and the country soon collapsed into civil war.
The Iraq Conquest put southern Iraq into Iranian orbit. How many lives was that worth?
The problem?
Not military incompetence.
The mission is the problem. Has any politician or military leader plausibly put forth a plan whereby our country’s intervention actually creates an improved and sustainable political order in any of these nations?
If so, let’s see it.
If not, why are our soldiers still in harm’s way?
Progressives Are For Sure to Have a Meltdown Over Biden's Immigration Changes Next Month
Matt Vespa
Psaki Doubles Down on Democrats Wanting the IRS to Spy on Bank Accounts
Katie Pavlich
Whistleblower Says ICE Released Over 16,000 COVID-Positive Immigrants Into the US
Julio Rosas
The Price of Democracy: On the Murder of British MP David Amess and His Recent Townhall Column