Life Under an Iron Fist

Paul Driessen
|
Posted: Jan 16, 2016 12:01 AM
Share   Tweet
The opinions expressed by columnists are their own and do not necessarily represent the views of Townhall.com. 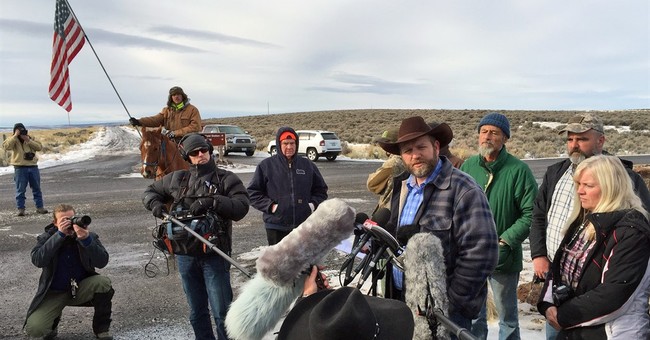 At its core, this is about the often callous, iron-fisted hand of the federal government being slammed down on American citizens. Examples abound – from the IRS targeting 200 conservative groups, to the seizure of cars and bank accounts of innocent business owners, to heavily armed Fish & Wildlife Service (FWS) agents bursting into Gibson Guitar facilities over phony exotic wood violations, to EPA destroying tens of thousands of coal industry jobs to “prevent climate chaos.” Making these outrages even more intolerable, those responsible are almost never held accountable, much less liable for damages.

Problems like these can become exponentially worse for people in one of the twelve western states where the federal government controls 30% (Montana), 49% (Oregon) or even 85% (Nevada and Alaska) of all the land. These government lands total 640 million acres: 28% of the entire 2.27-billion-acre United States.

Though they are often, incorrectly called “public” lands, the “public” has no fundamental right to enter them or utilize their water and other resources. They are federal government reservations, administered and controlled by agencies that increasingly want economic, motorized and many other activities prohibited and eliminated – under laws interpreted, implemented and imposed by officials in the FWS, Forest Service, Bureau of Land Management, Park Service and other federal agencies.

The feds also exercise effective, often punitive control over millions of acres of state and private lands located next to or in the midst of these government fiefdoms. People living in those areas rely on the federal reserves for forage, water, timber, energy, mineral and other resources that are increasingly made off-limits, on the ground that “beneficial uses” might impact wildlife, scenic or environmental values.

However, millions of people do have valid, existing, longstanding, protected rights to these lands and their resources, in the form of “appurtenances” conveyed to them by deed or will from the first settler or miner. The forage, water rights, range improvements, easements, rights of ways, mineral rights and other property interests that the first settlers created or were granted to these western lands are constitutionally protected and have been preserved in every federal land law ever enacted by Congress. Those rights cannot be summarily taken away – though federal agencies increasingly try to do so.

As an 1888 congressional report explained, the original idea for these lands involved use and protection: settlements, harvesting of commercial quality trees, watershed protection, and no land monopolies. Various laws allowed mining, oil drilling, ranching, farming and other activities, to supply food, energy and raw material needs, while early environmentalists wanted certain areas preserved as national parks and wilderness. Of course, modern resource use and extraction methods are far more responsible and environmentally sound than their predecessors, so impacts can be much better limited and repaired.

Nevertheless, “wise use” or “multiple use” is under attack, and such uses are now rare or nonexistent across many western and Alaskan government lands. Landowners who remain are barely holding on.

Imagine the feds owning half of Ohio or Pennsylvania – and gradually, systematically closing off access, taking away water and forage rights, banning economic uses, charging higher fees for remaining rights, forcing landowners into years-long courtroom battles, and refusing to pay up when courts order them to compensate owners for attorney fees and lost income. That’s the situation facing rural westerners.

The Hammonds got in trouble because they started a “backfire,” to burn combustible material, create a “fire break” and protect their home and ranch from a raging fire. They accidentally burned 139 acres of federal land before they put the fire out. Now they are serving five years in prison, even though Senior Federal Judge Michael Hogan felt a year or less was fair and just under the circumstances.

They could have been charged under a 1948 law that provides for fines or jail terms up to five years for setting a fire on government lands without permission. But they were not. Instead, the Obama Justice Department charged them under the 1996 Anti-Terrorism and Effective Death Penalty Act – as though what they did, in an honest attempt to protect their property, was an act of deliberate terrorism. That law requires a minimum five-year sentence. Judge Hogan’s lighter sentence was thus overruled.

Why would the DOJ do that? Probably because the feds never forget or forgive. Some years earlier, the Hammonds had removed a barrier the BLM had installed to block access to water they thought was legally theirs. Turns out it was. But they had failed to fully adjudicate their rights to the water – an oversight that they then fixed, thus safeguarding their rights. The Hammonds were also the only ranchers who refused to go along with a BLM “cow-free wilderness” plan. The feds were determined to get even.

Why would the Hammonds just give up and go back to prison? Because the DOJ wouldn’t budge, and they could not afford the huge expense of continuing to battle a vindictive federal behemoth. So now a middle-aged mom and elderly grandmother must run their 6,000-acre ranch, pay $200,000 more in fines, and hope they can avoid bankruptcy, which would result in BLM getting the Hammond ranch.

It is absurd, outrageous and infuriating. The Obama DOJ refuses to call Fort Hood, Boston, San Bernardino and other massacres terrorism – but it labels a backfire “terrorism.” But it gets worse.

Still worse, the BLM has often lit fires in Harney County and elsewhere (often on private land) that got out of control, burned extensive private property and even killed cattle. No one can recall the feds ever compensating ranchers for their lost livestock, fences or forage. In 2013, the Forest Service started two “prescribed burns” in South Dakota that blew out of control and torched thousands of acres of federal and private land. No federal employee has ever been prosecuted for any of those destructive fires.

To top it off, many of these fires are ultimately due to lousy management practices that restrict or prohibit tree cutting, tree thinning and insect control. That leaves vast tinderboxes of dry, rail-thin trees and brush ready to explode in superheated conflagrations that immolate wildlife and incinerate soil nutrients and organisms, ensuring that what’s left gets washed away in storms and spring snow melts. So the feds “protect” our treasured national forests from ranchers and miners by letting them go up in smoke.

But despite all these outrages, and not content with its already vast landholdings, the feds are trying to gain absolute control over all private lands still left in Harney County, and elsewhere. As Congressman Greg Walden noted in a January 5 speech, they are trying to drive ranchers and even joggers out of the Malheur Refuge. Failing that, President Obama might turn 2.5 million acres into a national monument.

The twisted saga is reminiscent of travesties under Stalin, Mao, Castro and other dictators. And it is just one of hundreds, some of which I will profile in future articles. It’s no wonder people are frustrated and angry – and some support Ammon Bundy and other activists who took over the Malheur headquarters. History will judge whether that peaceful occupation of federal property was wise, helpful or justified.

But many in the Obama Administration, news media, academia and general public certainly support or justify the seizure of college administrative offices, Occupy Wall Street encampments, and even Black Lives Matter kill-the-cops rants, Ferguson, Missouri riots, Palestinian attacks on Israelis, and Obama BFF Bill Ayers’ criminal activities. John Kerry went so far as to say, with Charlie Hebdo there was “perhaps … a rationale … [and] you could say, okay, they’re really angry because of this and that.”

So twelve Hebdo staffers murdered by Islamist terrorists is “rational” or excusable, but occupying a federal building is intolerable. We are dealing with a festering, growing, open wound. Congress, the courts and our next president need to heal it, and address the root causes, before things get out of hand.