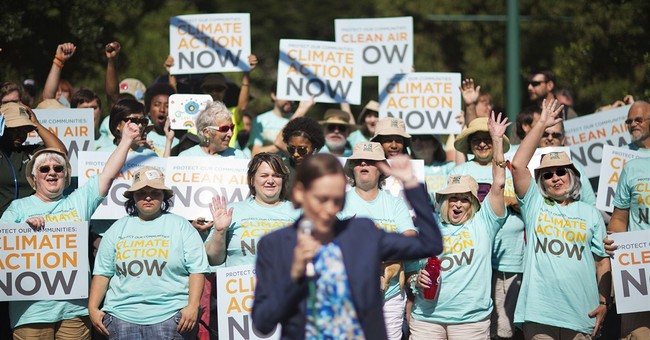 You’ve got to admit, liberal are masters at describing every initiative they launch as “the moral thing to do.” Their campaign for draconian energy regulations and a new global warming treaty is no exception. Protecting people, wildlife and ecosystems from climate catastrophes is the greatest moral cause of our time, alarmist scientists, activists, politicians, bureaucrats, clerics and journalists insist. Rubbish.

It has nothing to do with morality. It’s all about money, power and control. It narrowly defines “morality” to ignore the incredible benefits that fossil fuels and electricity bring to people everywhere – while dismissing the enormous harm their policies will wreak on families and ecological values that they profess to care so much about. And it makes no mention of the fact that they will rarely, if ever, be held accountable for their falsehoods and fraudulent science, or the damage and deaths they cause.

On March 31, President Obama promised to slash America’s carbon dioxide emissions 28% below 2005 emission levels by 2025 and 80% by 2050, taking us back to Civil War era emission levels, 150 years ago. He wants U.S. taxpayers to contribute our “fair share” to a new UN $100-billion-per-year UN slush fund to help poor countries adapt to and mitigate rising seas, storms and other climate change disasters that our plant-fertilizing CO2 emissions allegedly cause. He instructed his federal agencies to implement a host of new rules prior to the December 2015 United Nations climate conference in Paris.

Mr. Obama’s EPA will use “Clean Power Plan” and other regulations to shutter more coal-fired generating plants, issue new methane rules for landfills and natural gas production, funnel countless millions of dollars to activist and propaganda groups, and use sue and settle lawsuits to impose even tighter restrictions. FEMA will require that states use CO2-based computer models to determine how manmade climate change threatens communities, if they want disaster preparedness funding.

The Council on Environmental Quality will require that all applicants for federal project permits fully evaluate greenhouse gas emissions and potential impacts on climate change, to the satisfaction of bureaucrats and litigious Big Green pressure groups. The Department of Energy will issue new efficiency standards that double the cost of pickup trucks and appliances, and spend more taxpayer billions on wind, solar and biofuel loans and subsidies. The Interior Department will close more federal lands to drilling, and exempt more wind and solar projects from endangered species and other environmental laws.

The Overseas Private Investment Corporation and World Bank will refuse to lend money for coal-fired power plants, and even most gas-fueled generators and hydroelectric facilities, in developing countries.

These actions will have disastrous consequences. According to the Heritage Foundation, NERA economic consultants and other experts, EPA’s actions alone will cost hundreds of thousands of jobs and a $100-billion loss in gross domestic product.By 2030, America’s electricity output will drop by nearly 10% even as we add 54 million people to our population. Brownouts and blackouts will occur regularly, and we will be told to get used to using expensive electricity when it’s available, instead of when we need it.

Millions of middle class workers will get laid off – in coal mines, power plants, factories, shops and other businesses. Entire families and communities will be impoverished. Bread winners lucky enough to find work will be forced to work multiple jobs, commute longer distances, and suffer severe sleep deprivation.

Families will have to cope with more stress, depression, drug and alcohol abuse, spousal and child abuse. Nutrition and medical care will suffer. More people will have strokes and heart attacks. More will die. But the White House, EPA and other federal agencies studiously ignore these impacts. The only moral issue they want to talk about is alleged impacts fromexaggerated and fabricated manmade climate change.

Two-thirds of Florida’s endangered manatees survive cold winters by huddling in warm waters that flow from coal-fired power plants. EPA’s plant closures could cause hundreds of them to die, while millions of birds and bats will be slaughtered every year by proliferating wind turbines.

Meanwhile, thousands of elderly people perish every winter from hypothermia, because they can no longer afford to heat their home properly, due to soaring electricity costs under Britain’s climate policies.

In poor countries, millions already die every year from lung and intestinal diseases, because of polluted air from open cooking fires, filthy water, spoiled food, substandard hospitals and squalid living conditions – because billions still do no have access to electricity. Imagine your life following hurricanes or other natural disasters that make electricity and safe water unavailable for a week or month. Then picture living that way for decades on end. White House, World Bank and OPIC policies will save people from “climate disasters” decades from now by killing them tomorrow. This they pass off as morality.

In the years since EPA Administrator William Ruckelshaus banned DDT in 1972, tens of millions of Africans and Asians died from malaria. Now his daughter is promoting similarly deadly policies, as lead author for the National Climate Assessment, which hypes every exaggerated and imaginary climate scare imaginable. Other Big Green and Climate Crisis radicals oppose GMO crops and chemical fertilizers, and insist that starving, energy deprived families limit their living standards to what is dictated by climate activists and supported by wind, solar and biofuels. The death tolls continue to mount.

African Development Bank’s president Donald Kaberuka says poor nations will no longer tolerate these hypocritical, lethal policies. His bank will continue loaning money for coal-fired generating units. But in a perverse irony, the absence of World Bank and OPIC money means those projects will not have sufficient funding to install modern, readily available pollution controls. So millions of families will finally have electricity and won’t be sickened by wood and dung fires, but new pollutants will needlessly afflict them.

China, India, Germany, Poland and other countries are also building coal-fueled power plants at a steady clip. And Russia says it will “comply” with any new treaty primarily by emphasizing CO2 reductions due to absorption by forests. At this rate, the United States will soon be the only nation that strangles its economy and imperils people’s health and welfare in the name of stopping climate change.

But the Obama Administration is imposing its authoritarian policies anyway – and justifying them by falsifying temperature data and ignoring the reality that: (1) rising carbon dioxide levels are improving crop and tree growth; (2) temperature, hurricane, sea ice and other trends contradict climate models and manmade disaster hysteria; and (3) any human influences on the climate are drowned out by the sun, deep ocean circulation patterns and other powerful natural forces. No wonder alarmists won’t debate skeptics.

Earth’s climate and weather will continue changing, because the forces driving them are always in flux. We simply have to adjust to them. But Obama prefers the Lewis Carroll approach to climate and morality.

“When I use a word, it means just what I choose it to mean – neither more nor less,” Humpty Dumpty told Alice,“The question is, whether you can make words mean so many different things,” Alice replied. No, Humpty responded. “The question is, who is to be master, that’s all.”