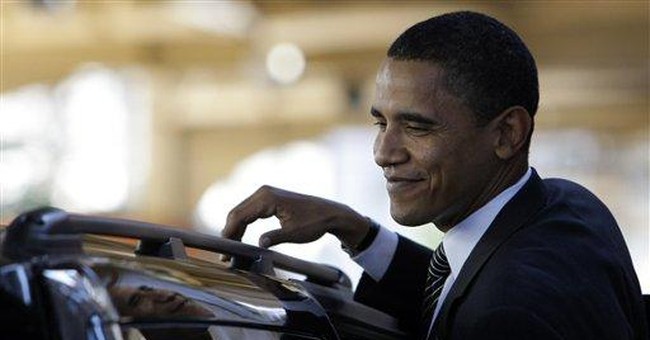 My wife used to say that I'm like a dog with a bone, I just won't let certain things go. I'm beginning to believe her.

I simply cannot get the prospect of Sen. Barack Obama removing huge American flags from the back of his campaign plane for some goofy, Oprah Winfrey-like logo, out of my mind.

When the Obama campaign spent a ton of money "re-furbishing" the huge Boeing 757 that the candidate and his entourage fly in, most of the media attention was focused on the interior of the plane. And why not? Seeing how Obama now sits in a big high-backed, leather chair in his spacious front compartment with the words, "Barack Obama, President" stitched on the back is a pretty jarring glimpse into the man who has to be one of the most arrogant people ever to run for president in the history of the country.

"President?" Stitched on the back of his leather seat? Good Lord, I thought his lame attempt at creating a faux presidential seal, a circular design that was going to be placed on every podium where he gave a speech that looked just like the official presidential seal was bad enough.

And I've heard the reports of how his staff affectionately refers to the 757 airplane as "O-Force One." Somehow, an image of Ronald Reagan always putting on a suit and tie before even entering the Oval Office comes to mind. Obama and his staff's sheer disrespect for the presidency is probably causing the Gipper to spin in his grave.

But what I can't let go is what Obama and his people did with the exterior of the plane.

The aircraft is chartered from a company that had giant American flags on the sides of the rear tail fins. When Team Obama decided it was time for a new paint job, the huge flags were replaced by an ugly, New Age-type, stupid oval "O" with red, white and blue colors.

I suppose one could argue that at least they kept America's colors. But then again, that's sort of like saying that someone who has an American flag sewn onto the butt of their jeans is showing respect for the USA.

So now when the Messiah of politics pulls into any airport in the country, his fainting fans get to see a huge jet with the words, "Change We Can Believe In" on the sides and a goofy-looking red, white and blue "O" on the back where the giant American flags used to be.

You know, all this Obama talk about change has me so doggone nervous. In his world, change means a candidate refusing to wear an American flag lapel pin (until he is finally shamed into doing so); change means standing on a stage with a bunch of other political types and when the Star-Spangled Banner is played, putting his hands over his crotch rather than over his heart (like the rest of the people on the stage were doing); and change means having big, beautiful American flags removed from the official aircraft, covered up like a tired, old furniture store sign in a bad part of town.

Before you accuse me of picking nits, consider this: there is simply no way that this savvy political machine called the Obama campaign would be oblivious to the reaction they would receive to the changes they've made to their candidate's plane. Don't you think they knew that reporters would notice the word "president" stitched onto the back of his seat? Wouldn't you think they're aware of the fact that the whole world is watching the big Boeing 757 with the idiotic "O" logo on the plane where the flags used to be?

It doesn't matter to him if his staff calls his ostentatious, expensive plane, "O-Force One." He doesn't give a rat's rear end if people object to his refusal to embrace the flag, the very symbol of this great country.

This former community organizer thinks he's got everyone eating out of the palm of his hand right now. And he sure doesn't need some schmaltzy American flag to distract him.