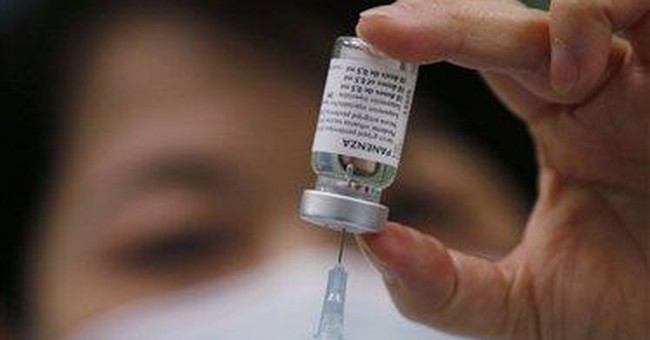 Hidden within the latest edition of the Centers for Disease Control and Prevention's FluView was this sentence: "The proportion of deaths attributed to pneumonia and influenza was below the epidemic threshold."

That's right: The great American swine flu epidemic - which led to two proclaimed national emergencies and thousands of spooky news stories - has ended with a whimper.

Like all infectious disease epidemics, swine flu followed a bell curve. It peaked in mid-October, before anybody was vaccinated.

Only 161 new infections were reported to CDC-monitored labs last week, compared to 11,470 at the epidemic's mid-October peak. Only one state (Alabama) still reports "widespread activity." Deaths and hospitalizations were 14 and 374, respectively, compared to 189 and 4,970 a week at the peak. To put that in perspective, the CDC estimates that an average of 257 Americans normally die of seasonal flu every day during the season, or about 36,000 a year.

Repeat, the American portion of the first flu pandemic declared in four decades - which just weeks ago spawned such headlines as "CDC: Cases, Deaths Are Unprecedented" - is over.

So where do the swine flu numbers go from here? Not to zero, unfortunately. Rather, we're at what's called an "endemic" level: We can expect infections, hospitalizations, and deaths to continue at something similar to the current rate until the end of flu season, in the spring. (That means there's still plenty of time to get your shot if you haven't yet been infected or vaccinated yet.)

But, judging by what we've seen so far in the United States and elsewhere in the world, especially in New Zealand and Australia, the flu season will continue to be quite mild. In both of those Southern Hemisphere countries, where winter has ended, there have been far fewer flu deaths than was normal during their past seasonal flu epidemics. Yet swine flu accounted for virtually all their cases, and no vaccine was available. In addition, these countries saw the season peak only once, without the "next wave" we've been warned of.

Why were there so few flu deaths? First, swine flu is vastly milder than the seasonal variety. According to the latest CDC estimate, while seasonal flu kills between one in 480 to one in 1,700 Americans infected, swine flu has killed only one person for every 5,000 infections. (Even that estimate is probably high, given the vastly lower death rates in comparable industrialized nations, such as France and Japan.)

Second, swine flu is more contagious than the seasonal flu strains, essentially muscling them aside. And people infected with swine flu appear to be immune to seasonal flu, just as the mild cowpox virus inoculated people against the fearsome smallpox virus (as the famed vaccine inventor Edward Jenner noted). Of those 161 new flu cases reported to the CDC last week, only four clearly weren't swine flu.

The epidemic never really made it out of the starting gate.

You may recall all those additional deaths we were supposed to suffer as a result of swine flu - 30,000 to 90,000, according to the President's Council of Advisors on Science and Technology (a number I previously disputed); or "89,000 to 207,000," according to an op-ed by author John Barry. But like New Zealand and Australia, the United States can actually expect considerably fewer overall flu deaths because of the swine flu.

That means that except for the incredible amount of resources - including oceans of hand sanitizer - misspent fighting an alleged raging razorback that proved to be a mere piglet, swine flu will be a net blessing.

The media are finally beginning to admit that the World Health Organization's "pandemic" - made possible, as I've argued before, only by completely redefining the definition for political reasons - is the mildest ever. Several European countries have cut back their vaccine orders, and the chairman of the influential health committee of the Parliamentary Assembly of the Council of Europe, who is an epidemiologist, has asked the body to investigate what he calls the WHO's "false pandemic" and "one of the greatest medicine scandals of the century."

Yes, the WHO and the media really pulled a fast one on us. But we've surely learned a lesson from the pandemic panic - at least until the next celebrity virus comes around.