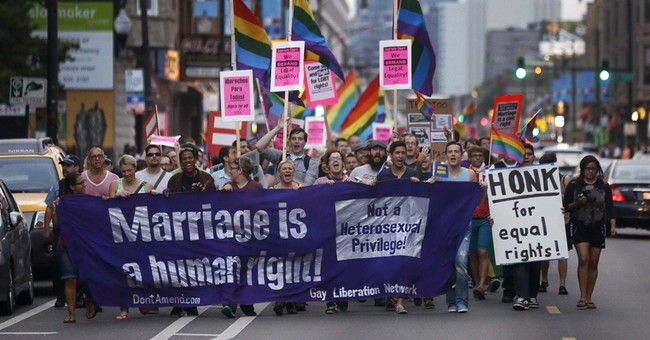 At a time when so many of our Christian leaders are guilty of compromising the gospel before the media, dishonoring the Lord as they try to make God’s Word palatable to the world, it was an older British woman, nearly 70 and the owner of a bed and breakfast, who displayed a backbone of steel, a deep and consistent faith, and a theological clarity while being grilled on national TV. Cheers for Hazelmary Bull!

Hazelmary and her husband Peter, already in his 70’s, owned and operated a bed and breakfast in Cornwall, England for three decades. Five years ago, they refused to rent a double-bedded room to a homosexual couple, since they only rent these rooms to married men and women, as stated plainly on their website.

The two men were offended and took the Bulls to court, and this Christian couple was found guilty of hurting the feelings of the gay couple, fining them more than $6,000.

The Bulls are now appealing that decision to UK’s Supreme Court, although due to decreased business they have had to close down their bed and breakfast. Since the court case, they have also suffered personal death threats as well as vandalism to their building, but they have not backed down from their convictions.

In an interview on ITV Daybreak on October 8, 2013 with Aled Jones and Lorraine Kelly, Hazelmary did all the talking, with Peter nodding in agreement and then affirming his wife’s position at the end of the interview.

And make no mistake about it. This is not some slick, camera-friendly couple, versed in the latest clichés and fitted with the coolest wardrobe. This is a couple grounded in the Word and committed to Jesus. Today’s Christian leaders could learn well from her example.

When asked why they were going ahead with the appeal after all they had been through, Hazelmary replied, “. . . the reason we have continued with this is because we feel there are augments to be made, because we are hoping some way or another, a pathway will be found through this so that two different lifestyles, which at the moment have had a head-on collision, two different lifestyles could live together in our society.”

Her purpose, then, is marked by conviction and conciliation: How can we live together in the same society when we have such different convictions?

Lorraine Kelly: “May I suggest that maybe you are in the wrong business? Because when you think about it only 40% of couples now are actually married, so when you do that, forget all the arguments and all the rest, but actually from a business sense, it really doesn't make any sense.”

Hazelmary Bull: “No, on the face of it, it looks like that because we have always refused a double-bedded accommodation to unmarried heterosexual couples.”

When challenged by Kelley, she explains, “It’s Bible based, it’s entirely Bible based.” (Pastors, take note of her words: This is how we should operate our local assemblies as well, based on the Word, not on marketing principles.)

Aled Jones: “As a Christian, the God you worship is a loving God, is a tolerant God. And if people are in a civil partnership, they are obviously in love, what is wrong with them sharing a bed?” (Note that Jones came to national fame as a hymn-singing child, and in 2004, he was voted Religious Broadcaster of the Year by the Churches Media Council for his work with Songs of Praise. He still hosts BBC’s Songs of Praise Show, and within the last four years he has released albums featuring hymns and Christmas songs. What in the world happened to Aled Jones?)

How does Hazelmary reply to his challenge? You’ve got to love this!

Hazelmary: “I think it’s a myth to believe that entirely. He is a loving God, that's true, He's a forgiving God, but there is . . .”

Jones: “And a tolerant one?”

Hazelmary: “He is a long suffering God, He’s not entirely tolerant because the Bible is full of cases when he does finally bring judgment about. We felt we wanted to, as far as possible live according to His instructions and the Bible is very clear about marriage.”

Boy did she nail it! There is a difference between God being longsuffering and God being tolerant, and yes, “He's not entirely tolerant because the Bible is full of cases when he does finally bring judgment about.”

Do you think we’ll be hearing a lot of lines like that from some of the pastors featured on “The Preachers of L.A.”?

Hazelmary: “We find this thoroughly regretful, because we clearly state that we prefer to let double bedded accommodations to married couples.” (She then explains, in answer to Kelly’s question, that this is clearly stated on the website.)

Kelly: “When two people check in how do you know that they are married or not?”

Hazelmary: “That's a fair question. We have a script and we try very hard not to offend, remember we have been there for 28 years and this is the first time we have had any problems. We have a script by where we say very gently and politely, if one person shows up at the door say it’s a male, we say is this for you and your wife? And oddly enough they will say no actually is my partner or my girlfriend or whatever.”

How telling! They never had a problem when refusing an unmarried heterosexual couple over the course of 28 years, but when it comes to two gay men, the Bulls are brought to court.

Kelly then points to the low percentage of couples in the UK who are marrying, to which Hazelmary responds: “Well I'm not really interested in the numbers, don't know anything about the numbers because we’re running this –”

Kelly: “Well you should as a business person.”

Hazelmary: “Well we’re running this under our own roof and God demands that our faith doesn't end” –

Kelly (interrupting with some hostility): “Your God demands, your God”

Hazelmary (without batting an eyelash): “God demands that our faith doesn’t end at the kitchen door. He means for your faith to run through every corner of your life. You cant just section Him off like that. So one would think dealing with Christians we would be fair and honest and upright and honorable, according to the Bible, because the Bible is the Christian’s textbook.”

Now go watch the video, give it a thumbs up, and share it with your friends.

It’s a testimony like this that should go viral, rather than the words of some preacher who is waffling, unclear, and not-wanting to sound close-minded or offensive.

Let’s speak the truth in love without making excuses, just as our courageous sister did.

God himself will back us, and the haters and mockers will not be able to shout us down.