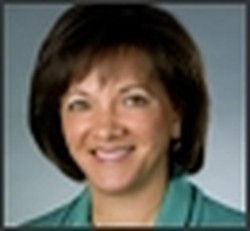 Lurita Alexis Doan (born January 4, 1958), is an African American, conservative commentator discussing issues affecting the federal government. Doan was the host of the weekly opinion editorial, Leadership Matters, which was nominated for the Pulitzer Prize for Commentary in 2009. Doan is a regular contributor to The Arena at Politico.com and to Biggovernment.com, and has published opinion editorials in major U.S. daily newspapers, such as USA Today and The Los Angeles Times. Doan has also appeared as a guest contributor on Fox News, CNN and other cable networks with commentary on fiscal discipline, government contracting practices, the federal budget and current affairs.

Lurita’s tenure at the nation’s premier procurement agency was marked by a return to the fundamentals of business best practices and fiscal discipline that date to GSA’s creation in 1949, as well as a wave of award-winning, innovative ideas.

Lurita has received numerous awards for innovation. In 2008, Lurita received the prestigious “Friend of the Americas” tri national award for her advocacy and innovation for land ports of entry by representatives from Canada, the U. S. and Mexico. Previous recipients include Secretary Tom Ridge and then-Governor George Bush. Doan was identified in February 2008 as one of the 25 Most Influential Black Women in Business.

Prior to her tenure in public service, Lurita founded a surveillance Technology company in 1990. She was selected as one of SBA’s Women Business Owner Success Stories for its 50th Anniversary Celebration. Among Lurita’s business awards are the 2004 National Women’s Business Council Award for entrepreneurship, the 2003 National Director’s Award for Entrepreneurial Innovation from the Department of Commerce, the 2003 Committee of 200 Luminary Award for Innovation in Technology, and the 2003 Visionary Award from the National Foundation for Teaching Entrepreneurship. Lurita sold the company in 2005.

Lurita is a native of New Orleans whose home in the 9th Ward was destroyed in during Hurricane Katrina. She is descended from three generations of African-American entrepreneurs. Lurita holds a Bachelor’s Degree from Vassar College and a Masters’ Degree from the University of Tennessee-Knoxville. She and her husband have two daughters and live in Northern Virginia.

Feb 20, 2012
Obama's Deep Disrespect for Congress and the Rest of Us

Nov 28, 2011
The Gimme Something Congress and the Public Service Failure