Congressman John Sullivan is a fourth generation Oklahoman, who has tackled many key policy issues since being elected to Congress in 2002.

During his time in Congress, Congressman Sullivan has fought hard for his constituents with the common sense Oklahoma values of less government, fiscal restraint and working to ensure that Americans keep more of their hard earned tax dollars in their pockets and out of the hands of Washington bureaucrats. Congressman Sullivan is a cosponsor of the Fair Tax Act, which will abolish our nation’s dated tax system. As a member of the Republican Study Committee, a fiscally-conservative group of House members, Congressman Sullivan has taken the lead to slow the growth of the federal government and control runaway spending.

Congressman Sullivan is pleased to continue his service on the influential House Committee on Energy and Commerce. The oldest legislative standing committee in the U.S. House of Representatives, this committee is responsible for legislative oversight relating to telecommunications, consumer protection, food and drug safety, public health, air quality and environmental health, the supply and delivery of energy, and interstate and foreign commerce. Within the House Energy and Commerce Committee, Congressman Sullivan is proud to serve on the Health, Environment and Hazardous Materials, and Energy and Air Quality Subcommittees.

As a member of the powerful House Committee on Energy and Commerce, Congressman Sullivan has continually called for a comprehensive national energy policy, which includes decreasing our dependence on foreign oil and increasing refining capacity in the United States. His seat on the Subcommittee on Health will help him develop a plan for a comprehensive overhaul of our nation’s health care system. It is essential that all Americans have access to affordable health care and that we focus on both preventative care and long term care solutions. He also serves on the Subcommittee on Commerce, Trade and Consumer Protection.

Congressman Sullivan has also been influential in the area of immigration reform. He has continually called for an increase in border security and for no amnesty for those who are already in the United States illegally. Congressman Sullivan is responsible for increasing the U.S. Immigration and Customs Enforcement Agency’s Oklahoma City field office from a mere four field agents to their current twelve agents and bringing the U.S. Department of Homeland Security’s 287(g) immigration training program to Tulsa. In addition, he previously introduced legislation to expand their operations to eastern Oklahoma and open a field office in the Tulsa area. A visit to the U.S.-Mexico border in October 2005 confirmed his fears that too many illegal aliens and potential terrorists were slipping into the United States undetected.

Congressman Sullivan was born and raised in Tulsa, Oklahoma. The oldest of four siblings, Congressman Sullivan’s parents, Daniel and Mag Sullivan taught their son the importance of faith and family. He still resides in Tulsa with his wife, Judy, and his four children: Tommy, Meredith, Sydney and Daniel. Congressman Sullivan graduated from Northeastern State University and, prior to being elected to the U.S. House of Representatives, worked as a small businessman in Tulsa in the fields of energy, transportation, real estate and investments. His prior experience in the Tulsa business community gives him a unique understanding of some of the major legislative issues facing the First District. Congressman Sullivan was also proud to serve the Tulsa area in the Oklahoma House of Representatives for seven years, including acting as minority whip. During his time in Tulsa, Congressman Sullivan and his family continue their long and abiding history of volunteerism through active involvement in organizations such as Tulsa Catholic Charities and Bishop Kelley High School. 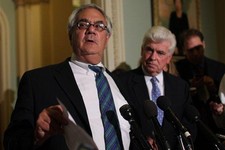