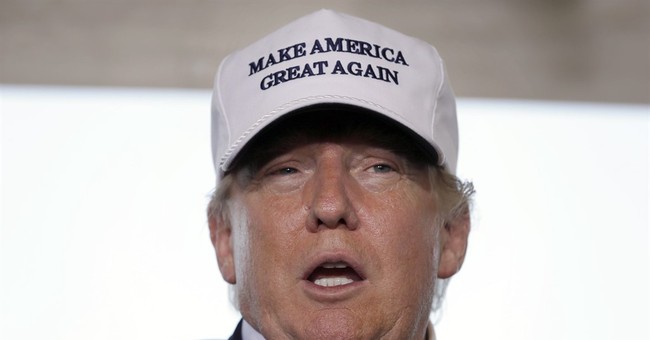 Over the last few weeks we’ve seen Republican consultants and pundits publicly fretting about whether Donald Trump will hurt the GOP’s brand.

When do those people start worrying about what Mitch McConnell, John Boehner and the rest of the GOP’s leadership are doing to the Party’s brand? Just this week-end, McConnell shut down efforts to defund Planned Parenthood, fight sanctuary cities, kill Obamacare and stop Iran from getting nukes because they might get in the way of pushing corporate welfare. At this point, Boehner and McConnell might as well just wear the logos of the corporations and wealthy donors that sponsor them because they’ve turned their backs on conservatives and the country to cater to them.

So, don’t worry about Donald Trump. Trump is good for the Republican Party.

1) Trump is knocking the GOP Establishment back on its heels: Yes, Trump did go over the line with his “I like people who weren’t captured” remark about McCain, but when all was said and done, it was the Maverick who got pancaked. Not only did McCain end up getting major blowback for calling Trump supporters “crazies,” he also made an enemy of a billionaire who’ll be willing to pour millions into a campaign to take him out in a primary. To add insult to injury, Trump is now polling better with veterans than McCain. Trump has also smashed Lindsey Graham, slapped Karl Rove and ceaselessly attacked Jeb Bush. If Trump does nothing else other than stop a few dozen super wealthy families from making Jeb Bush our nominee, we should build a larger than life statue of him with his name in gold at the bottom as thanks.

After Reince Priebus at the RNC started to interfere in the presidential primary by attacking Trump and there were rumblings that Trump should be left out of the debates, we started hearing that the Donald might run third party. After that, Reince Priebus suddenly remembered what his job was again and started calling on everyone to be civil.

On top of all that, many people believe that Trump’s surge in the polls is a direct result of how unhappy many conservatives have become with the Republican Party. That should be a wake-up call for the GOP. In fact, if it isn’t, then the next one will probably come after we start bleeding seats on Election Day once we don’t have Obama to kick around anymore.

2) He’s sucking up all the oxygen: It’s true that Donald Trump is dominating the coverage of the 2016 presidential election, but that’s a double-edged sword. Yes, it does mean that candidates like Bobby Jindal and Mike Huckabee are going to have trouble getting enough coverage to gain steam.

However, there’s a huge plus to the “all Trump, all the time” coverage that most people have missed. In the 2008 and 2012 elections, the mainstream media and the establishment picked the candidates they liked best (McCain and Mitt) and then they systematically destroyed anybody else who started to get any traction.

3) He’s forcing the other candidates to up their game: If candidates use nothing but “safe” boilerplate jargon to ensure that they don’t offend anyone and act as if we have a thousand years to fix the problems we have in this country, that’s fine, but no one’s ever going to hear their name with Donald Trump in the race.

Because of that, the GOP candidates have been forced to do more to get their names out there.

Ted Cruz called out Mitch McConnell for lying to Republicans on the Senate floor. Rand Paul took a chainsaw to the tax code. Bobby Jindal is threatening to arrest the Westboro Baptist Church wackos if they protest the funerals of mass shooting victims. Mike Huckabee pointed out that Obama’s Iran deal very well may lead to a genocide like the Holocaust.

These are all GOOD THINGS.

We need candidates who can communicate, who show some fire and who have a sense of urgency about addressing the problems that are confronting America. Trump is helping to bring that out in the rest of the field.

4) He’s getting the candidates talking about issues that matter to people: The failed Republican leadership in Congress has made it abundantly clear that it doesn’t care about anything other than slavishly serving the interests of a few thousand ultra-wealthy donors and corporations.

Meanwhile, Donald Trump is talking about securing the border, looking out for veterans, fixing the lousy trade deals we make in this country, getting our hostages out of Iran and stopping the massive crime wave that has been created by taking in so many illegal immigrants. These are issues that come up again and again when real people are talking as opposed to issues the GOP leaders talk about with the lobbyists that pay them off.

Suddenly, even people who hate Trump’s guts are talking about sanctuary cities because he turned it into an issue. Quite frankly, neither party is looking out for the best interests of the American people on illegal immigration; so it’s refreshing to see the GOP field being forced to address it. It shouldn’t have taken Trump to get a real conversation going.

5) He's teaching Republicans they don't have to surrender: No politician should want to needlessly offend people, but on the other hand, it’s impossible to accomplish anything without making some people angry. Unfortunately, most Republicans don’t seem to understand this and have allowed cowering to become their standard operating procedure. In fact, the GOP has become such a group of timid, knock-kneed, namby-pamby pushovers and wimps that Republicans don’t do much of anything other than just sit of their behinds and beg the Democrats not to beat them too badly.

Trump is showing Republicans that it’s possible to do something different. Yes, you don’t have to apologize just because the mainstream media demands that you do so. Yes, you can hit back even harder when you’re attacked. Yes, you can stick it to the press when it treats you unfairly.

In all fairness, other Republicans like Newt Gingrich, Ted Cruz, Rand Paul, and Mike Lee have done this as well, but Trump has made it the centerpiece of his campaign and it has taken him all the way to first place when NO ONE expected him to rise that high. The Republican Party is called the “Stupid Party” for good reason (Watch Mitch McConnell and John Boehner and you’ll see why), but even Republican politicians can learn a lot from the way Donald Trump has brawled his way to the top of the heap. Even if it doesn’t last, no one will forget that Republicans voters love a fighter.