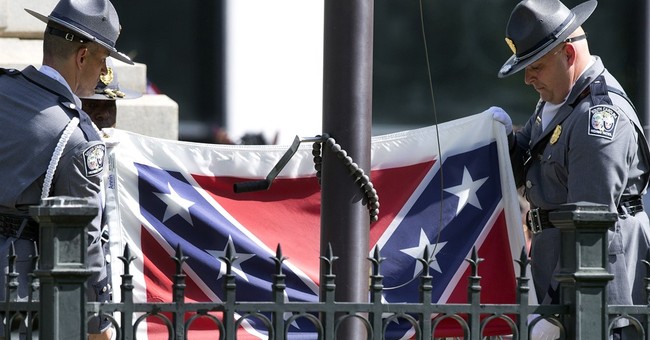 I don’t care about the Confederate flag or the Confederacy. Additionally, I was and continue to be largely indifferent as to whether the Confederate flag flies over government buildings. If I were forced to make a call on it, I’d generally lean toward taking it down just because I do understand how many black Americans could genuinely see the Confederate flag as a symbol of slavery and racism. It isn’t a Jesse Jackson, Al Sharpton and the #blacklivesmatter idiots that are looking for something they can use to get on TV thing; it’s something real that anybody can empathize with, even if they don’t necessarily agree.

However, an intellectually honest and decent person would have to admit that there are also many people, perhaps even a majority of people who fly the Rainbow flag, who don’t view it that way. They look at the Rainbow flag as an expression of lesbian, gay, bisexual, and transgender pride or as a way to support gay rights.

That being said, any intellectually honest and decent person would also have to admit there are millions of people with a soft spot for the Confederate flag who are serious when they say “Heritage not Hate,” who see it as respect for their non-slave-owning ancestors who fought and died defending their homes or who just appreciate the spirit of rebellion behind it.

So, after nine innocent black Americans were murdered by a loathsome racist who doesn’t even deserve to have his name written in this column, legislators in South Carolina voted to take the flag down. Most of them didn’t vote that way because they think the flag is racist or hateful. They also didn’t do it to get votes because they know that 90% of the black Americans in South Carolina are going to vote for the Democrats next year, no matter what happens. Those Republicans voted to take that flag down out of a spirit of reconciliation and a desire to send a signal to black Americans that they found what the killer did to be repulsive.

That kind gesture they made was repaid with evil.

Instead of saying, “We wish you’d have taken the Confederate flag down a long time ago, but it is nice that you’ve done it now,” a vicious hate campaign has been waged against millions of Southerners.

The Dukes of Hazzard, which was a family-friendly show about some “good ol' boys, never meanin' no harm” has been yanked off the air because the car in the series has a Rebel flag on it. People are demanding that Gone With The Wind no longer be shown. Wal-Mart is refusing to make class rings for high schools that have a Rebel flag as part of their insignia. Apple pulled a Civil War game because it had a Confederate flag in it representing the Confederacy. Confederate flags have been pulled down from Confederate war memorials like Fort Sumter. Liberals are demanding that statues of Confederate soldiers be pulled down. Some dirtbags have even gotten a jump on that by vandalizing those statues. Other liberals have started comparing the Confederacy to the Nazis and are demanding that waving a Confederate flag be classified as a hate crime. In Memphis, city leaders are planning to literally dig up the corpse of a Civil War general and his wife. In Congress, we now even have some Republicans agreeing with Democrats who want to dishonor dead Southern soldiers by refusing to allow outside groups to put Confederate flags on their graves once a year.

So we’ve gone from a nice gesture of reconciliation from Republicans in South Carolina to an all-hate campaign waged against southerners so vicious that Democrats are digging up corpses and smearing millions of people across the South as racists.

Americans found it disgusting when ISIS and the Taliban engaged in these Stalinist purges of history, but now liberals are one-upping them. Maybe ISIS should put in a call to Nancy Pelosi and John Lewis to find out how the professional hatemongers do it.

What the Democrats are doing is designed to distract black Americans from the fact that they are doomed to be afflicted with far more than their share of crime, drugs, poverty and mediocre schools as long as they keep voting for Democrats -- and yes, it’s also EVIL in the true sense of the word.

Smearing millions of innocent people as racist, deliberately trying to stir up hatred over race just like the KKK does and trying to shift the blame for the failures of the Democrat Party over to another group of innocent people is not just morally wrong, it’s vile and un-American. It’s also more than a little similar to what Germans were trying to do to Jews in the early thirties. If it breaks Godwin’s Law to mention that, then so be it, because sometimes when the jackboot fits, Democrats should wear it.

Let me finish this by repeating what I said at the beginning. I don’t care about the Confederate flag or the Confederacy, but I do care about millions of Southerners being smeared, dead American soldiers who died defending their homes being attacked, and the disgusting, un-American attempts to purge history. If you’re okay with trying to smear and humiliate so many good and decent people just because they live in the South, then you can kiss my white southern ass.