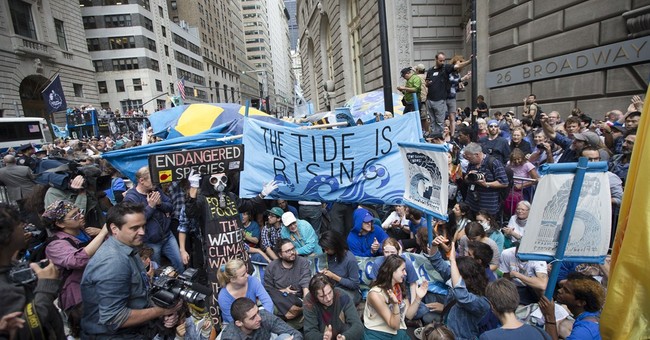 A dream recurred to me as I perused reports of the People’s Climate March last Sunday in New York.

In my dream, Jesse Watters of Fox's "Watters World" is dispatched to cover the People’s Climate March (okay, I can’t get enough of that retro name). As aficionados know, Watters is a sort of goofy guy who shows up in various venues (a beach party, Columbia University, etc.) and asks simple questions. The answers Watters gets reveal alarming depths of ignorance in the populace.

But Jesse wasn’t really needed at the People’s Climate March. The People did pretty without him. Here, for example, is a quote from USA Today’s report:

"I'm totally passionate about our planet and what's happening with our life here," said Heather Snow, 57, a massage therapist from Wilmington, N.C. "The whole Congress, everyone has gone insane, and it's time to end the insanity. I don't know how, I don't know when, but it's got to happen soon. We're running out of time."

And could Watters himself have turned up anything better than this gem from an NBC News profile of Bill McKibben:

While some 25,000 members of the Sierra Club were flocking to the People’s Climate March, other people had more down-to-earth concerns: would President Obama finally get around to making a decision on the Keystone XL pipeline, which would bring us energy from a friendly nation and create an estimated 15,000 jobs for Americans and which has been in limbo for six years, because the president dare not offend his environmentalist base?

As a recent Forbes magazine piece observes, the Keystone pipeline, the environmental impact of which has been excessively studied (and studied again), is “an environmental and economic no-brainer.” Indeed, as an editorial last week in the Wall Street Journal pointed out, the scare tactics used by environmentalists are eerily similar to the charges they hurled at the Trans-Alaska when it was built in the 1970s.

Like the Keystone pipeline, the Trans-Alaska pipeline was repeatedly delayed. But guess what—after it was built the dire warnings from environmentalists proved largely wrong. The authors of the editorial note that the famous Exxon Valdez spill was a tanker accident and not related to the pipeline which “has had an exemplary environmental record.”

And Americans have seen what an energy boom can do for an economy. Fracking, a technological advance that makes it possible to tap heretofore inaccessible energy stores, is the most important factor contributing to North Dakota’s astonishingly low—2.6—unemployment rate. Fracking also could take us closer to the goal of energy independence.

Instead lobbying to ensure that fracking and other exploration measures are pursued in a manner that’s safe for the environment, environmentalists have condemned it altogether and are pulling out the stops to halt it and with it its economic promise. The anti-fracking outcry included a jeremiad from Yoko Ono, speaking from that other Dakota—New York’s exclusive Dakota apartments, where residents don’t have to worry about tacky things like finding employment.

Environmentalists such as the protest-leader McKibben have what seems to be a quasi-religious animus against fossil fuels. President Obama may have delayed the Keystone XL pipeline to the point of straining relations with Canada, and he’s allowed his EPA to move forward on strict new, job-killing regulations on carbon, but this doesn’t cut the mustard for McKibben. As the NBC profile notes, “McKibben thinks the president is part of the problem.” And, McKibben “stabs at President Obama for promising to slow the rise of the oceans, then celebrating America’s gains on Saudi Arabia as the world’s biggest oil producer.”

Most of us are praying that we can develop our oil reserves quickly—and safely!—enough so that we can become more insulated from the turmoil that is enveloping the Middle East. Not the People March crowd—they, after all, have their dogma and aren’t going to bothered with such petty concerns as how we are really going to power the economy.