Benghazi Came Up Short In Showdown With Hillary Clinton 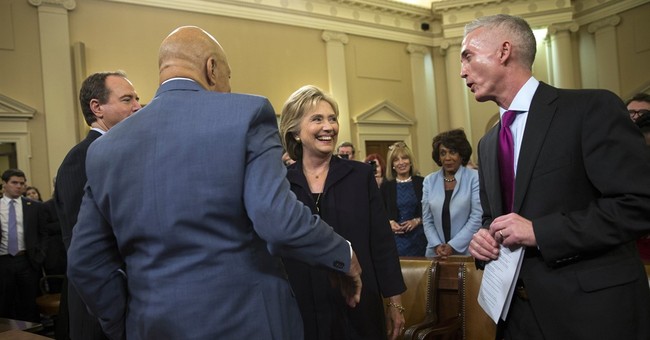 There's a reason Benghazi Committee chairman Rep. Trey Gowdy offered Hillary Clinton the chance to testify in a private, closed hearing. And there's a reason Clinton chose to appear in an open setting, with the whole world watching.

In addition, public hearings can become sidetracked, for everyone to see. If one side decides to pitch a fit and bickering ensues, that is what millions of viewers experience. If the questions go off on a tangent, viewers see that, too. In any event, the purpose of the hearing goes by the wayside.

And that is what took place more than once last week in Clinton's much-watched Benghazi testimony. Republicans presented some new information. One leading Democrat had a tantrum and started a fight with Gowdy. And some Republicans got tangled up in side issues that didn't tell the public much about the core issues at stake in Benghazi. The result was a marathon hearing that didn't accomplish much.

At this point, there is really only one angle on Benghazi: Americans were in danger in a very dangerous country, security was deteriorating, and the State Department and secretary of state did little, and in some cases nothing, to protect them.

As 2012 unfolded, Ambassador Chris Stevens and others in Libya repeatedly told the State Department that threats were increasing. Clinton has said many times that she did not receive those messages from Stevens, that the ambassador followed protocol and sent them to another part of the State Department. But Republicans made the valid point that Clinton friend Sidney Blumenthal had quick, direct access to her -- he knew her secret email address -- while Stevens had to jump up and down waving his hands trying to get his security needs met.

"Can you tell us why security requests from your professionals ... none of those made it to you," Rep. Mike Pompeo, R-Kan., asked Clinton. "But a man who was a friend of yours, who had never been to Libya, didn't know much about it ... every one of those reports that he sent on to you that had to do with situations on the ground in Libya -- those made it to your desk?"

Pompeo and other Republicans cited multiple requests for security, many of them rejected by Clinton's top officials. It might have been instructive to go through a list of those requests, one by one. Did Clinton see this one? That one? Who did? What was done?

It might have been damaging; Clinton had a responsibility to protect those Americans. Instead, after Gowdy made a similar point about Blumenthal's access, the ranking Democrat on the committee, Rep. Elijah Cummings of Maryland, jumped in.

"I move that we put into the record the entire transcript of Sidney Blumenthal," Cummings said. "We're going to release the emails; let's do the transcript. That way the world can see it."

Another Democrat chimed in: "I second that motion."

"The motion has been seconded," said Cummings.

"Well, we're not going to take that up at a hearing," said Gowdy.

Of course the transcript wasn't the point. It was all a distraction. The point was to throw the proceedings off track, which Cummings accomplished quite nicely.

Republicans were capable of throwing themselves off track, too, which is what they did with a near-obsession with Blumenthal. His name was mentioned 60 times -- before the first questioner had even finished.

The committee did find some good nuggets about the talking points that the administration used after the attack. Clinton, President Obama and other administration officials called the attack a spontaneous reaction to an anti-Muslim Internet video, when in fact they knew from the first minutes that it was a planned terrorist assault.

The committee uncovered evidence that on the evening of the attack, Clinton sent an email to daughter Chelsea explaining that the Americans had been killed by "an al-Qaida-like group." And the day after the attack, Clinton told the Egyptian prime minister, "We know that the attack in Libya had nothing to do with the film."

So a hearing billed as an epic, High Noon-style confrontation -- granted, the hype came from the media, not Republican committee members themselves -- instead turned out to be a somewhat interesting look at a few limited aspects of the Benghazi affair. In other words, no big deal. And that is very, very good news for Hillary Clinton.