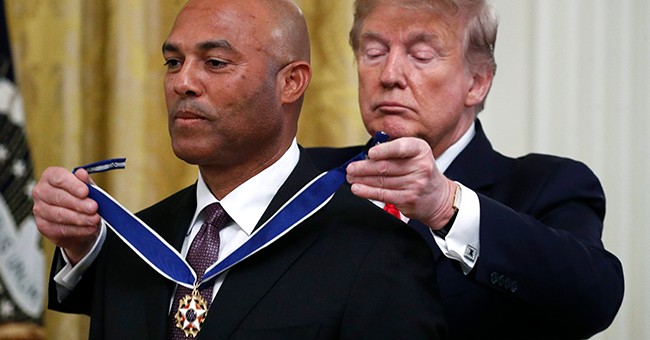 President Donald J. Trump knows a winner when he sees one. So, for the president's choice for the 2019 Medal of Freedom recipient, it was a no brainer. Enter Sandman.

"This afternoon at the @WhiteHouse, it was my great honor to present our nation’s highest civilian honor, the Presidential Medal of Freedom, to American baseball legend  @MarianoRivera. Congratulations on this extraordinary achievement, Mo!" the president tweeted.

This afternoon at the @WhiteHouse, it was my great honor to present our nation’s highest civilian honor, the Presidential Medal of Freedom, to American baseball legend @MarianoRivera. Congratulations on this extraordinary achievement, Mo! https://t.co/nzOeqFNb3C

Rivera was born in Panama City, Panama. He became a United States citizen in October 2015. Baseball fans across America recognize Metallica's song, Enter Sandman, as Rivera's walkout song that played each time he took the mound. On Monday, the president incorporated this iconic anthem into the Presidential Medal of Freedom ceremony.

They played @Metallica in the @WhiteHouse today.@realDonaldTrump walked out with @MarianoRivera to Metallica's "Enter Sandman" like Rivera did so many times during his 19-year @MLB career.

Baseball's “greatest relief pitcher of all time” Mariano Rivera just received the Presidential Medal of Freedom "for his commitment to strengthening America's communities” off the field pic.twitter.com/oxjcfyFuSz

Rivera is a devout Christian. In his  2019 Hall of Fame acceptance speech, he professed his faith and thanked Jesus Christ for talent.

"I want to start this by thanking my good Lord and Savior, Jesus Christ,” Rivera said in January, "for giving me the talent and the blessing, and opening doors I could never close, that no man could close. He has given us a beautiful day today, and it’s amazing. So thank You Lord for everything You have done in my life."

While accepting the Medal of Freedom, he said he was "proud to be an American" and thanked President Trump for the honor. Rivera arguably the greatest relief pitcher of all tie, and has inspired countless of Americans on and off the field.