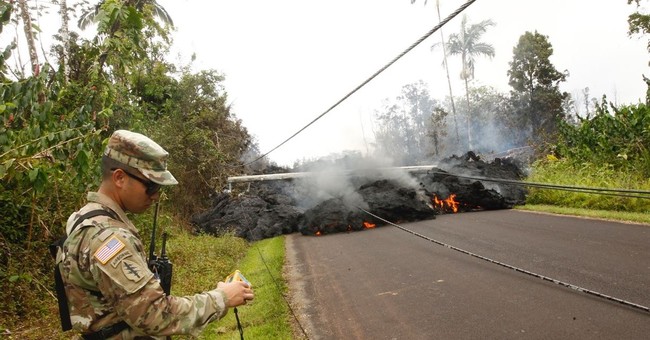 President Donald J. Trump approved the Hawaii governor's request declaring the state a “major disaster” late Friday night ahead of warnings that continuing volcanic eruptions could cause immense damage to the islands and its residents.

According to the Federal Emergency Management Agency’s website, “The President can declare a major disaster for any natural event…that the President determines has caused damage of such severity that it is beyond the combined capabilities of state and local governments to respond.” This opens up  a wide range of financial assistance programs to help aid recovery and rescue missions.

On May 3rd, the Kilauea volcano erupted forcing nearly 2,000 people out of their homes and destroying dozens of buildings. There are 15 vents that could spew more lava at any time, but there is also threat of toxic gas such as sulphur dioxide which can lead to acid rain, lung damage, and other bodily harm.

President Trump approved Hawaii Gov. David Igle's request for disaster relief aid less than 24 hours after the state asked for the declaration. Igle's has office has already mapped out plans for a mass evacuation should Kilauea explode. The governor's office reported that the expected cost will be at least $2.9 million.