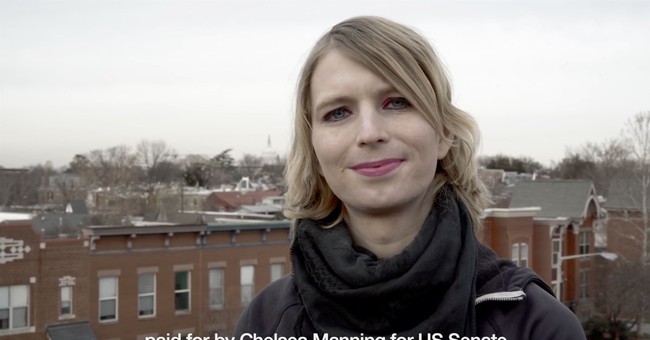 Chelsea Manning, convicted traitor and transgender activist, confirmed Sunday morning that she will be running for the U.S. Senate, hoping to earn the Maryland Democratic nomination in the 2018 election.

In September, Manning caused controversy after Harvard University rescinded her inivtation for a prestigious Harvard Fellow position. On the left, Manning is regaled in some circles a heroic whistle blower. The Federalist's Senior Writer and co-author of End of Discussion, Mary Katharine Ham, wrote at the time that “[Manning] was found guilty in 2010 on 20 of 22 counts in Seven years into a 35-year sentence, Manning received a commutation from President Obama. During the trial and sentencing, Manning’s lawyers blamed Manning’s gender dysphoria for leading to his crimes, and in 2016 then-Bradley Manning declared in a commutation application, “I am Chelsea Manning, a proud woman who is transgender and who, through this application, is respectfully requesting a first chance at life.” Since then, Manning has been feted by elite society as a symbol of trans heroism and overcoming hardship.”

Today, she released a campaign video on Twitter after media speculation that she was considering a run for the  U.S. Senate. In it, Manning is seen looking off into the distance, describing a system of government engulfed in “fear”, “suppression”, and “hate.” The video also features Manning's trademark use of peculiar emojis.

“We need to stop expecting that our systems will fix themselves . . . we need to challenge them at every level. We need to fix this,” Manning says. “You’re damn right we got this,” she ends her video.

Guy Benson, who was also honored with Harvard Fellow position, wrote in September why Manning did not deserve that award, let alone the privilege of serving in the Senate. "In light of the nature of her established treachery, Manning's invitation was highly questionable in the first place; her designation as a Harvard fellow was indefensible.  Those who engage in anti-American, life-endangering espionage should be in prison, not in positions of honor at Ivy League institutions.  Thanks to her identity politics-driven reprieve from President Obama, Manning now walks free, and her voice will not be stifled on campus in the coming weeks.  That's fine, but make no mistake: She is no hero.  She is the opposite of a hero.  She should be prodded and challenged as such in an open forum.  I'll leave you with Manning's juvenile and preposterous response to the effective demotion, which underscores how she is a reactionary moron in addition to being a traitor: