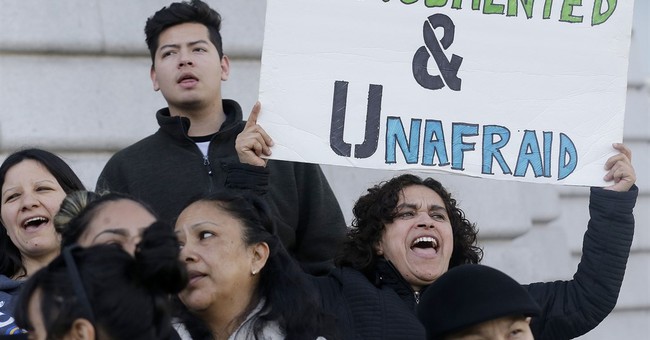 Democrats cheered Friday when a Federal judge placed an injunction on the Department of Justice, blocking Attorney General Jeff Sessions from withholding federal dollars from Sanctuary Cities such as Chicago. While in California the state legislature moved one step closer to deeming the entire state a “Sanctuary State”, requiring police forces to limit cooperation with federal immigration authorities.

Earlier this year, AG Sessions threatened to with hold federal dollars from Sanctuary Cities that refused to enforce simple laws such as reporting the immigration status of suspects in custody to immigrations agents. The city of Chicago sued the Justice Department, claiming that the order from Sessions violated an individual’s Fourth Amendment right to not be held in custody without being charged with a crime. Chicago also argued that this provision infringed upon separation of powers principles, in other words the city argued in favor of States’ rights.

Chicago refuses to report illegal aliens because not doing so “promotes cooperation between local law enforcement and immigrant communities.”

Indeed, many in the legislature of California want this policy for the entire state. On Friday, California’s state Assembly passed a bill deeming the state “Sanctuary State.” This bill drastically decreases required police cooperation with federal immigration authorities.

Yet, not even a month ago in San Francisco, another California citizen died at the hands of an illegal immigrant who federal authorities were tracking for deportation. 18 year old Erick Garcia-Pineda was detained by authorities in December of 2016, but released on a judge’s order.  As part of the judge’s order, Garcia-Pineda was required in April to wear an ankle tracking bracelet while authorities reviewed his case. He also was required to check in with immigration officials.

But on August 19th, an ICE contractor received an ankle bracelet tampering notification from Garcia-Pineda's device. Authorities could not find the illegal alien, but local sheriffs arrested the man on September 3rd on misdemeanor battery charges that occurred that day. Deputy officials refused to listen to ICE’s request and released him from jail that day.

Several days later, the illegal immigrant was arrested in the connection of an August 15th killing. Authorities say that he killed 23 year old Abel Esquivel during a robbery, with a stolen police weapon.

The unfortunate death of Kate Steinle at the hands of an illegal immigrant in San Francisco several years ago sparked Congress into action. This past July, they passed Kate's law which mandates a minimum five-year prison sentence for anyone who reenters the country illegally at least twice after being deported.

Still, Federal judges continue to overrule the Constitution while State legislatures place illegal immigrants before American citizens. The Department of Justice has not indicated any motion to appeal the injunction and California representatives seem oblivious to the havoc in their communities caused by illegal aliens.