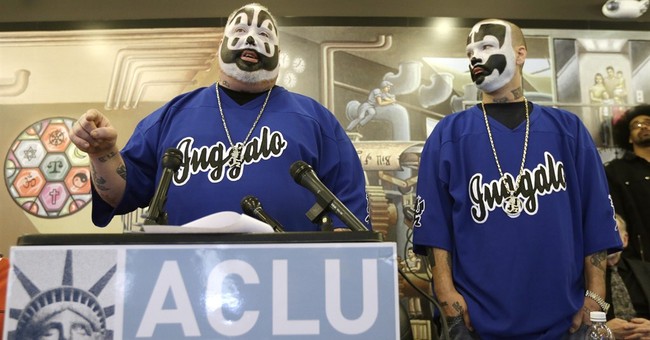 Saturday will be a bizarre day for the nation’s capital and Richmond, VA. While differing protests is nothing new, these three rallies pique curiosity for a myriad of reasons.

In the heart of Washington, DC, Trump supporters will participate in the “Mother of All Rallies", a play off the name given to the United States' largest non-nuclear weapon known as the "Mother of All Bombs." The event is “about protecting and supporting President Donald Trump, protecting our Constitution, and protecting our flag and all that it stands for” according to their Facebook page. “The only flag that unifies us all is the American flag”, claims their website and makes clear that Confederate, Republican, Democrat, or any other kind of flag will not be tolerated.

Simultaneously, Insane Clown Posse (ICP) aficionados will also be touting their cultural contributions to America. Juggalos, the affectionate name given to fans of the eccentric if not totally absurd band known as ICP, are coming D.C. to make a statement. The purpose of this gathering is to “demonstrate to the FBI and the world that Juggalos are not violent, and rather are a "family" instead of a "gang, public menace, [or] cult."

While the two groups truly have no real reason to oppose one another, many are predicting the black and white face painted clowns marching upon the District of Columbia will present a peculiar background in contrast to the American flag #MAGA bearing Trump supporters.

Still, to the South in Richmond, neo-confederate perennial losers will be rallying in support of second place participation trophies everywhere. CSA II: The New Confederate States of America, is the group that organized the “Protect the General Robert E. Lee Monument Rally." They claim their goal is not to be racist nor promote hate, but simply protect their heritage. They have told reporters they have no idea how many will attend, but expect big numbers.

Earlier in August, the “Unite the Right” rally in Charlottesville, Virginia left one deadafter a white nationalist terrorist rammed his car into a crowd of counter protestors. In response to that, Richmond Mayor Levar Stoney issued the following statement to CSA II: “if you do not respect our city, law enforcement will lock you up...It's only been one month since Heather Heyer was killed in Charlottesville. Have you no sensibility?"

In light of that recent tragic event, may we pray all of these groups exercise their freedom of speech without the use of violence.