Awful: One Dead After Car Plows Into Counter Demonstrators At White Nationalist Rally in Virginia 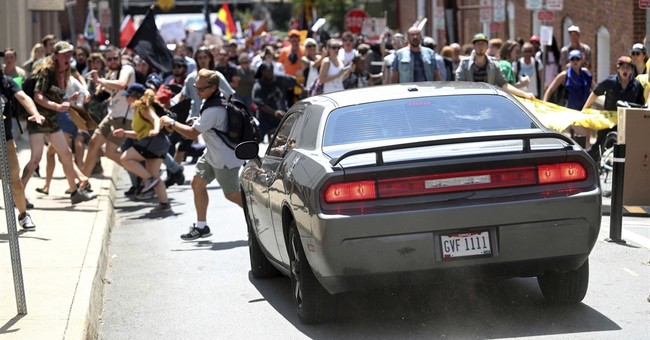 UPDATE: Two troopers have died in Charlottesville after a VA State Police helicopter crashed near the protest site.

Jen has been covering the chaos in Charlottesville, Virginia, where alt-right activists descended into the city to protest the removal of a Robert E. Lee statue. The event began last night with a night rally and plenty of torches.

Today, violent clashes broke out between counter protesters, which led to Gov. Terry McAuliffe declaring a state of emergency. Over 1,000 police were deployed to try and keep law and order. President Trump and other congressional leaders have issues statements of condemnation of the bigotry and violence that has occurred.  Attorney General Jeff Sessions, contrary to claims by liberals, has also condemned the violence as “contrary to American values.”

At least 1,000 officers have been deployed to #Charlottesville. https://t.co/7V8OZqSL4Y pic.twitter.com/EJ4sAdpLTi

BREAKING: Hospital official says one dead, 19 injured after car plows into a group of protesters in downtown Charlottesville, Va.

At least one person was killed and several others were injured Saturday when a car rammed into a group of counter-protesters during the “Unite the Right” rally in Charlottesville, Va.

Charlottesville Mayor Mike Signer tweeted that he was "heartbroken that a life has been lost here" and urged "all people of good will [to] go home."

The crash occurred approximately two hours after clashes in which hundreds of people screamed, chanted, threw punches, hurled water bottles and unleashed chemical sprays on each other ahead of the scheduled noon demonstration.

BREAKING: State official says driver of car that plowed into group of protesters in Charlottesville, Va., is in custody

BREAKING: Trump condemns "this egregious display of hatred, bigotry and violence on many sides" in Virginia.

BREAKING: Trump on Virginia: "What is vital now is a swift restoration of law and order and the protection of innocent lives."

BREAKING: Trump says Americans must come together "with love for our nation ... and true affection for each other."

Brennan Gilmore, the former chief of staff to ex-Rep. Tom Perriello (D-VA), took video of the incident. It’s quite ghastly.

Video of car hitting anti-racist protestors. Let there be no confusion: this was deliberate terrorism. My prayers with victims. Stay home. pic.twitter.com/MUOZs71Pf4