Liberals: Saying 'Mother Of All Bombs' Is 'The Epitome Of Lethal Patriarchy' (Or This Is Why You Lost Part XXVI) 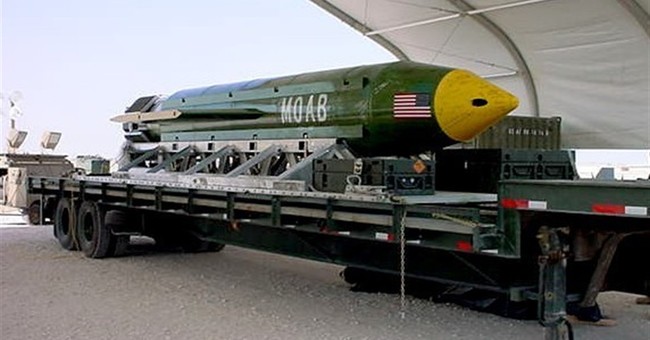 Well, the liberals are at it again with their political correctness nonsense. This time they took aim at the 22,000-lb Massive Ordnance Air Blast (aka the Mother of All Bombs), which progressives found offensive. While never been used in the field, it’s been in service since the Bush administration, so this outrage seems a bit delayed. Second, no one really cares that this bomb was gendered. It’s these politically correct antics that will continue to make the Left look abjectly insane and unpalatable. It’s part of the speech codes, the lectures on so-called privilege, and safe space authoritarian ethos that only emboldened the forces the helped elect Donald Trump as the 45th president of the United States. A lot may not have liked Trump, but after being lectured to, among other things, about how calling this 22,000-lb bomb is an example of “lethal patriarchy,” you would vote for the candidate who shunned this nonsense. And believe me mother of all bombs is a much friendlier term than what we really could call this bomb, give the conflict we’re in with radical Islamic terrorists.

I really want the media to STOP using the term "mother of all bombs". Offensive.

It's grotesque to call a killing device, the “Mother of All Bombs.” The #MOAB is the epitome of lethal patriarchy.

The U.S. dropped a MOAB on ISIS fighters in Afghanistan, killing nearly 100 of them last week. Some saw this as sending a message to North Korea’s Kim Jong-un, who was making preparations for the 105th anniversary of the country’s founder, Kim Il Sung, which also included a possible nuclear weapons test. That didn’t happen. A missile test was conducted on Sunday, but it blew up on the platform.