Nancy Shies Away From Saying If Biden Will Run in 2024 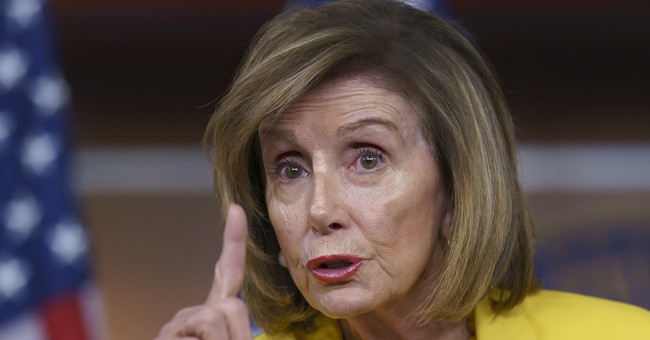 Earlier this week, CBS News aired the "60 Minutes" interview with President Joe Biden in which he made many eyebrow raising remarks, including on whether he'll run for re-election in 2024. "Look, my intention as I said to begin with is that I would run again," Biden told host Scott Pelley. "But it's just an intention. But is it a firm decision that I run again? That remains to be seen."

House Speaker Nancy Pelosi (D-CA) stood by Biden's non-answer during her Thursday press conference when asked by a reporter if Biden should run again.

Pelosi is asked if Biden should run again:

"President Biden is the president of the United States. He did a great service to our country. He defeated Donald Trump...I'm not going into politics of whether the president should run or not." pic.twitter.com/c5jhUUKCXG

Pelosi didn't directly answer the question until she had sung Biden's praises for defeating former President Donald Trump in the 2020 election. "President Biden is the president of the United States. He did a great service to our country," she claimed. It turned out to be just the fact that he got elected. "He defeated Donald Trump, let's not forget that. If you care about the air we breathe, the water we drink, the education of our children, jobs for our, our, um, families, pensions for their seniors, any subject you can name," she ranted off before abruptly mentioning "I'm not going into politics of whether the president should run or not."

Fox News' "The Story" with Martha MacCallum highlighted remarks from Democrats since March of last year, including from Biden himself, as well as Vice President Kamala Harris, and current and former White House Press Secretaries Karine Jean-Pierre and Jen Psaki. Such remarks claimed there will be a Biden-Harris ticket once more come 2024.

A close Biden ally, Sen. Chris Coons (D-DE), is also referenced in an Axios piece from Tuesday pointing out that the "outcome of the midterm elections will be a fairly strong indication of what the issues are that will shape the ground for the 2024 presidential." Biden may not announce a decision until the middle of next year.

Ari Fleischer, who served as the White House Press Secretary during the George W. Bush administration, pointed out during a segment on "The Story" that Republicans would love nothing more than to see that ticket again, given Biden's old age and how easy he would be to beat. He agreed that Coons had a good point, especially if Democrats perform poorly in these upcoming midterms, now just a month and a half away.

It's worth reminding that whether or not Biden does run again, and multiple polls show that even fellow Democrats want someone else as the nominee, there were top Democrats who swore up and down that he was running, including DNC Chairman Jaime Harrison and former Rep. Cedric Richmond (D-LA), who had also served as a senior adviser to the president.

Further, some Democrats who claimed Biden wasn't running were excoriated, like Rep. Carolyn Maloney (D-NY), who kept flip-flopping on whether or not she thought Biden was running again and if he should. She lost her primary last month against fellow incumbent Rep. Jerry Nadler (D-NY), due to redrawn districts.

That wasn't the only way in which Pelosi stood by Biden, though. Pelosi even sang Biden's praises when it comes to the crisis at the border. This is almost as outrageous as Jean-Pierre blaming such a crisis on the Trump administration.

Our friends at Twitchy highlighted some of the best responses to that truly hot take.

This out gaslighting doesn't produce the response she thinks it does.

I think she lives in an alternate reality

Take nasty Nancy to the border and leave her there, on her own. She can tell all the invaders how proud she is.