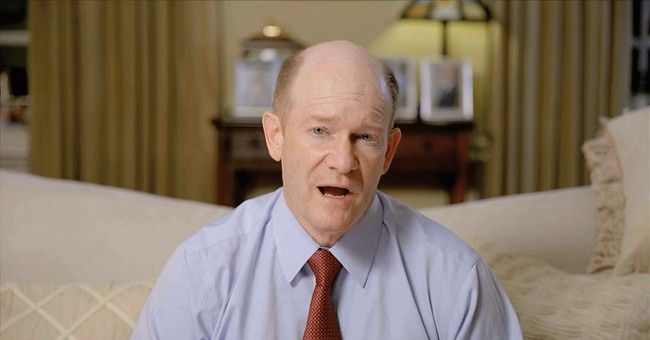 Last Wednesday, 26-year-old Nicholas John Roske of Simi Valley, California was arrested near Justice Brett Kavanaugh's house. Conserative media have covered it, but it's been buried by the mainstream media. This includes the Sunday shows, which aired just four days after the suspect was arrested.

Grand total: 1 hour 33 minutes and 7 seconds spent on the January 6th hearings on the Sunday shows.

ABC News' "This Week," CBS News' "Face the Nation," NBC News' "Meet the Press," and CNN's "State of the Union" combined covered the January 6 select committee hearings for over an hour and a half, yet stunningly didn't spend any time on how someone told police and a 911 operator that he wanted to murder a sitting U.S. Supreme Court justice.

It turns out it's possible to cover both of those topics, as "Fox News Sunday" did. Guest anchor Bret Baier also spoke with Sen. Chris Coons (D-DE) about legislation that would better protect the justices. Coons had co-sponsored such legislation with Sen. John Cornyn (R-TX) that passed by unanimous consent, but it's been held up in the House by Speaker Nancy Pelosi (D-CA) who could not seem more disinterested if she tried to be, judging from her own refusal to take up the bill for a vote and her remarks during last Thursday's press conference.

As Madeline covered on Friday, Pelosi expects the House to vote on the bill this week. The speaker tried to claim that it was an issue with getting the language from the Senate, and left it for House Majority Leader Steny Hoyer (D-MD) to deal with.

It's crucial to remind, though, that Democrats in the House also want to protect the leaker who released the draft opinion to the public showing that the Court is looking to overturn Roe  in the Dobbs v. Jackson decision. Since the leak, there has been an uptick in vandalism and even violence against pro-life organizations, all while the White House and Democrats largely remain silent.

Democrat Senator Chris Coons won't say if he thinks those illegally protesting outside the homes of Supreme Court justices should be arrested.

"As an elected official, I've certainly had protests out front of my house." pic.twitter.com/3AlTNPuhbS

One might hope that Sen. Coons would be reasonable, yet the senator demurred when asked about if protesters outside justices' homes should be arrested. He even went with the same response that Senate Majority Leader Chuck Schumer (D-NY) did, by pointing out that "as an elected official, I've certainly had protests out front of my house. Many of us have who serve in Congress and other elected offices."

Coons also stuck with the pro-abortion narrative that "there will be understandable anger across the nation" if the Court does overturn Roe v. Wade as revealed in the leaked draft opinion of Dobbs v. Jackson.

When offered the chance to clarify that he's not saying don't arrest protesters, Sen. Coons told Baier that "I didn't say don't arrest protesters. I'm simply saying that all appropriate action should be taken to ensure the safety of the Supreme Court justices." He went on to say that "I'm not going to say this protester or that protester ought to be arrested. I just think that that's a judgment call to be made by law enforcement, not by a senator on a Sunday show."

Coons, like a good soldier, also defended how Schumer, then minority leader, incited violence against Justices Kavanaugh and Neil Gorsuch, the clip of which Baier played on air.

"What Senator Schumer was saying was that he was upset. He was alarmed, he was concerned at the prospect that justices would reverse decades of a well-established fundamental constitutional right in our country. What he did not say was let's go attack them," Coons claimed.

On the steps of the Supreme Court, Chuck Schumer said of Justices Gorsuch and Kavanaugh: "You have released the whirlwind and you will pay the price. You won't know what hit you."

Coons and Baier also discussed January 6, which Coons tried to tie the conversation to, including when Baier pointed out that President Joe Biden has still not directly addressed or condemned the murder plot. As a way to promote Rep. Liz Cheney's (R-WY) remarks during the hearing, Sen. Coons said that "it's important that we remember there are threats of political violence of many kinds and types."

Tober also highlighted some of the other coverage news channels went with instead of covering the murder plot, such as a glowing ABC News profile on White House Press Secretary Karine Jean-Pierre being the first openly LGBT press secretary.