Republicans Continue to Draw Contrast Between Democrats, Including with Hispanic Outreach 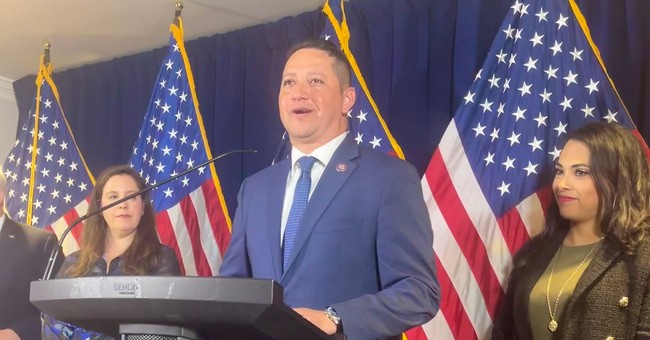 This article has been updated to include more information on the resolution honoring Bishop Evans.

A theme throughout the launch was to draw a distinction between Republicans and Democrats as it comes to Hispanic outreach. While Republicans acknowledge that Hispanics tend to vote Democratic, it's worth noting that this is in many ways in the context of Democrats taking such a voting bloc for granted. For Republicans, it's about running on the issues.

In his remarks, Leader McCarthy quoted Rep. Sean Patrick Maloney (D-NY), who has the arduous task in defending the Democratic majority in the U.S. House of Representatives during an election cycle his party is likely expected to lose.

McCarthy called it "kind of ironic" that Maloney summed it up so well when he was quoted by The Washington Post, in an analysis of the midterm elections noting that history favors the Republican Party in this race.

That report from The Washington Post acknowledged Maloney's remarks were "blunt."

In speaking with Townhall after the event, Rep. Gonzales responded that he does think "the Democratic Party are going to keep running the same plan they've been on, which is a failed plan" and is optimistic that the "Republican Party is going to win over the Hispanic vote."

Mayra Flores, who is running for a currently vacant seat previously held by Democrat Filemon Vela, also spoke. Flores, the wife of a Border Patrol agent, has been endorsed by Stefanik's E-PAC and is currently leading in her race, according to internal polling.

At Hispanic Leadership Trust event, candidate @MayraFlores2022 says her father is lifelong Democrat, but raised her with values to be Republican. Her values are not worth trading for party. She also emphasized GOP finally reaching out to communities they haven’t before. pic.twitter.com/PakigkIDcr

Flores spoke of how her father, despite being a lifelong Democrat, instilled conservative values in her that have made her a Republican. She told her father that "I'm just not willing to put the values that you raised me with aside for a political party," with an emphasis on "putting God and family first."

Not only does the Republican Party believe they can do it with Flores, they have done it before, with Rep. Gonzales, who spoke glowingly of McCarthy and Scalise and of the support they offered him in his successful run for Congress. McCarthy said that while Gonzales' election victory was going to be considered a difficult one, Gonzales wasn't concerned, as he was going to make his campaign about issues.

Another consistent emphasis was that Republicans are engaging and invested in outreach in a way that they haven't done so before, by going into areas where voters may not have met a Republican until now.

Republicans not only have been experiencing what Rep. Stefanik referred to as "historic support" among the Hispanic community, but President Joe Biden's ratings are deeply in the water, even and including the Hispanic community, as I highlighted last month with the release of a Quinnipiac poll showing that just 26 percent of Hispanics approve of Biden, while 54 percent disapprove, and 20 percent have no opinion.

When it comes to the southern border, which is in Gonzales' district, perhaps there is no other indication that more clearly illustrates how out of touch this administration is than the lack of a reaction to the death of a Texas national guardsman.

Last month, 22-year-old Bishop Evans died saving illegal immigrants who were drowning in the Rio Grande, who were placed in custody. The two men were revealed to be involved in the drug trafficking. After a four days search, Evans' body was recovered. He was buried a short time later.

Jen Psaki, then the White House Press Secretary, was asked about Evans during the April 25 press briefing, and did not mention him before then.

"Of course we are mourning the loss of his life and we are grateful for the work of every national guardsman," she said, before shrugging off any responsibility. "I would note that the National Guard work for the states and so he is an employee of the Texas National Guard and his efforts and his operation were directed by there, not by the federal government in this effort- in this apparatus."

Not only has the administration not offered further condolences, but it seems Evans has been completely forgotten. For as Rep. Gonzales revealed to Townhall, he had to remind Transportation Secretary Pete Buttigieg who Evans even was. Gonzales has a resolution to honor Evans, that was introduced on April 28 by Gonzales, along with McCarthy, Stefanik, and 30 of their colleagues.

"The whole country should be talking about Specialist Bishop Evans" said Gonzales in his floor speech. "The man is a hero. There are many men and women that serve that are just like this. When the time comes, it’s a fight or flight moment and they are rushing to the fire, not away from it… I want to celebrate this man’s life, what he stands for and everything that he’s done. He is a patriot who served our country. When duty called, he answered the call."

The launch of the HLT comes the same day as the RNC released remarks on the border crisis, in light of the announcement that April saw the most border encounters in the history of DHS. The numbers are a 30 percent increase from last April, and a whopping 384 percent increase from the average number of April apprehensions from the Trump administration.

"It’s official, Biden created the worst crisis at the border on record – April border encounters are the highest ever recorded by the Department of Homeland Security in a single month. Thanks to Biden’s open borders agenda and his decision to end Title 42, drug smugglers and human traffickers will continue to thrive and American communities are less safe as a result," said RNC Chairwoman Ronna McDaniel.

The Biden administration is set to put an end to Title 42 on May 23, despite how even fellow Democrats are raising the alarm. A legal case is pending that Townhall is closely monitoring.