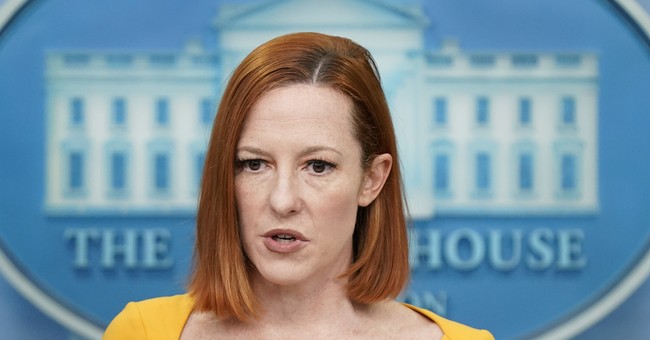 At the top of her briefing, Psaki failed to offer any comment on the tragic death of SPC Evans until she was asked point-blank if the White House had anything to say about the incident that saw the heroic guardsman dive into the Rio Grande River to save flailing illegal border crossers who were allegedly drug smugglers, losing his own life as a result.

After waiting some four days to offer any statement from the White House or the President of the United States, Ken Psaki — again, only when pressed — finally commented the death of SPC Evans. But, as usual from the Biden White House, there was zero admission of responsibility or expression of regret that the border has devolved into a crisis on multiple levels on Biden's watch.

"Of course we are mourning the loss of his life and we are grateful for the work of every national guardsman," Psaki began before immediately blaming someone else — conveniently the red state of Texas. "I would note that the National Guard work for the states and so he is an employee of the Texas National Guard and his efforts and his operation were directed by there, not by the federal government in this effort- in this apparatus," Psaki claimed.

“Of course we are mourning the loss of his life.”

It’s now day four. This is the first time the White House has said anything about a National Guardsman losing his life, other than noting Biden was briefed. Biden has not issued a direct statement. No responsibility for crisis. https://t.co/GrgAqjrJcR

Psaki, the same Biden official who used the White House podium to smear the reputations of other heroic mounted border agents who did literally nothing wrong while fighting Biden's border crisis, didn't even say SPC Evans' name.

It's an answer as shameless as it is unsurprising. Despite repeated claims from Biden that "the buck" stops with him, he has sought to deny responsibility for a laundry list of crises that have made the United States a weaker, more dangerous, and more expensive place to live. He denied blame for his debacle of an Afghanistan withdrawal that saw 13 American service members lose their lives in an ISIS-K suicide bombing. He claimed inflation was transitory, until it wasn't, and then he blamed Putin and greedy CEOs. And now his border crisis has claimed the life of a heroic guardsman — in addition to an increasing number of foreign nationals attempting to illegally migrate to the United States — and again, the White House denies any responsibility.

Katie, Guy, and Julio are embedded along the U.S.-Mexico border this week with Texas' Operation Lone Star and have seen first-hand again the crisis created by President Biden's open-border policies. Policies that are the reason Texas' border security efforts are necessary and SPC Evans was along the Rio Grande in the first place, as Julio highlighted.

And he was there in the first place because the Biden admin caused the current crisis by refusing to secure the border. https://t.co/9DJRYfRgHj

Texas has been desperately trying to shore up its international border with Mexico amid the historic surge of illegal immigrant apprehensions and "got-aways" that have occurred under the Biden administration, but it hasn't yet been enough to stop illegal border crossings as the Biden administration continues to create a lawless no man's land along the U.S. Mexico border.

24 miles of this fencing did not exist less than a year ago. Texas has been doing what it can, in the face of federal failure, caused by policy at the top. https://t.co/mR1V5NvokY

What Guy, Katie, and Julio are witnessing this week along the southern border is a situation that's only going to get worse when Title 42 is terminated, a move that President Biden continues to barrel toward on May 23. In Monday's briefing, Psaki also noted that the Department of Homeland Security — headed up by Alejandro Mayorkas who has privately expressed worry about how the U.S. will deal with a post-Title 42 surge of migrants — has "projected that there could be an increase in people coming to the border." Psaki assured reporters that there's a "multi-part plan...to prepare for that." So when the border crisis gets even worse in the wake of Title 42 and the Biden administration inevitably, again, denies responsibility, remember the White House knew a surge was coming and claimed to have planned for it.