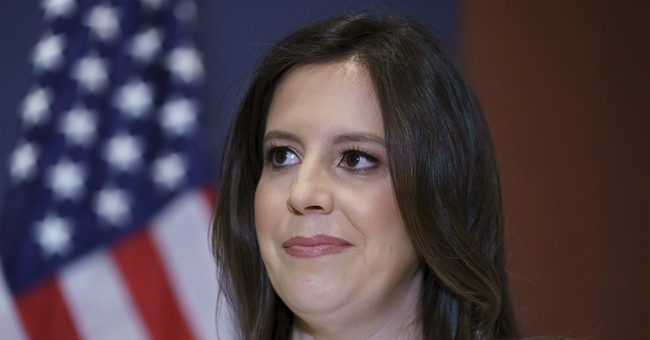 On Friday, "#EliseStarvefanik" trended on Twitter, a cruel take on the name of Rep. Elise Stefanik (R-NY), who has served for a year now as the chair of the House Republican Conference.

Earlier on Friday morning, the congresswoman shared an article published on Thursday from Katie, "The Biden Administration Is Shipping Pallets of Baby Formula to the Border." In her tweet, Stefanik raised concerns to do with how "Joe Biden continues to put America LAST," and highlighted how Americans are suffering from the #BidenBorderCrisis."

American mothers and their babies shouldn’t suffer because of the #BidenBorderCrisis.https://t.co/zgWHz84lkZ

The mainstream media, via The Washington Post's Glenn Kessler, in a fact-check from Thursday night, referred to such concerns as "faux outrage."

Stefanik's Democratic colleagues in the House also piled on, with Reps. Eric Swalwell (CA) and Ruben Gallego (AZ) seeming to lead the way for getting the hashtag and harsh charge to trend.

If you are in Congress and propose starving babies to death you deserve to have your name trend. #EliseStarvefanik https://t.co/RuVppxRbPZ

Your plan #EliseStarvefanik is to starve babies. You have no excuse so now you’re just lashing out. Picking on babies for political gain is so low and trashy. https://t.co/ifNEoN6Tjy

They can't go out, drive around and shop for formula while in immigration custody. #EliseStarvefanik doesn't care, she wants to let their babies starve to make a point (which is that only white American babies count). What a horrid bitch. Fuck the @GOP https://t.co/NsphKoNJtj

I am the father of a very cute baby who currently drinks formula and I can’t believe I have to clarify that I’m in the don’t-let-babies-starve-in-US-custody camp.

Rep. Stefanik is herself Congress' newest mom, which many Twitter users even used to further attack her.

Elise Stefanik has a birth announcement for her own child pinned to the top of her Twitter page while she's demanding that the White House deny baby formula to migrant children. That's why people are calling her #EliseStarvefanik.

Despite the hashtag, and other such cruel points people would make, it is unfair to assume the congresswoman wants to let anyone starve. What they fail to address is that there has been a shortage and issue of prioritization.

Not only is Stefanik not calling for anyone to starve, she has been warning about this issue and has been since February as she's called on the Biden administration to address the issue and come up with a plan, which they have failed to do.

Waiting months to recall baby formula while infants were hospitalized is unacceptable.

This may have been largely averted if the @US_FDA acted swiftly after initial reports of illness.

Back in February @RepStefanik was demanding that the Biden admin develop a plan to avoid this baby formula shortage.

Joe Biden did NOTHING and now Americans are struggling to find baby formula. https://t.co/YQu89DLBes https://t.co/WvJRH57jDN

Yesterday, Jen Psaki placed blame for the shortage on a recall that happened in February, and noted that the Biden administration has been working "for weeks now" on this issue. https://t.co/qUeJUvqiWF

FDA should’ve developed a plan months ago. Why was there a 44-day delay on inspections of the Sturgis Abbott facility when the FDA knew there were consumer complaints about illness as far back as September 2021? @DrCaliff_FDA https://t.co/Uua5Mr7wcm

House Democrats are going to hold a hearing on Biden’s Baby Formula Shortage in 12 DAYS.

And, on Thursday, Stefanik, as the conference chair, joined other House Republicans in calling for the president to address the issue.

"I cannot think of a more harrowing crisis for parents than desperately trying to find food for their newborn baby...When Joe Biden’s White House was asked about the shortage, they laughed, shameful. Make no mistake, the American people do not find this funny." - @RepStefanik pic.twitter.com/MhZzVxijtV

Stefanik was not willing to take the accusation lightly, though, especially when it came from the likes of those affiliated with the Lincoln Project with various tweets and retweets by co-founder Rick Wilson as it applied to Rep. Gallego's tweets tweets of his own.

The cruelty is the point https://t.co/YSp8gwKcaa

If you think photos of flag-draped coffins is bad press, imagine row after row of infant coffins.

"The White House, House Democrats, and usual pedophile grifters are so out of touch with the American people that rather than present any plan or urgency to address the nationwide baby formula crisis, they double down on sending pallets of formula to the southern border. Joe Biden has no plan," Stefanik said.

Wilson, in his stunning move of immaturity, responded by bringing Rep. Jim Jordan (R-OH) into it as it applies to the "usual pedophile grifters."

Why are you bringing Jim Jordan into this? https://t.co/BADuNr24n6

As Townhall has been highlighting all throughout this week, the Biden administration has been prioritizing baby formula for illegal immigrants, while American families go without, despite how Republicans highlighted the issue months before. Concerns about the lack of supplies and failure to first prioritize Americans has led some, including Hillary Clinton, to claim Republicans and the pro-life movement want to let babies die.

The Biden administration has responded with a non-response, though, with the president dragging his feet to address it on account of how "it's on the front of every newspaper."

A reporter read out Rep. Stefanik's tweet during outgoing White House Press Secretary Jen Psaki's last press conference. Psaki, claiming that the Biden administration "like[s] facts," focused on how CPD is following the Flores Settlement and that this is "morally the right thing to do," rather than addressing the shortages American families are facing as a result.

Out of touch & unacceptable.

The White House doubles down on having absolutely NO plan for how to feed America’s babies who are suffering from a formula shortage nationwide while pallets are being sent to Biden’s open southern border.#BidenBorderCrisis #BidenBabyFormulaCrisis https://t.co/XXUYizxKc9

My response to Jen Psaki’s out-of-touch White House briefing today highlighting the abject failure of Joe Biden to have any plan to address the baby formula crisis across America?????? pic.twitter.com/JGdurwkCSs

Stefanik highlighted Psaki's response as "out of touch."