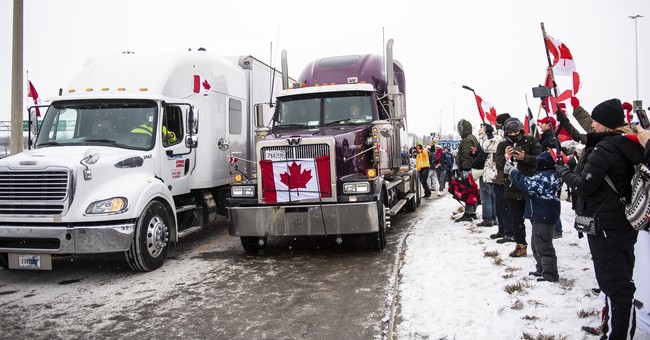 After threats of investigation of from Florida over failure to automatically refund donations to those who had donated to Canadian truckers, GoFundMe has decided to reverse course, Timothy Nerozzi reported for FOX Business. The crowdfunding site, which on Friday announced it had frozen the donations, was initially having those who donated request a refund, otherwise it was going to redistribute the donations to other charities.

It is a fraud for @gofundme to commandeer $9M in donations sent to support truckers and give it to causes of their own choosing.

I will work with @AGAshleyMoody to investigate these deceptive practices — these donors should be given a refund.

Gov. Ron DeSantis (R-FL) called the initial plan "a fraud" and tweeted on Saturday morning that he was going to work with Attorney General Ashley Moody "to investigate these deceptive practices."

The plight of Canadian truckers protesting vaccine mandates and other restrictions to do with the Wuhan coronavirus has taken a disquieting turn with GoFundMe freezing the approximately 10 million Canadian dollars. As if that were not bad enough, though, the funds will not be automatically returned to the people who made donations. Rather they have to request a full refund, and have until February 19, 2022, which is two weeks away.

At the request of Trudeau, @GoFundMe has just stolen $9,000,000 from the truckers. Rather than automatically refunding it to the donors, they say they’re going to give it to groups of their own choosing. What a windfall for Black Lives Matter, Greenpeace and Planned Parenthood! pic.twitter.com/prEwLnypfe

As Levant mentioned in his lengthy thread, and as I discussed on Sunday in light of news that Prime Minister Justin Trudeau had fled his home, the truckers have also been maligned by public officials and the media there.

And what a laugh that Trudeau’s CBC state broadcaster had just said that Putin was secretly interfering in the convoy. No, true foreign intervention was by Silicon Valley, only too happy to interfere in Canadian affairs to protect Trudeau.

GoFundMe says they received word from the Canadian government. Can we see it? Or is it a secret smear of the truckers? Or a threat -- or a promise -- to GoFundMe? Why the secrecy? Are they all in on this together?

Levant also tweeted how this says something about the truckers, who will not be deterred, but also the pro-mandate crowd as well.

This is how the pandemic/lockdown vaccine passports will work, though. Merge people's health choices (a proxy for their politics) with their digital footprint; link that to their finances, their ability to shop, rent, live. It's China-style social credit.

He even asked for outside foreign help, too.

I don't like foreign interference in Canada, from GoFundMe or anyone else. But our country's checks and balances no longer work. Trudeau is acting like a tyrant, destroying his political opposition. I think we need some help, even just from foreign media who aren't bought off.

Not only has Prime Minister Justin Trudeau accused truckers of furthering "hate, abuse, and racism," but other elected officials have smeared them, such as Ottawa Mayor Jim Watson, as has the police force. In addition to cracking down on the truckers, the police force is threatening officers with an investigation if they provide any kind of support to the truckers.

Communist Ottawa Police Chief declaring they're targeting the truckers and their supporters for prosecution, collecting registration numbers, phone records and checking financial services of truckers and anyone donating to their cause ?? pic.twitter.com/vJVh0ijmfB

Among tweeting other things about the truckers, which has been thoroughly highlighted by Convoy Reports at Rebel News, the Ottawa Police Force called on other crowdfunding sites to follow suit in blocking funds. Convoy Reports also pointed out that crime is actually down in Ottawa.

We want to thank @gofundme for listening to our concerns as a City and a police service. The decision to withhold funding for these unlawful demonstrations is an important step and we call on all crowdfunding sites to follow.

Canadian civil rights have been threatened throughout the pandemic in other ways, as well. Last month, Quebec announced it planned to impose a health tax on the unvaccinated. Those who were unvaccinated could also only shop in stores of a certain size while accompanied by employees, to ensure they only purchase food or pharmacy items, as Leah reported.

And, last May I covered the plight of Canadian Pastor Artur Pawlowski who was arrested, along with his brother, by a SWAT team, on a busy highway for "inciting" people to go to church despite lockdown orders.

If @gofundme took your donation, contact your state Attorney General. Don't just demand your money back. Demand a criminal investigation.

NewsBusters' Dan Gainor tweeted a recommendation that people who donated money contact their state attorney general and demand an investigation.