West Virginia Governor Has Message for Bette Midler and Her Insults 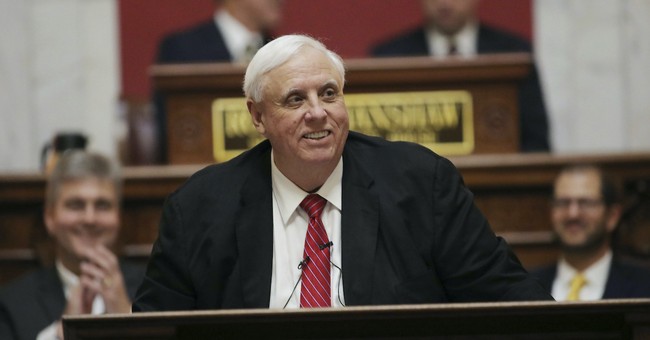 Gov. Jim Justice (R-WV) has a message for actress Bette Midler and those who would malign his state of West Virginia, and it has to do with his dog's rear end. During his Thursday State of the State address, Gov. Justice held his dog, Babydog, in the air, with her back to the audience and said for Midler to "kiss her hiney."

As a result, "Bette Midler" is now trending on Twitter.

Such a closing received laughter and a standing ovation from many in the chamber, though not all were pleased.

Justice's message for Midler was in response to a tweet from the actress last month when Sen. Joe Manchin (D-WV) indicated on December 19's edition of "Fox News Sunday" that he was against Build Back Better.

Midler's tweet from December 20, which claimed that West Virginis is "backward" and that Manchin "wants us all to be just like his state," which she referred to as "Poor, illiterate and strung out," is still up.

She tweeted an apology, of sorts, a short time later, after fierce backlash. The apology was more so for the people of West Virginia, though, as she still said Manchin "and his whole family are part of a criminal enterprise."

I apologize to the good people of WVA for my last outburst. I’m just seeing red; #JoeManchin and his whole family are a criminal enterprise. Is he really the best WV has to offer its own citizens? Surely there’s someone there who has the state’s interests at heart, not his own!

Midler responded by retweeting messages mocking Justice for such a move, including those doubling down on the mockery Midler tweeted out last month but claimed to be sorry about.

Here we can see a dog’s asshole.

Right next to it is the butt of Jim Justice’s dog. pic.twitter.com/Dt1FuWM60r

Way to go, Jim Justice! Nothing like proving Bette Midler right on national television. Did you REALLY show us your dog's asshole? REALLY? Thanks for conforming to all our worst stereotypes about Southern dumfuk men. https://t.co/4fGmd2HSce

Gov. Jim Justice gets mad at Bette Midler for saying that West Virginians are "poor, Illiterate, and strung out" - which, BTW, Data seems to suggest!

It's *almost* like he's too illiterate to use words.

While Midler and her ilk may be in favor of Build Back Better, polls show that Americans have real concerns with President Joe Biden's key agenda item, especially when it comes to fears that it will raise inflation. This includes in Manchin's state of West Virginia.