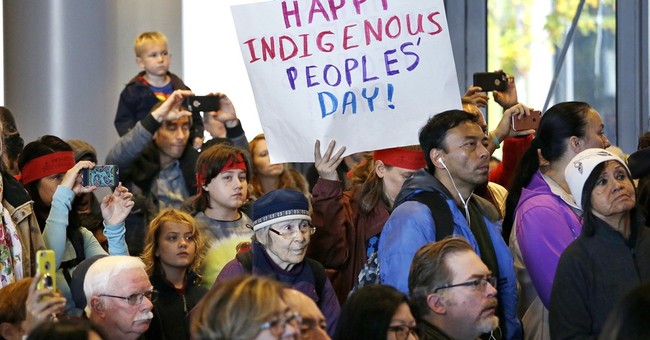 Zeke Miller and Ellen Knickmeyer in their reporting for the Associated Press, called it "the most significant boost yet to efforts to refocus the federal holiday celebrating Christopher Columbus toward an appreciation of Native peoples," and noted that "Biden’s announcement appeared to catch many by surprise."

The president took the opportunity to praise the contributions of indigenous peoples, but much of his proclamation also focused on condemning the past sins of America:

Our country was conceived on a promise of equality and opportunity for all people — a promise that, despite the extraordinary progress we have made through the years, we have never fully lived up to.  That is especially true when it comes to upholding the rights and dignity of the Indigenous people who were here long before colonization of the Americas began.  For generations, Federal policies systematically sought to assimilate and displace Native people and eradicate Native cultures.  Today, we recognize Indigenous peoples’ resilience and strength as well as the immeasurable positive impact that they have made on every aspect of American society.  We also recommit to supporting a new, brighter future of promise and equity for Tribal Nations — a future grounded in Tribal sovereignty and respect for the human rights of Indigenous people in the Americas and around the world.

Such language is something of a habit  for the Biden administration, from the president himself to those in his cabinet. U.N. Ambassador Linda Thomas-Greenfield is particularly critical of America while representing the nation before the United Nations, including among human rights abusers such as China.

"Indigenous people" slaughtered and enslaved each other mercilessly, stealing and conquering land whenever they could. We conquered their lands just as they had conquered the same lands. The law of conquest. All people, everywhere, lived by it.

The president likewise issued a proclamation for Columbus Day. While it paid tribute to Italian-Americans, this proclamation also was a condemnation, rather than a celebration of Columbus:

Many Italians would follow his path in the centuries to come, risking poverty, starvation, and death in pursuit of a better life.  Today, millions of Italian Americans continue to enrich our country’s traditions and culture and make lasting contributions to our Nation — they are educators, health care workers, scientists, first responders, military service members, and public servants, among so many other vital roles.

Today, we also acknowledge the painful history of wrongs and atrocities that many European explorers inflicted on Tribal Nations and Indigenous communities.  It is a measure of our greatness as a Nation that we do not seek to bury these shameful episodes of our past — that we face them honestly, we bring them to the light, and we do all we can to address them.  For Native Americans, western exploration ushered in a wave of devastation:  violence perpetrated against Native communities, displacement and theft of Tribal homelands, the introduction and spread of disease, and more.  On this day, we recognize this painful past and recommit ourselves to investing in Native communities, upholding our solemn and sacred commitments to Tribal sovereignty, and pursuing a brighter future centered on dignity, respect, justice, and opportunity for all people.

During Friday's press briefing, White House Press Secretary Jen Psaki emphasized that Biden was the first president to mark Indigenous Peoples' Day. She also mentioned "I’m not aware of any discussion of ending that — either of — ending the prior federal holiday, at this point.,."

Psaki, when asked if it was Biden's "wish" that Columbus Day no longer be a federal holiday, Psaki said "I don’t have any prediction of that at this point in time."

Columbus Day, a federal holiday, will be celebrated on Monday October 11.