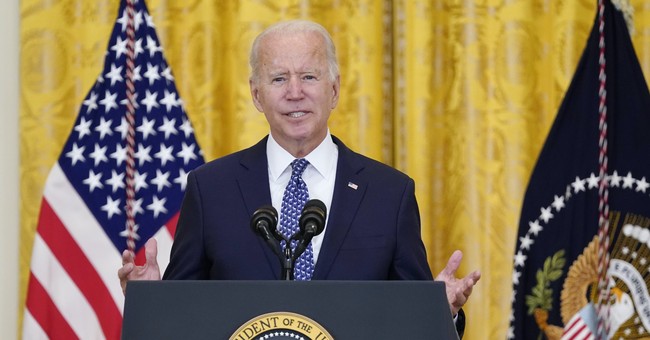 President Joe Biden announced new vaccine mandates during a cantankerous speech on Thursday. Such mandates are chilling, especially when the president claimed that "this is not about freedom or personal choice. It's about protecting those around you."

BIDEN: "This is not about freedom or personal choice." pic.twitter.com/uoOYPew4Me

There is not merely a mandate for federal employees and contractors, who White House Press Secretary Jen Psaki explained must be vaccinated or could be fired. The president is also expected to direct his Department of Labor, using Occupational Safety and Health Administration (OSHA), to issue a new rule mandating that private employers with more than 100 workers have a vaccine mandate or have their employees submit to testing at least once a week. Such a rule could carry with it a $14,000 fine for each violation.

Biden to direct the Labor Department to develop rule requiring any employer with 100 or more employees to get their workforce vaccinated or require unvaccinated employees to test negative on "a weekly basis."

The requirement could carry a $14,000 fine per violation and would affect around 100,000,000 workers, two-thirds of the country's workforce, the official says.

These new actions are also a break from assurances made by then President-Elect Biden in December. As Michael W. Chapman called to mind in a piece for CNSNews.com shortly before the president's speech.

He added, "Just like I don't think masks have to be made mandatory nationwide."

"I'll do everything in my power as president of the United States to encourage people to do the right thing and when they do it, demonstrate that it matters," said Biden.

As Spencer reminded us in another flashback piece, Psaki herself told a reporter during a July 23 press conference--mere months ago--that issuing mandates is "not the role of the federal government." Rather, it "is the role that institutions, private-sector entities, and others may take. That certainly is appropriate. Also, local communities are going to take steps they need to take in order to protect people in their communities. What our role is and what we are going to continue to do is make the vaccine available."

The president has been all about "encouraging" people to "do the right thing," or at least he used to be. Biden is no longer merely asking or encouraging now, though.

That such mandates were coming was announced Thursday morning via news reports, and was also confirmed by Psaki.

Shortly after the president's remarks, where he did not take questions, 'Dictator Biden' was trending on Twitter. It served as another flashback, this time for those who claimed that former President Donald Trump was or would at least become a dictator.

Joe Biden is the fascist dictator the left tried desperately to make you think Donald Trump was.

Irony: The people who called Trump a dictator are supporting Biden telling private business, federal workers and ordinary citizens they must take a government prescribed, one size fits all medical treatment for a virus with 99.8% survival rate

Once again, Joe Biden shows himself to be everything the left falsely accused Donald Trump of being. They called Trump a dictator. But it’s Joe Biden who over and over makes it clear: he’s a lawless President who will trample over the constitution to achieve his partisan goals.

Y’all told us Trump was the dictator. You got played. Ironically this is the amount of people they said voted for Biden. I’ve never been so disgusted at the thinking skills of Americans. https://t.co/9tJ8AKIPBa