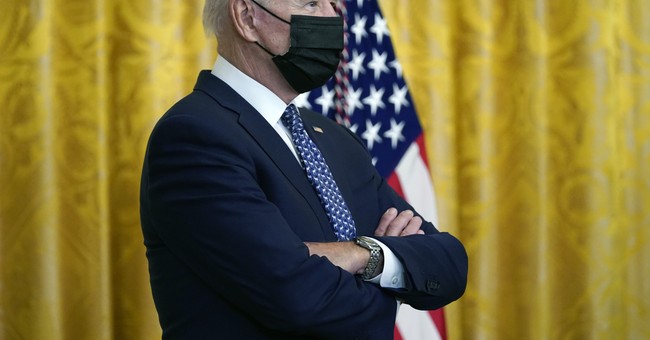 In addition to announcing a vaccine mandate for federal employees on Thursday, President Biden is expected to ask the Department of Labor to issue a new rule requiring vaccine mandates for private employers with more than 100 workers, or regular testing.

The requirement could carry a $14,000 fine per violation and would affect around 100,000,000 workers, two-thirds of the country's workforce, the official says.

All staff at health care facilities will also be required to be fully vaccinated in order to get reimbursed by Medicare and Medicaid, according to NBC News.

Despite saying in December as president-elect that he would not mandate vaccines, Biden has struck a completely different tone as the Delta variant surges across the country and his approval on handling the coronavirus has fallen.

In December, Biden said he “wouldn’t demand it be mandatory.” pic.twitter.com/a0Qm38FYGg

A recent ABC News/Washington Post survey found his handling on the pandemic is at 52 percent, which is down 10 points from where it stood in June at 62 percent.

Republican lawmakers have said the mandates are a step too far.

Mandates are cheap governance. The right path is built upon explaining, educating, and *building* trust, including explaining the risks/benefits/pros/cons in an honest way so a person can make their own decision.

The Biden Administration has completely failed in that regard.

OSHA has no more authority to enforce this (there’s no statutory authorization) than CDC had to issue the eviction moratorium. Which is to say they both have ZERO authority to do these things. Congress makes the laws in a constitutional republic.

This is an ASSAULT on individuals' freedoms and livelihoods.

We must fight this.

He doesn’t have the power to mandate this. If government could mandate the vaccine for federal employees & contractors, it would require a vote of Congress. It’s medical tyranny.

People will remember those who did this to them & who did not speak out.https://t.co/WVqGnxAX25