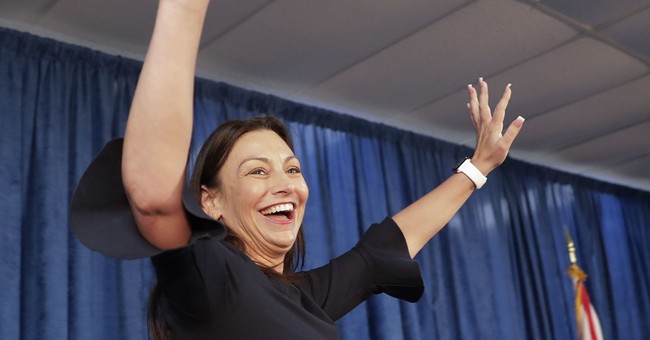 Democrat Nikki Fried, Florida's agriculture commissioner,  announced on June 1 that she was challenging Gov. Ron DeSantis (R-FL) for 2022. Bruce Ritchie warns in POLITIO that "She could take down Ron DeSantis. But that doesn’t mean the left likes her," even though Fried "has attempted to brand herself as the future of Florida's Democratic Party."

Ritchie begins his piece by bluntly pointing out "Democrat Nikki Fried should be the greatest ally to Florida’s environmentalists and progressives. Instead, she’s their biggest disappointment." He also later writes "But over the two-and-a-half years she’s been in office, they say she hasn’t acted on left-leaning policies like climate change and energy efficiency or fought hard enough against Republicans."

Who is one of those disappointed? A public supporter of her primary challenger. Charlie Crist, Republican turned Independent turned Democrat, who is running to be governor, again, this time as a Democrat.

"While Commissioner Nikki Fried talks a good game about climate change, our review of actual accomplishments do not add up to the rhetoric," said Susan Glickman, Florida director of the nonprofit Southern Alliance for Clean Energy. SACE has not endorsed a candidate in the race, but Glickman appeared in a campaign video on behalf of Rep. Charlie Crist (D-Fla.), who is also running for governor.

"Given the severity of the climate crisis," Glickman said, "we're way past the time for talk without significant actions to solve the problem."

There's more where such criticism comes from, though, from progressives as a whole:

Yet the recent criticism from environmental activists and progressives — who were furious that Fried initially wouldn’t support a minimum wage increase — could hurt her aspirations to unseat the popular Republican governor. The race will be one of the most high profile gubernatorial contests in the nation next year, and Florida Democrats have struggled to find a candidate who can beat DeSantis, especially after popular Rep. Val Demings (D-Fla.) decided to skip a bid for governor and run for Sen. Marco Rubio’s seat instead.

Fried, the only Democrat elected to statewide office in Florida, oversees 19 offices that regulate an odd assortment of issues, from renewable energy and pesticides to concealed weapons permits and even roller coasters. But it’s her record on the environment and progressive issues that Florida’s activists are most critical of.

"When you have a base of voters you are trying to court who happen to be these Black, brown folks from marginalized, historically disenfranchised communities, it is difficult to turn around and say, 'I got your back' when you haven't been at the forefront of these issues," Bullard said.

When it comes to specific concerns, there's Jane West, the policy director for the growth-focused non-profit 1000 Friends of Florida, who hasn't seen the specifics she's looking for from Fried.

Other complaints are that various would-be supporters are disappointed in her lack of action and failure to meet expectations, as well as a delay overall when she does communicate such support for progressive causes:

"When you have a base of voters you are trying to court who happen to be these Black, brown folks from marginalized, historically disenfranchised communities, it is difficult to turn around and say, 'I got your back' when you haven't been at the forefront of these issues," Bullard said.

People are really angry with Fried when it comes to the minimum wage, too:

Progressives, like Florida Democratic donor John Morgan, were especially livid over Fried’s non-committal position on a proposed $15 minimum wage. Fried doesn’t have control over the state’s minimum wage, but as the state’s top elected Democrat, activists looked to her for moral leadership.

Business interests had lined up against the wage bump and as the increase was being fought, Fried told the Tampa Bay Times that she was undecided.

Morgan publicly decried Fried’s "very weak, tepid response" in support of the measure right before voters approved it last November — an example of Fried leading from behind.

"That bulls**t, that doesn't work with me," Morgan, who put $6 million behind the effort to raise the minimum wage, said after the vote. "To me Nikki Fried has disqualified herself from any future for statewide office in the Democratic Party. And I'm sorry to say that because I really thought she had a bright future.”

The takeaway is that infighting and concerns that this Democrat isn't woke enough could spell her doom.

Gov. DeSantis, who Ritchie admits is "popular," has already written off Fried. As Matt reported, the "popular" sitting governor has said about Fried that "All she does is emote on social media, virtue signal to small dollar donors in California and New York," also calling her a "lockdown lobbyist."

Fried has also denounced the freedom-loving sitting governor as someone who is starting a "race war," Reagan reported, when it comes to DeSantis' opposition to letting Critical Race Theory corrupt young Floridians.

Further, as Reagan also reported, Fried even refuses to give DeSantis any credit when it comes to how, as CNN's Poppy Harlow pointed out, "Florida has a 4.8 percent unemployment rate, well below the national average. The per-capita death rate from COVID-19 is 27th, nowhere near the highest."