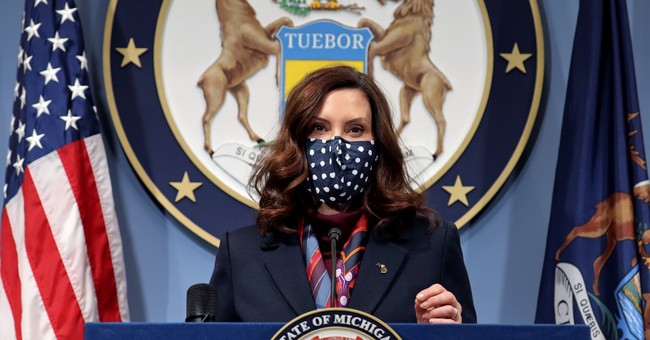 Source: Michigan Office of the Governor via AP, File

The reign of Gov. Gretchen Whitmer (D-MI) may soon be limited. As Paul Egan with the Detroit Free Press reported, the Michigan Supreme Court ruled that the Board of State Canvassers has to certify a voter initiative to repeal the Emergency Powers of Governor Act, which the Whitmer will not be able to veto when Republicans move to do so with a majority of votes in each chamber.

More from Egan on the law and its likely fate:

Whitmer used the 1945 law extensively to issue  emergency orders related to the coronavirus pandemic until Oct. 2, when the Michigan Supreme Court struck down the law as an unconstitutional ceding of legislative power to the executive branch of government.

Although the law is no longer in effect, Democrats want to keep it on the books, apparently in the hope that the Michigan Supreme Court might reverse the October decision. The makeup of the court has shifted since then, from a 4-3 majority for Republican nominees to a 4-3 majority for Democratic nominees.

The group behind the initiative is Unlock Michigan, which celebrated the ruling:

"The court has it exactly right — the Board of State Canvassers had a clear legal duty to certify what was obvious, that we had collected far more signatures than required," said Fred Wszolek, a spokesman for Unlock Michigan, the group behind the petition drive.

Wszolek said Whitmer used the 1945 law "recklessly to crush businesses, families and lives," and "no governor should be able to do so ever again."

The order, which was unanimous, was necessary because in April the two Democrats on the Board of State Canvassers wanted to further investigate the validity of the signatures for the voter initiative. However, as Egan reported:

The Bureau of Elections staff recommended the board certify the petition. Based on a sample of signatures that it analyzed, staff determined that Unlock Michigan had submitted in excess of the just over 340,000 valid signatures required back in October. Staff estimated the total number at just over 460,000.

But the two Democrats on the board wanted to launch an investigation into whether the signatures were collected properly, despite the fact that Attorney General Dana Nessel announced April 21 that she had concluded a months-long investigation into Unlock Michigan without bringing criminal charges.

The court's order said an investigation into the petition drive sought by Democratic members of the elections panel went beyond the board's powers.

Nassel is the Democratic Attorney General of Michigan.

There is plenty to say about the ways in which Gov. Whitmer has abused her power, which in a lot of ways comes down to "rules for thee but not for me," which the Republican Governors Association is using as an ad come 2022, as Reagan reported.

Believe it or not, Whitmer is actually running for re-election, though, as Reagan also highlighted, her approval rates are plummeting.