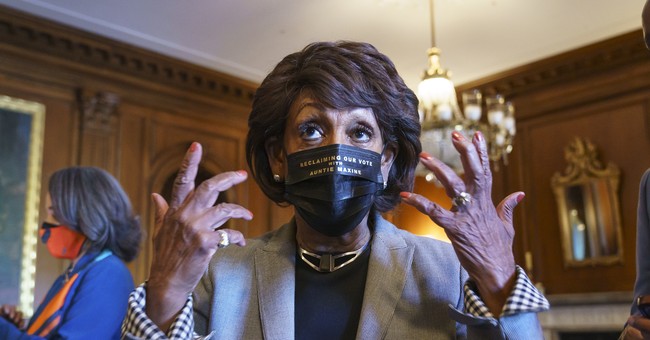 Rep. Maxine Waters (D-CA) continues to double down on her remarks last weekend in Brooklyn Center, Minnesota, where she incited further riots if the verdict in the Derek Chauvin trial was not to the mob's liking. The sitting congresswoman traveled across state lines, with a police escort, and broke curfew to be out in the streets, where she encouraged others to do so. Hours after she did so, Minnesota National Guardsmen were shot at. In addition to fear of violence if Chauvin was not found guilty for two charges of murder and one charge of manslaughter--which he was, of all three--many feared there would be jury influence and intimidation. While on CNN's "Newsroom" with Jim Acosta, Rep. Waters claimed that Judge Peter Cahill in the Chauvin trial was "angry" and frustrated" and that there was no jury interference

"I talked with a lot of legal scholars and lawyers and of course he was way off track. He knows that in fact, the jurors were not in the room. The jurors had an oath not to look at television, not to read the newspapers, not to engage with people on this. So he knows that there was no interference with the jurors," the congresswoman said. "To say that I'm going to cause an appeal really is not credible. And whether or not they have an appeal, even if they mention my name, like the judge says, my comments don't matter anyway."

"Confrontational does not mean violence," Rep. Maxine Waters says about her comments on the Chauvin trial, adding that the judge saying "that I'm going to cause an appeal really is not credible.” https://t.co/hYv6QN8gQc pic.twitter.com/V17uOx85RE

Wouldn't you also be "angry" and "frustrated" if you're trying to preside over a fair trial and some sitting member of Congress is going far beyond her bounds of the legislative branch to insert her opinion where it doesn't belong? Honestly, I thought Judge Cahill was rather subdued in his remarks. He also didn't even declare a mistrial. As Spencer reported, here's what the judge said:

I’m aware of the media reports. I’m aware that Congresswoman Waters was talking specifically about this trial and about the unacceptability of anything less than a murder conviction and talking about being confrontational, but can you submit the press articles about that.

This goes back to what I’ve been saying from the beginning. I wish elected officials would stop talking about this case, especially in a manner that is disrespectful to the rule of law and to the judicial branch and our function.

I think if they want to give their opinions, they should do so in a respectful and in a manner that is consistent with their oath to the Constitution, to respect the co-equal branch of government.

Their failure to do so I think is abhorrent, but I don’t think it’s prejudiced us with additional material that would prejudice this jury. They have been told not to watch the news. I trust they are following those instructions and that there is not in any way a prejudice to the defendant beyond the articles that were talking specifically about the facts of this case.

A congresswoman’s opinion really doesn’t matter a whole lot. Anyway, so, motion for mistrial is denied.

Judge Cahill further address Rep. Water's remarks in pointing out "Congresswoman Waters may have given you something on appeal that may result in this whole trial being overturned."

Does Judge Cahill really know there was no jury interference? Does Rep. Waters? Do any of us? Actually, the evidence contradicts the claims Rep. Waters made to Acosta. Katie reported on an alternate juror who shared with KARE 11 that she "did not want to go through rioting and destruction again and I was concerned about people coming to my house if they were not happy with the verdict."

And, as Leah reported, Defense Attorney and Law Professor Alan Dershowitz was also very much worried about the possibility of jury intimidation, saying that Rep. Waters tactics "borrowed precisely from the Ku Klux Klan." He's even predicted the sentence will be overturned by the U.S. Supreme Court.

Speaking of Judge Cahill, yesterday he ordered the jurors' identities to be sealed as the attorneys had gotten an '"unprecedented levels of emails regarding the case" which were "frequently of incendiary, inflammatory, and threatening [in] nature." The court order read that "continuing restrictions on public disclosure of the jurors' identities remain necessary to protect those jurors desiring to remain anonymous from unwanted publicity or harassment."

Acosta, in a move which does not surprise me one iota, also invited Rep. Waters to further play the victim in this scenario, by bringing up her Thursday op-ed in the Los Angeles Times "I’m not new to this," which involves the congresswoman claiming she's "nonviolent." She also claimed that "Now, because of who I am, the right wing and members of Congress who subscribe to the views of groups like QAnon, the Oath Keepers, the Proud Boys and the KKK have targeted me. Those very people have done so to divert attention from the fact that they aided and abetted a violent, domestic terrorist insurrection led by Donald Trump."

Rep. Waters told Acosta on air that she's received death threats. Let me be clear that I don't condone death threats, against anyone, but that the congresswoman can't seem to fathom that her words could bring about death threats against others baffles me. Then again, it shouldn't.